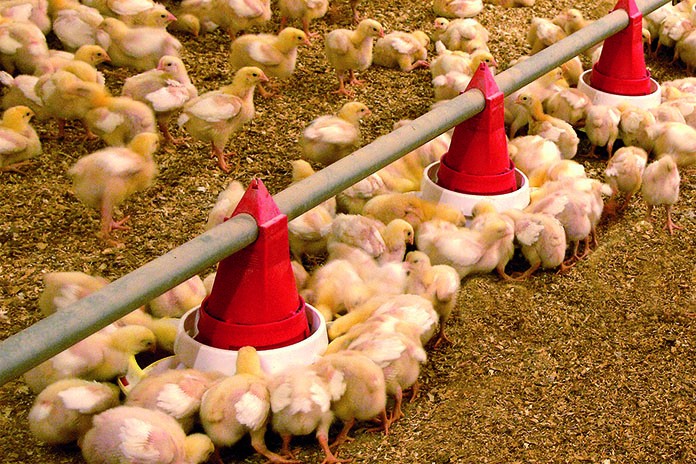 Assessing the health and welfare of growing broiler chickens is mainly done post mortem, using measures taken at the slaughter plant (% birds with hock burn and pododermatitits) or total pre-slaughter mortality.
For a minority of flocks, the gait (walking ability) of living birds is also assessed but this process is very labour-intensive and has been criticized as subjective.
A system of automatically monitoring the welfare of chickens throughout their lives has been developed, thus giving farmers a continuous readout of the state of their flocks in real time and, more importantly, allowing them to detect the early signs of problems and so to intervene before these become serious.
Using video and smartphones inside commercial broiler houses, it has been shown that the movements of growing broiler flocks give rise to patterns of ‘optical flow’ that can be analysed statistically and correlate with key welfare outcomes such as mortality, hockburn, pododermatitits and the proportion of a flock with poor gaits. The main aim is to develop am inexpensive and easy to use tool to help producers to manage their flocks for greater health, higher welfare and greater efficiency. It does not replace good stockmanship but is an aid to even better management, with the potential to target interventions and reduce total medication.
The optical flow algorithm measures the rate of change of image brightness. It does not track individual birds but gives an indication of the state of the whole flock. The algorithm is simple enough that it can be run on a smartphone, which delivers four measures every 15 minutes: mean, variance, skew (deviation of mode from mean) and kurtosis (which indicates extreme or unusual events and a lack of uniformity in the flock movement).
Flocks with low mean and high kurtosis are associated with higher mortality and increased incidence of hockburn and poor gaits. In other words, such flocks move less overall and have less uniform movement. By contrast, healthy flocks (low mortality, low incidence of leg and walking disorders) have high mean and low kurtosis. By combining the four measures (mean, variance skew and kurtosis) it is possible to predict in flocks as young as three days which ones will develop high levels of hockburn at slaughter.
From the APSS proceedings.