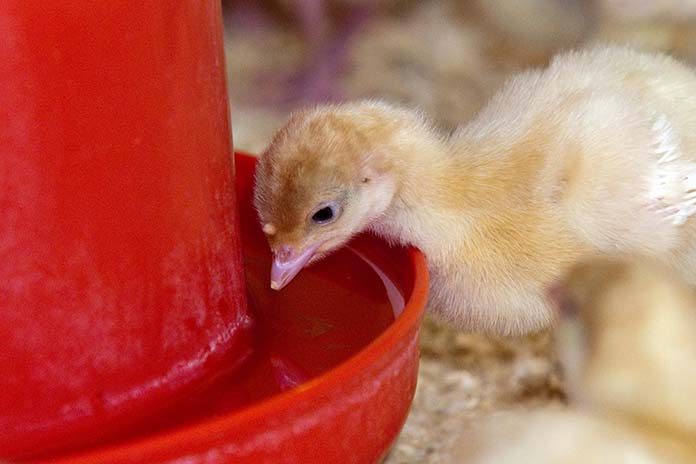 Types of mycotoxins
There are more than 400 known mycotoxins. The mycotoxins of most importance to poultry are mainly produced by fungi of the genera Aspergillus, Fusarium and Penicillium and are produced either pre-harvest, during harvest or in storage or during feed processing whenever conditions are favourable. Stress factors such as drought, poor fertilization, high crop densities, weed competition, insect or mechanical damage at harvest, and storage conditions can affect the plant or grains natural defences and help to promote the development of the fungal infection and lead to mycotoxin production. Different species show varying susceptibility to mycotoxins. Poultry are highly susceptible to T-2 Toxins and moderately sensitive to Aflatoxins and Ochratoxins. However, within poultry species turkeys are more susceptible to aflatoxins than broilers but in most cases the younger the birds the more susceptible they are. Some fungal strains are capable of producing more than one mycotoxin and also a single mycotoxin is produced by more than one fungus. The most important mycotoxins for poultry and the fungi that produce them are shown in Table 2. Aflatoxins
Aflatoxins are the most widespread and most studied group of all mycotoxins. The toxin occurs in warm and humid climatic conditions and is not considered a problem in colder climates however the global availability of feed stuffs means contaminated materials can occur anywhere in the world.
Aflatoxin B1 is the most common and biologically active of all the aflatoxins and causes decreased growth, egg production and mortality. Clinically the signs are anorexia, visceral hemorrhages embryo toxicity and increased susceptibility to stressors. Histopathology of turkeys reveals fatty liver, liver necrosis and bile duct hyperplasia. Aflatoxin B1 also suppresses the immune system and reduces vaccine response (Peng et al. 2015, Valchev et al. 2017). Aflatoxins decrease the activities of several digestive enzymes resulting in reduced feed conversion efficiency. Aflatoxins are known to interfere with vitamin D metabolism contributing to reduced bone strength and leg weakness (Hamilton, 1987). Suppression of hepatic protein synthesis is the main factor resulting in growth suppression and reduced egg production. Aflatoxins are also associated with poor fertility and hatchability. Perhaps the most important effect of aflatoxins is the immune suppressing effect (CAST, 2003) and consequent vaccine and therapeutic drug failures. Immunosuppresion can also occur at levels of mycotoxins that are undetectable by routine screening methods, (Chen et al., 2017). Table 3 shows the effect of two levels of Aflatoxin B1 (with and without a toxin binder) on haemagglutination titres Newcastle Disease in young turkeys. Aflatoxicosis has also been shown to increase the susceptibility to salmonellae infection (Devegowda and Murthy, 2005). The effects of aflatoxins on bird performance are dose dependent (see Table 4).

Perhaps the most important effect of aflatoxins is the immune suppressing effect (CAST, 2003) and consequent vaccine and therapeutic drug failures. Immunosuppresion can also occur at levels of mycotoxins that are undetectable by routine screening methods, (Chen et al., 2017). Table 3 shows the effect of two levels of Aflatoxin B1 (with and without a toxin binder) on haemagglutination titres Newcastle Disease in young turkeys. Aflatoxicosis has also been shown to increase the susceptibility to salmonellae infection (Devegowda and Murthy, 2005). The effects of aflatoxins on bird performance are dose dependent (see Table 4).

Type A trichothecenes (T-2 toxin, HT-2 toxin, diacetoxyscripenol) are a major concern. They impact bird health and welfare, and cause economic losses in productivity. They can be found in cereals and cereal by-products and feeds. They cause oral lesions dermatitis (see Figure 1ab) and intestinal irritation (Wyatt et al., 1975). T-2 toxins reduce feed intake, they are often referred to as ‘the feed refusal’ toxins, reduce body weight, egg production, egg shell quality and regression of ovaries in laying birds (CAST, 2003). The effect of T-2 toxin on laying hen performance has been demonstrated at different dosage levels (see Table 5). T-2 toxins have also been known to cause gizzard erosions and necrosis of the proventricular mucosa. They are the second most immune suppressive mycotoxins after aflatoxins, occurrence of both toxins is the most immunosuppressive combination of toxins (Raju and Devegowda, 2002).

Ochratoxin type A (OTA) is a common contaminant in a variety of feedstuffs, OTA is produced mainly by aspergillus species. It is a nephrotoxin significantly depressing feed intake, growth, feathering, egg production and feed conversion efficiency (Hamilton 1982). OTA has been found to be teratogenic in several species, craniofacial abnormalities of the offspring being the most common signs (Malir et al., 2013). Anecdotal evidence suggests that OTA can result in significant embryonic loss and alformations in the field (see Figure 2). Egg shell quality can be affected along with yellow staining of egg shells and blood spots (Shirley and Tohala, 1983). OTA is three times more toxic to young birds than aflatoxins. Severely affected birds show urate deposits in joints and in the abdominal cavity. Acute OTA toxicity results in acute renal failure leading to death.

Zearelenone (ZEA) and Deoxynivalenol (DON)
Zearelenone is responsible for reproductive disorders due to its estrogenic effect at high concentrations. Poultry are quite resistant to Zearelenone however at high concentrations vent enlargement and enhanced secondary sex characteristics are seen. Layers are considered resistant to Zearelenone even when fed at up to 800mg/kg (Allen et al., 1981) however Zearelenone will contaminate eggs, which is a concern in terms of reproductive performance, chicks derived from hens fed Zearelenone contaminated feed contained ZEAs (Bergsj et al., 1993). Poultry are quite resistant to DON however there is an association with reduced feed intake in layers and breeders, the toxin is sometimes considered an indicator that other more potent Fusarium are present.

Co-contamination of feeds by mycotoxins
Co-contamination of mycotoxins appears to exert greater negative impact on health and productivity than do single toxins, for example both aflatoxin and ochratoxin are extremely toxic to poultry and they act synergistically. The toxicity resulting from dual exposure to aflatoxin and ochratoxin is much greater than the sum of their individual toxicities. The effects of T-2 and DAS were additive in laying hens for feed intake, oral lesions, mild changes in plasma enzyme activities and reduced egg production (Diaz et al., 1994).
Fungi do not occur in feedstuffs as pure cultures so the number of possible combinations of toxins is very significant. The scientifically established co-contaminants are listed below (see Table 6); The key point is that a feedstuff testing positive for a particular toxin signifies that growing conditions were favourable not just for that fungi but also for others. Therefore testing the feedstuff for other co-contaminants is important.

Mycotoxin Testing
A rigorous testing schedule should be put in place to continuously assess the mycotoxin threat to the feed stuff and also assist identifying contaminated lots.
There is significant variability in the process of testing for mycotoxins brought about by the variability in sampling, sample preparation and analytical variation. Table 7 shows the variability associated in measure ng aflatoxin in a lot of contaminated corn, variation through sampling contributes to over 75% of the overall error of testing (Whitaker et al., 2005).
Sampling error is large because of the extreme distribution among contaminated particles within a lot, it is estimated that only 6 kernels in 10,000 are contaminated in a lot containing a concentration of 20ppb aflatoxin (Johansson et al., 2000b). A single spot sample or probing point is satisfactory if the contaminated particles are evenly distributed through the lot, however mycotoxins generally occur in isolated pockets through the lot (Shotwell et al., 1975). Increasing the number of samples taken from a lot can increase the chances of identifying contaminated lots. Procedures used to take a sample from a bulk lot are extremely important, every individual item in the lot should have an equal chance of being chosen. The sample should be an accumulation of many small portions taken from many different locations throughout the lot (Bauwin and Ryan, 1982; Hurburgh and Bern, 1983). When drawing a sample from a bulk container a probing pattern should be developed so that product can be collected from different locations in the lot. An example of a probing pattern used by the USDA is shown below (Figure 3):
The sampling probe should be long enough to reach the bottom of the container when possible. When sampling from a moving stream, e.g. a moving belt, small increments should be taken along the entire length of the moving stream. Composite all the increments to obtain a bulk sample, if the bulk sample is larger than required then blend and subdivide the bulk sample to obtain the desired size test sample. Rapid strip tests: Analyses of feedstuffs for presence of mycotoxins can be conducted efficiently through the use of enzyme linked immunosorbent assays (ELISAs) testing kits and have become a standard tool for rapid monitoring of mycotoxins (Molinelli et al., 2009b). This method is satisfactory in order to establish if a specific feed stuff is either under or over a legal compliance level.
HPLC and GC-MS analyses provides more accurate determination of the level and type of mycotoxins present in the feedstuff. Some toxins can escape detection as they may be masked by glycosides or proteins which are attached to the toxin giving a false negative result, more refined analyses methods are required to measure such toxins. Bio-assays are used to establish presence of specific mycotoxins, an example is using crustacea such as artemia saline (see Figure 4) and assessing survival rate from a sample of material (Hardwig and Scott, 1971; Meyer et al., 1982).

Preventative approaches
Assessing the mould levels of grain can indicate the likelihood of mycotoxins occurring.
Testing the material for the level and type of mould can sometimes indicate what the likelihood of mycotoxin contamination may be. However it is possible that moulds may no longer be present in the material but the mycotoxins are, the best practice is to analyse for both moulds and mycotoxins.
Damage or stress to the plant by diseases, insect or bird damage, weeds, frost or drought permits easy entrance of moulds and fungi, and promotes rapid development of moulds. Insect damaged grain is more vulnerable to mould growth so reducing insect infestations is critical in preventing mould growth in grains. Some toxins such as aflatoxins tends to occur in broken and damaged kernels and in foreign material.
Avoid harvesting grain at an excessively high moisture content and keep in a holding bin using forced air to keep cool, store the grain in weatherproof well ventilated facilities and monitor the temperature of stored grain. Drying the grain slowly and at low temperatures for long periods promotes aflatoxin development. All handling equipment and storage facilities must be kept well ventilated and clean and dry prior to and during use. Storage facilities must be free of moisture leaks and all residue removed to reduce contamination.
Applying liquid or dry mould inhibitors, use of organic acids such as propionic acid and ammonium isobutyrate will prevent mould growth if correctly applied as it is augured into the silo. However organic acids will not destroy toxins already present in the grain (Hammond and Sumner, 2009). Visual assessment of the lot
Look out for visual clues of contaminants, grains can show signs of mould growth (see Figure 5) and / or insect damage and presence of ‘fines’, which are associated with mould growth.

Cleaning
During the cleaning process of contaminated grain dust, husks, hair and shallow particles are blown away by aspiration or scouring. Grain cleaners have been shown to reduce the level of aflatoxin in maize grain by as much as 50%.

Biotransformation
Biological detoxification by enzymes and/or microorganisms degrades mycotoxins within the gastrointestinal tract, before resorption into the animal occurs. There are now enzyme and microorganism based products effective in transforming specific toxins such as Fumonisins and Trichothecenes into nontoxic metabolites.