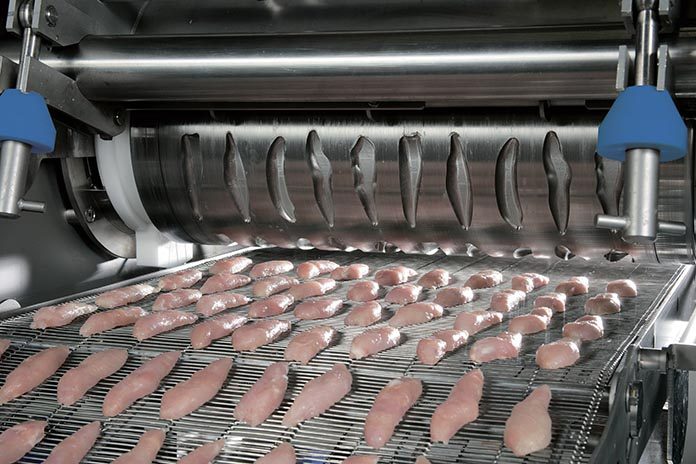 In the U.S., poultry is widely popular by consumers and is the top protein consumed. In the last decade along with improvements in growth performance (including breast yield), producers have extended growth periods, all in efforts to increase bird size. The increased size allows for more kilograms per man hour to be processed thereby reducing cost and improving process efficiency.

Zuidhof reported that that from 1957 to 2005 broiler weights quadrupled and breast meat yield (Pectoralis major) increased by approximately 80%.
In the U.S., the average live weight of birds in this segment is now over 6 lbs. The big bird (>6 lbs.) market segment makes up 55% of the overall market (based on number of head produced) in the U.S., with approximately 70% of the broiler meat in the U.S. coming from large birds. This trend for increased bird size and the increased percentage of the market will likely continue.
Producing an adequate supply of broiler meat is a primary goal of the industry, but producing high quality meat is also an important goal. In recent years, the industry has observed an increase in growth related myopathies associated with the breast meat which have become a serious economic issue. Specifically, the two major issues that have become most apparent in recent years are white striping (WS) and woody breast (WB) muscle. The severity of the conditions can vary, and both have been associated with heavier, fast growing birds, especially from high breast yielding broiler strains. These myopathies are issues around the world that have major economic implications, based on 10 to 40% incidence of moderate/severe cases, depending on size and/or strain of bird. These severe cases can result in unnecessary condemnations, decreased meat quality and yield, changed nutritional content, and continued reduced customer/consumer acceptance (resulting in lost customer accounts, leading to losses of $200 million (conservative estimate). Furthermore, in the past year, there has been increased consumer awareness (general public) about white striping and woody breast in poultry meat through articles/advertisements published by national news and social media. While some reports are fact-based, others have had a negative sensationalistic aspect along with misinformation. This increased consumer awareness, especially based on misinformation, can lead to decreased acceptance of poultry meat in a variety of markets.

Woody breast
One of the current major quality defects in the broiler industry is a defect referred to as “Woody” or “Wooden” breast (Figure 1). The condition can be characterized by breast tissue that is hard to the touch. This hardness can be present in the live bird prior to processing and even in the growout period as early as a few weeks old (detected by palpation) in addition to the postmortem period. The degree of hardness can be identified using tactile evaluation and a scoring system can be used to categorize fillets. Briefly, some fillets can be hardened throughout with very limited flexibility (severe) while others can be hardened but with some flexibility toward the mid part of the fillet (moderate). Mild fillets would have slight hardness in the cranial region and normal fillets would be flexible throughout (no hardness present). Sihvo reported that hard, or woody, fillets accompanied by presence of white striping had histological signs of myofiber degeneration and connective tissue accumulation (i.e., fibrosis). Petechial haemorrhaging can also be observed on the surface of fillets. These are the similar to characteristics observed with white striping alone. Initial observations suggest that when severe woody and severe white striping are found together, the histology shows markedly greater changes than when each is considered alone.

Meat quality
These defects can cause potential problems with processing methods such as deboning, portioning and even problems with marination in terms of pickup along with sensory qualities. More recent research showed as that severity of WS or WB increased, marination uptake decreased, and cook loss of non-marinated and marinated fillets both increased with increasing severity of WS or WB. Texture can be greatly impacted with WB having a crunchy, fibrous, and chewy texture. Numerous major restaurants have been receiving consumer complaints associated with poor texture (e.g., rubbery, chewy, tough) of chicken breast products. More of these restaurants are now requiring plants to sort fillets to eliminate or limit the amount of woody breast they receive. The hardness of fillets, as well as the prominent ridge associated with WB, can also cause problems with portioning processes. The hardness associated with WB decreases over time (e.g., through 8 days); however, this is not likely to change the cooked meat quality attributes associated with WB.
Grinding and forming patties with woody breast meat may be a way to use the product, to improve product quality over WB whole muscle products. However, recent studies have shown that severe woody breast should be mixed with meat with normal or mild characteristics of WB, as it can still have negative meat quality attributes when used at 100% in formulation. Other ground products such as sausages may also be alternatives to using WB as whole muscle.

Detection and sorting
On-line process control is a developing area for poultry processing because it can allow processors to have more real time process control. The use of a non-destructive and non-contact technology could provide a powerful real-time tool to assess woody breast. There is ongoing research to evaluate various methods to detect WB in the plants through the use of image analysis. Vision grading systems already exist in the industry and this may be an avenue for implementation of new concepts for the detection of WB at various points in the plant (carcass to fillet). Certain carcass features are highly related to woody breast and can be used for detection purposes. The use of instrumental compression force may also be another tool to detect and sort WB in the plant. Compression force has a high correlation (rs=0.79) to WB categories. Other technologies are also in current development in other labs including image analysis of fillets (USDA ARS) and compositional analysis of meat (Auburn University). Not only could detection in plant allow plants to divert product as necessary, but it could also be used a feedback tool to determining factors in live production (e.g. flock characteristics, flock performance, environment, etc.) that contribute to woody breast incidence.
For cooked product analysis, shear analysis has not always been effective in distinguishing between normal and WB though compression type methods (Warner-Bratzler, blunt Muellenet-Owens) have more success. Still, the varying levels of WB (norm, mild, moderate, severe), are not always detected. However, measuring peak counts from the data curve of the Meullenet-Owens razor shear (MORS) method has been useful at distinguishing between varying levels of severity of WB. Specifically, the blunt version of MORS was able to detect differences between three categories of normal, mild and severe WB. The WB is associated with greater number of peaks, which is likely related to the increased collagen and resulting fibrous or crunchy texture in the WB.

Conclusion
As growth rate and breast yields improve in the modern broilers, product defects will also continue to be present and will potentially worsen. While performance in live production is important, the industry must not lose sight on the fact that a high quality end product must be reduced. Live production gains cannot be at the expense of the processing sector. The question for our industry should be, “how do we maintain yield while maintaining or returning to high quality breast meat?” To answer this, strategies in both the plant and in live production should be evaluated. In the short term, it is possible to sort fillets manually in processing plants and even evaluate automatic online systems for future sorting. Fillets determined to be severe for these defects may be diverted into products, such as comminuted, that are less impacted by appearance or reduced functionality relative to whole fillets. In live production, evaluating strategies to slow down growth rate overall, or at strategic times, may be worth investigating though this would be a short term mitigation strategy. Though some yield may be sacrificed in the short term, the breast meat quality defects may also be significantly reduced. In the long term, it is important for research to continue to determine the root causes of the issues in order to decrease the incidence or severity in broiler meat.