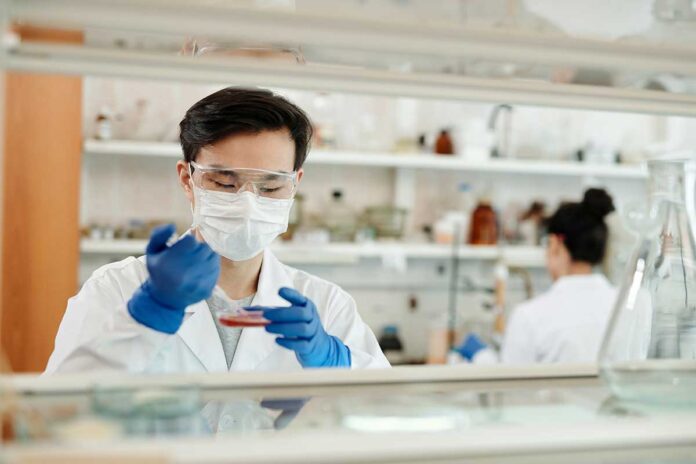 However, limiting antibiotics use could compromise animal production efficiency and health. Thus, there is an urgent need to develop effective alternatives to antibiotic growth promoters (AGPs). Recent microbiota studies in poultry have shown the growth-promoting effect of AGPs was highly correlated with the reduced activity of bile salt hydrolase (BSH), a gut bacterial enzyme that has negative impact on host fat digestion; consistent with this finding, the population of Lactobacillus species, the major intestinal BSH-producer, was significantly reduced in response to AGP use. Therefore, BSH is a key mechanistic microbiome target for developing novel alternatives to AGPs, such as BSH inhibitors for enhanced feed efficiency and growth performance in poultry.

Recently, we have identified a unique BSH enzyme from a chicken L. salivarius strain, developed an efficient high-throughput screening system to discover BSH inhibitors, and performed a series of functional, structural, and broiler studies to test our hypothesis. Our findings have provided compelling evidence that bacterial BSH in the intestine is a promising target for developing alternatives to AGPs.

Use of antibiotics clearly serves as a selective driving force to enrich antimicrobial resistance (AMR) genes and promote the emergence of resistant pathogens. Thus, reducing or eliminating the use of infeed antibiotics in healthy animals has been a worldwide trend to effectively mitigate AMR and protect food safety. In particular, for more than 60 years, poultry industry has manipulated gut microbiota to increase feed efficiency and body weight gain through the routine use of low-dose antibiotics as feed additives, called antibiotic growth promoters (AGPs).

Use of AGPs has been associated with the emergence of antibiotic-resistant human pathogens of animal origins. The European Union has banned AGPs since 2006. US FDA also implemented a new policy to recommend a voluntary withdrawal of medically important antibiotics from routing animal production practices by December 2016. However, AGP bans would have a negative impact on poultry production. Thus, ending the use of AGPs creates challenges for the poultry feed and feed additive industries. Developing effective alternatives to AGPs is urgently needed to maintain current poultry production level without threatening public health.

Although various products, such as prebiotics, probiotics, and organic acids, have been used to alter the intestinal microbiota for enhancing poultry growth performance, very limited data is available to clearly justify the choice of specific bacterial species or products for growth promotion in poultry; not surprisingly, results were inconsistent from independent studies. Examination of microbiota in response to AGP treatment would provide insights into the modes of action of AGPs and facilitate the development of more effective microbiota-based strategies for growth promotion.

With the aid of culture-independent molecular approaches, investigations of the effect of AGPs on intestinal microbiota have been initiated in different food animals, including poultry and swine. These microbiome studies have shed light on the mechanism of mode of action of AGPs and on the development of novel alternatives to AGPs. To examine the response of gut microbiota to AGP treatment in chickens, we simulated environmental conditions used in the poultry industry and obtained the growth-relevant, high-quality fecal samples for microbiota analysis. The fecal samples were subjected to analysis using different culture-independent approaches (phospholipid fatty acid analysis and 16S rDNA clone library analysis).

The AGP treatment influenced the diversity of ileum microbiota in the chickens primarily in the Firmicutes division. In particular, Lactobacillus spp populations in each AGP-treated chicken were significantly lower than those found in the ileum of control chickens, which is consistent with the findings from other independent chicken studies. This study and other published information strongly suggest that certain lactobacilli populations in the intestine, such as L. salivarius, have negative impact on chicken body weight gain, likely mediated through production of bile salt hydrolase (BSH), an intestinal bacteria-produced enzyme that exerts negative impact on host fat digestion and utilization.

The BSH enzyme produced by gut bacteria catalyzes de-conjugation of conjugated bile acids by hydrolyzing the amide bond and producing free amino acids and unconjugated bile acids; this is an essential gateway reaction in the metabolism of bile acids in the small intestine. The bile acids have dual digestive and signaling roles in the host; therefore, it has been recognized that intestinal BSH plays an important role in host lipid metabolism and energy harvest. L. salivarius NRRL B-30514, a strain isolated from chicken intestine, displayed potent BSH ability to hydrolyze conjugated bile salts. A unique and potent BSH gene was identified and characterized from this L. salivarius strain. The identified BSH displayed potent hydrolysis activity towards various conjugated bile salts. Different compounds that are used as dietary supplements in animal feeds were randomly selected for testing their inhibitory effects on the activity of the recombinant BSH using a standard in vitro BSH assay. Several dietary compounds, such as CuCl2, CuSO4, and ZnSO4 displayed potent inhibitory effect on the rBSH. The inhibitory effect of copper and zinc on the rBSH is of particular interest.

Recently, copper and/or zinc have been used at high concentrations (up to 250 ppm for copper and 3.000 ppm for zinc) to aid in feed efficiency and growth promotion in poultry. To date, there is a lack of scientific evidence to explain why copper and zinc function as growth promoters at elevated concentrations. Our BSH study strongly suggest that the elevated concentrations of copper and/or zinc in feed exert inhibitory effect on the activity of intestinal BSH, consequently leading to enhanced lipid metabolism and host energy harvest. This finding strongly supports our hypothesis that BSH inhibitors may serve as promising alternatives to AGPs. Given the potential problems with long-term use of high doses of copper or zinc in animal feed, such as copper/zinc toxicosis and environmental contamination, novel BSH inhibitors with low toxicity and minimal environmental impacts should be identified.

Subsequently, by taking advantage of the unique feature of the L. salivarius BSH enzyme, an efficient high-throughput screening system was successfully developed and used to discover BSH inhibitors. Five compounds, caffeic acid phenethyl este, riboflavin, epicatechin monogallate, gossypetin, and carnosic acid, have been validated for their inhibitory on the L. salivarius BSH and are potential alternatives to AGPs for promoting poultry growth. Unlike many BSH from other bacteria that have narrow substrate spectrum, the L. salivarius BSH displayed potent hydrolysis activity towards both glyco-conjugated and tauro-conjugated bile salts. The broad substrate specificity nature of this BSH makes it an ideal candidate for screening desired BSH inhibitors. This speculation is further supported by our recent study showing the identified BSH inhibitors also exhibiting potent inhibitory effects on a phylogenetically distant BSH from L. acidophilus.

As an initial step towards structure-function analysis of BSH, the C-terminal His-tagged BSH from L. salivarius NRRL B-30514 was crystallized recently. The 1.90 Å crystal structure of the L. salivarius BSH was determined by molecular replacement using the starting model of Clostridium Perfringens BSH. It revealed this BSH as a member of the N-terminal nucleophile hydrolase superfamily. Crystals of apo-BSH belonged to space group P21212, with unit cell parameters of 90.79, 87.35, 86.76 Å (PDB entry 5hke). Two BSH molecules packed perfectly as a dimer in one asymmetric unit. Comparative structural analysis of the L. salivarius BSH also identified potential residues contributing to catalysis and substrate specificity.

Notably, unlike the binding pocket in other BSH that shows an open entrance with shallow bottom, a panel of unique residues in the L. salivarius BSH make this BSH enzyme display narrow entrance of the binding pocket and the increased inner capacity of the binding pocket, which may enable substrate to sit deeply in the pocket with different conformation and lead to the different enzyme-substrate interaction (or broad spectrum of specificity). Future in-depth structural analysis of the lsBSH (e.g. in complex with specific substrate) in conjunction with comprehensive amino acid substitution mutagenesis would help us discover critical residues in catalysis and help us discover novel BSH inhibitors.

In addition to discovering more novel BSH inhibitors, comprehensive animal trials are essential to further evaluate and select desired BSH inhibitors for use as alternatives to AGPs. Recently, the in vivo efficacy of riboflavin, an identified BSH inhibitor was evaluated in a preliminary chicken study. Briefly, 200 one-day-old Hubbard broiler chicks were randomly allotted to 20 floor pens (10 chicks per pen) and assigned into two treatment groups (10 pens per group) that received a basal diet (control) or a basal diet supplemented with riboflavin (20 mg/kg of diet). At 21 days of age, average body weight per bird in riboflavin-treated group (0.4966 kg) is significantly higher (P=0.005) than that in control group (0.4605 kg). The gain/feed ratio per bird in riboflavin-treated group (0.6546) is also significantly higher (P=0.003) than that in control group (0.5925).

Although riboflavin could have multiple modes of action on host physiology, this chicken study supported our hypothesis, and provided strong rationale for us to continue to comprehensively evaluate novel BSH inhibitors as non-antibiotic AGPs in conjunction with intestinal bile profile measurement.