Necrotic Enteritis (NE) occurs in broilers due to an overabundance of C. perfringens and is usually associated with predisposing factors which include coccidial challenge, poorly digested feed, and immune suppression. Coccidiosis is often considered a primary predisposing factor for the onset of NE development in both commercial and research settings.

Coccidiosis effects on mucosal permeability can lead to plasma protein leakage into the intestinal lumen which can increase intestinal pH, decrease gut motility, and increase the potential for a secondary bacterial infection. Eimeria spp. can also increase intestinal mucus production. Though mucus is an essential part of the primary barrier against invading pathogens, overproduction is a source of nutrients for mucolytic bacteria including Clostridium perfringens.

There has been considerable discussion on which toxin(s) produced by C. perfringens is primarily responsible for NE in chickens. The toxin most often associated with NE is the α-toxin, though Keyburn et al. (2006; 2008) questioned the original α-toxin research and published a paper describing “NetB” as a new toxin that should be considered. A review by Rood et al. (2016) suggested that the onset of NE is complex, with multiple contributing factors, and not simply the presence of a specific toxin.

Clostridium perfringens is a commensal bacterium that can exist in the intestine and the environment (litter, soil, water, feces, food, etc.). The life cycle of C. perfringens begins with a spore which will germinate under favorable conditions into a vegetative cell. The vegetative cell replicates and subsequently sporulates. A C. perfringens spore can survive for years and is resistant to heat, cleaning, and disinfectants.

The composition of the spore coating includes components that help facilitate germination and these include Ca and dipicolinic acid. Recent in-vitro research has demonstrated that C. perfringens germination also requires exogenous calcium. This was previously demonstrated with C. difficile, a Clostridium species with implications for human health. The presence of Ca in the intestine (especially at higher levels) can theoretically circumvent the need for endogenous Ca and DPA from the spore coating.

The third life stage, sporulation, results in the formation of an endospore. The induction of sporulation can occur in response to increased C. perfringens density and unfavorable conditions such as lack of nutrients. Though Ca is not needed for sporulation), increased Ca during spore formation can increase the protective capacity of the endospore. Spores with increased Ca and DPA are more resistant to heat and thus harder to kill. Sporulation also responds positively to phosphorus in the intestinal environment as it counteracts the inhibitory effects of glucose and subsequently facilitates sporulation.

Previous research suggests that increased Ca levels in the diet increases the activity of both toxins resulting in increased NE mortality. Our hypothesis is that reducing dietary Ca may decrease mortality related to NE by reducing the availability of Ca needed for multiple life stages of C. perfringens. Both hypotheses require additional research.

Effects of Bacillus DFM’s in broilers with Necrotic Enteritis

A summary of published broiler studies using supplemental Bacillus DFMs with a NE challenge are shown in Table 1. These trials suggest an inconsistent effect of DFM on body weight and gain. Seven trials report no effect of the DFM whereas six show an improvement in gain. In the six with improved gain, three occurred in the phase immediately after challenge while the other three reported an overall improvement at the end of the trial. This inconsistent effect of Bacillus DFM on body weight and gain is similar to research studies in birds that are not challenged. Feed intake was not affected by DFM supplementation in previous challenge studies (Table 1) whereas in studies with no challenge feed intake effects of DFMs are inconsistent, some show no effects, while some demonstrate improvements that may be age or phase dependent.

Eight studies with broilers challenged with NE reported NE lesion severity scores (Table 1). Five reported reduced NE lesions with DFM, and two observed reduced lesions in the duodenum but not in the ileum or jejunum. The one remaining trial reported no effect of DFM on lesions though all lesions were noted as mild. In nine NE challenge studies where mortality data was reported, there was reduced mortality with DFM supplementation in five studies, three reports with no effect and one with a transient effect but no overall effect at the end of the study (Table 1). In summary, dietary DFM inclusion in broilers with NE appears to have a somewhat positive effect on FCR. Bacillus DFMs may reduce NE lesions and mortality though effects on BW and FI should not be expected, though transient effects may occur in broilers affected by NE. 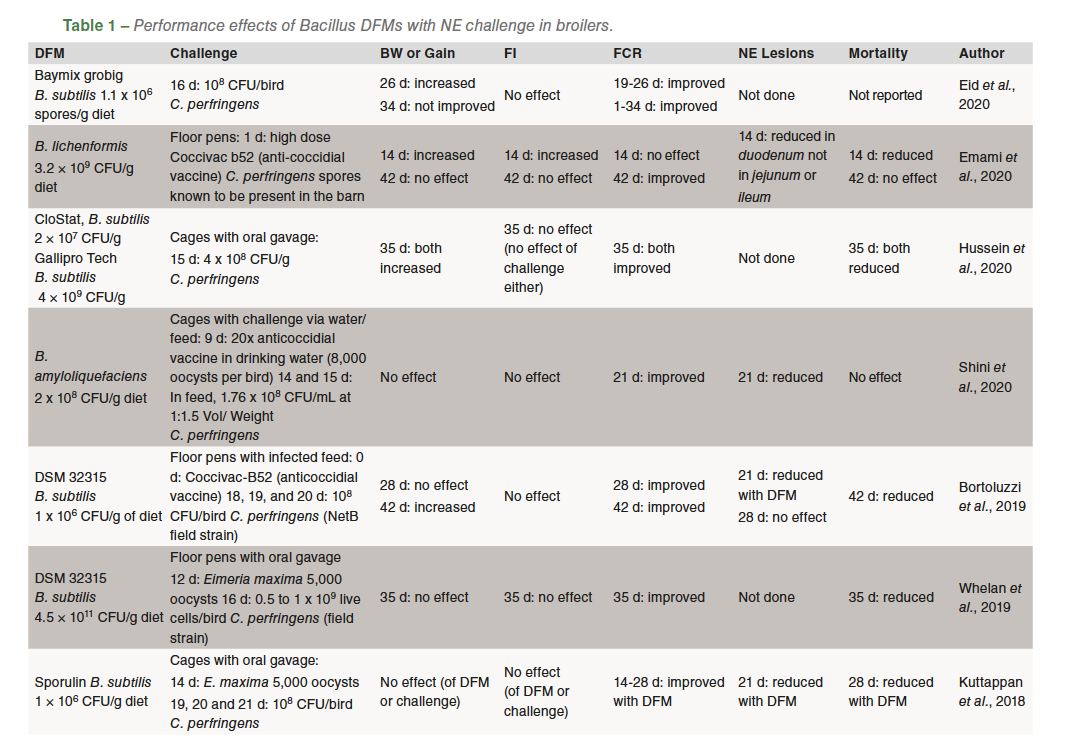 As alluded to previously, there is some research suggesting that a reduction in dietary Ca levels in broilers with NE may reduce mortality. Paiva et al. (2013) reported that mortality was reduced from 20% to 5% in birds fed reduced Ca diets (0.9% vs 0.6%) at 21 days of age when source of Ca was calcified seaweed and dicalcium phosphate. In birds fed Ca from limestone and dicalcium phosphate with similar Ca differences, mortality was reduced from 12% to 7% at 21 days of age. In a second trial mortality was reduced from 20% in birds fed standard Ca diets to 10% in birds fed reduced Ca diets at 35 days of age. The Ca source was calcified seaweed and dicalcium phosphate and standard or low dietary Ca treatments stepped down with age (starter: 0.9% or 0.6%, grower: 0.8% or 0.52%). The NE challenge in the trials by Paiva were from exposure to C. perfringens in the litter (from a previous flock with NE) after live coccidiosis vaccine.

Zanu et al. (2020) compared dietary Ca levels using an induced NE challenge where broilers were given three Eimeria spp. on day 9 followed by a NetB positive strain of C. perfringens orally gavaged on days 14 and 15. Treatments were standard or low dietary Ca that was stepped down with age (starter: 1% or 0.6%, grower: 0.9% or 0.5%, and finisher 0.8% or 0.4%). Mortality at 42 d was reduced from 7% in birds fed standard Ca diets to 3% in those fed low Ca diets. Intestinal lesions were higher in challenged broilers but there was no effect of Ca on lesion scores. Lesion scores were not determined by Paiva et al.

A research trial was completed by Calvert et al. (2015) which included three dietary Ca levels (0.90%, 0.75% and 0.60%; from limestone and dicalcium phosphate) with or without a Bacillus subtills DFM. The NE challenge utilized the same method as Paiva which was exposure to C. perfringens in the litter (from a previous flock with NE) after administering a live coccidiosis vaccine at the recommended dosage. Mortality related to NE at 28 d was reduced from 16% to 6% when dietary Ca level was reduced from 0.90% to 0.60% (P≤0.05).

Ileal Ca digestibility was reduced as dietary Ca increased from 0.60% to 0.90%. Percent tibia ash was not different between 0.6% and 0.75% Ca diets though it was higher in chicks fed 0.75% Ca versus those fed 0.90% Ca at 18 days (P≤0.05). During an NE challenge it appears that chicks may adjust Ca absorption and utilization to prevent signs of deficiency.

Reducing dietary Ca level reduced mortality related to NE and when combined with a Bacillus DFM improved body weight gain. Reducing Ca levels in diets to below industry standards may be one dietary approach to manage the severity of NE though it may not be sufficient to improve performance without the use of other methods as demonstrated in this trial by the inclusion of a DFM with lower Ca diets.