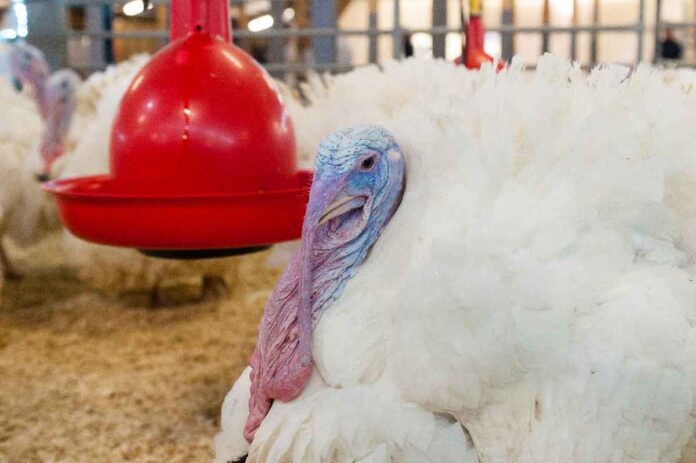 A small-scale evaluation examining the effect of different feed forms was conducted in ATL facilities in the UK. This involved feeding 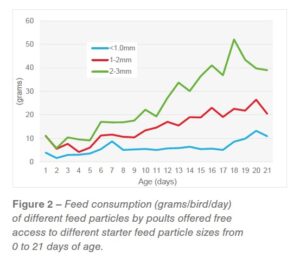 B.U.T. 6 males ‘good’ and ‘poor’ quality crumbs and pellets from 0 to 20 weeks. Diets were prepared according to the ATL recommended nutrient specifications and feeding programme. The starter diet was provided as a sieved crumb for the ‘good’ feed physical quality control and an unsieved crumb for the ‘poor’ feed physical treatment. The ‘poor’ pellet quality treatment was prepared by hammer grinding pellets to a fine consistency (fines) and then blended with intact pellets to result in a 50:50 mix of pellets and fines (see Figure 3). 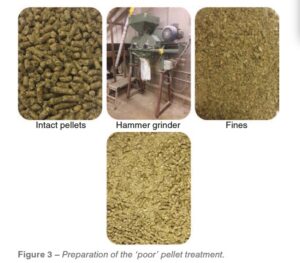 The mix of fines and pellets resulted in a feed physical quality similar to poor feed physical quality which can sometimes be seen in the field (see Figure 4). The results showed there was a significant depression in bodyweights to 20 weeks of age; the poor treatment resulted in a 12.3% reduction in bodyweight loss relative to the control. FCR deteriorated by 36% in the poor treatment relative to the control at 20 weeks of age (see Figure 5). 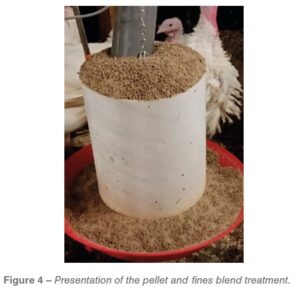 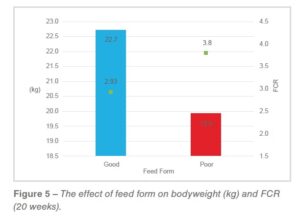 The negative effect of poor feed form on bodyweight was evident through the lifetime of the birds. This effect was detected as early as 3 weeks of age and continued, with increasing effect, to the end of the trial period (see Figure 6). Breast meat yield was assessed at 20 weeks of age, the poor treatment reduced breast meat yield by 8.4% (see Figure 7). This effect on breast meat yield is most likely related to the effect of feed form on physiological development to this age i.e. the birds fed the poor feed form were physiologically less developed at 20 weeks of age compared to the birds fed the control, hence breast meat was not as well developed. The effect of feed form on performance was much greater than previously observed; in particular the magnitude of effect on FCR was unexpected. The data suggests that those birds fed the poor feed form ate significantly more feed than birds fed the control diet but did not convert this feed to liveweight. Feed wastage is often evident when birds are fed poor quality pellets. While feed wastage was evident in some pens, this was superficial and not enough to account for the degree of difference in FCR. Another possible explanation for the degree of effect on FCR may be related to the preparation of the ‘poor’ feed treatment. The degree of fine material within the poor feed treatment was very significant and also the extent of pulverisation during the feed grinding process may have resulted in a more extreme ‘poor’ feed form than assessed in some other trials which compared pellets to mash diets. Nonetheless, the poor treatment was representative of poor feed form in the field and the results reinforce the importance of ensuring feed physical quality is optimal and is adequately assessed within the organisation. 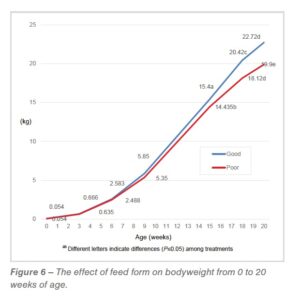 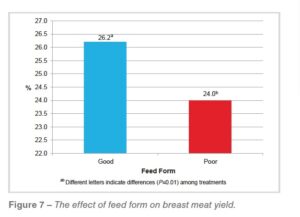 Further evaluations assessed the impact of feed form on enteric condition; birds fed poor feed physical quality from day old to 12 weeks of age had poorer enteric condition (see Figure 8) and also experienced increased incidence of gut leakage relative to those fed good quality crumbs and intact pellets. This effect was also detected in much older birds; 18-week-old birds fed with a poor feed physical quality feed for a shorter period of time (one and a half weeks) also had poorer enteric condition relative to those fed intact pellets. These results demonstrate the impact of feed physical quality is relevant at an enteric level and not just from a farm or processing point of view. Assessment of feed physical quality is usually measured by a sieving assessment of crumbs and a pellet durability index (PDI). The target particle size profile for starter diets in a crumb form are as follows in Table 2. Pelleted products must contain a minimised quantity of fines particles (<1mm), aiming for less than 10% fines (farm sample assessment) with the remainder as intact pellets.

Pellet durability assessments are normally made at the mill laboratory via specialised devices such as a Holmen Tester or Tumbling Tester (see Figure 9), a durability of >90% is realistic for most pelleted feeds. 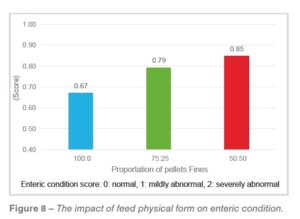 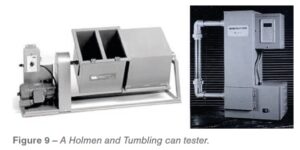 These assessments involve placing a sample of feed through an aggressive process which is aimed at replicating the physical insults to the pellet in the field. This assessment allows the mill to know whether manufactured feeds meet physical quality standards. Assessment of feed physical quality should not just be conducted at the mill, farm assessments give a good indication as to what is provided to the bird especially if the sample is taken directly from the feed pan. This can be conducted via the use of a hand sieving device (see Figure ten); the procedure is straightforward and practical for most farms to conduct. For more information on the use of the hand sieve, please contact turkeysltd@aviagen.com.