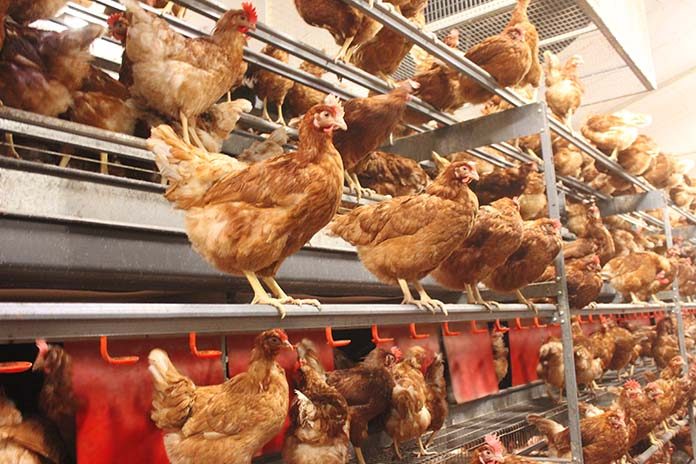 Red mites are parasites that are found on average 83% of the European poultry farms. They weaken the laying hens, which can lead to reduced technical results and financial losses. Dutch poultry farmer Pieter van Lierop has good experiences with the Q-Perch from Vencomatic, a perch with a built-in wire, safe for chickens, that electrocuting the red mites.

The contamination of red mites in laying hen farms is almost unavoidable. The problem gets bigger since less and less pesticides are allowed and production cycles become longer. The Dutch specialist in poultry housing systems, the Vencomatic Group, developed the Q-Perch, a mechanical solution that combats red mites on the basis of their natural life cycle. In fact, it deprives the red mites of food and prevents it from multiplying. The patented Q-Perch is a perch with two barriers at the bottom that kill red mites on their way to the chickens. The barrier has a low-power voltage, which the chickens cannot come into contact with, but which is deadly for red mites. “Since red mites cannot reproduce without food, the population will not increase, so this solution makes the use of pesticides redundant“, says Lonneke Lepelaars, Regional Manager Marketing at Vencomatic Group. “Traditional control methods are reactive. The Q-Perch offers continuous line of defense, preventing negative effects of red mites“.

Optimum comfort
“The mushroom shape of the Q-Perch is the most comfortable shape for chickens, because it offers them stability and grip“, continues Lonneke. “That is why the Q-Perch is beneficial for animal health and animal welfare, and the poultry farmer can benefit from it since the birds perform better“. But is it true? A test at the layer farmer Pieter van Lierop was made, a company in the south of the Netherlands, Asten-Heusden (in province Noord-Brabant) with 165,000 Lohmann Brown Classics laying hens spread over 5 poultry houses. He has been using the Q-Perch from November 2014 onwards.

A conscious choice for laying hens
Malou (51) and Pieter (53) van Lierop took over the company with dairy cows and meat pigs from Pieter’s father in 1987. In 1993, 5,500 broiler breeders were added. Malou already was familiar with broiler breeders because of her parental farm. Six years later they switched over to laying hens. “We possessed land to keep 7000 Freiland chickens and we immediately made expansion plans“, Pieter says. Then they successively disposed of the broiler breeders, meat pigs and dairy cows. It was not until 2004 before the permit for an additional poultry house was granted. The couple has 4 children: Annelou (24), Joris (23), Sander (20) and Remko (18). “In the morning Malou and I collect the eggs. In the afternoon I carry out checks with my employees and I am working on management, while Malou takes care of the bookkeeping and our family“, Pieter outlines the division of tasks at the company. The couple is getting assistance from 3 employees. “29,000 of our 165,000 laying hens, have a free range (Freiland hens) with a winter garden on both sides of the barn, with over 15 ha of grassland. Every night we drive the birds back into the house by means of a quad. The other birds are free-range chickens. Our birds feel at home in the Bolegg Terrace aviary system with longitudinal ventilation. Our company has a total of seven Agro Supply heat exchangers, which provide the minimum ventilation of approximately 1 m³ / animal / hour, and are taking care of manure drying so that no intermediate storage is required. We have pitless Hercules manure belts from Vencomatic. This works very well and is very easy to clean. Scrapers remove the litter and we clean the manure belts twice a week“.

The new house, built in 2014 for 95,000 chickens, can be reached via a walkway. The range for the Freiland hens is located between, in front of, and on the side of the houses. The packer from Prinzen, packs 850,000 to 1 million eggs per week, which are sold at Kwetters Eggs company. Hotraco egg counters regulate the speed of the conveyor belt for optimal use of the packers.

Pilot farm for electrical mites control
The red mite problem was manageable on the company. “In my opinion, it’s a recognized problem and control is very important. In one house we had traditional manure belts with lots of spiders, who ate red mites”, laughs Pieter. “In another house we sprayed green soap and methylated spirit twice a year with a high-pressure spraying pistol. But since those products are not IKB-accredited, we no longer use them. The cleaning and disinfecting of the farm is done by a poultry service company. I am pointing the employees of that company to the spots in strategic places, such as cracks and crevices, which have to be cleaned thoroughly”. On the initiative of Vencomatic, van Lierop in the Netherlands was one of the three pilot companies in 2011 approved by the German KAT quality scheme for electric red mite control. “I think the Q-Perch is a wonderful system“, Pieter says. “We haven’t got much work with it. Because of the shape of the perch, it’s easy for birds to remain sitting on it. The Q-Perch is turned on every day, from 13:00 to 18:00 hrs. Every month, except for the bird flu period, the red mites were trapped in a plastic tube with rolled cardboard in it, and counted by Vencomatic via a monitoring. Those traps were placed by the same person, in various strategic places. It was striking that we have a bit more trouble with red mites in winter than in summer, while usually it is just the opposite“.

Good manageability
Under the mushroom-like perch, electrical wires have been mounted for electrical red mite control. When the mites touch these electrical wires they are immediately electrocuted by the low current, which is harmless to the birds. “In this way, red mites are not given a chance to feed themselves through the animals, so the use of pesticides is not needed anymore. This increases the manageability of the problem. Fortunately, we have not found any red mites in the barn until now. I can recommend the system to my fellow poultry farmers, especially in new investments. The Q-Perch system can also be mounted in other, non-Vencomatic systems. The depreciation amounts to about 15 eurocents per year per bird”.