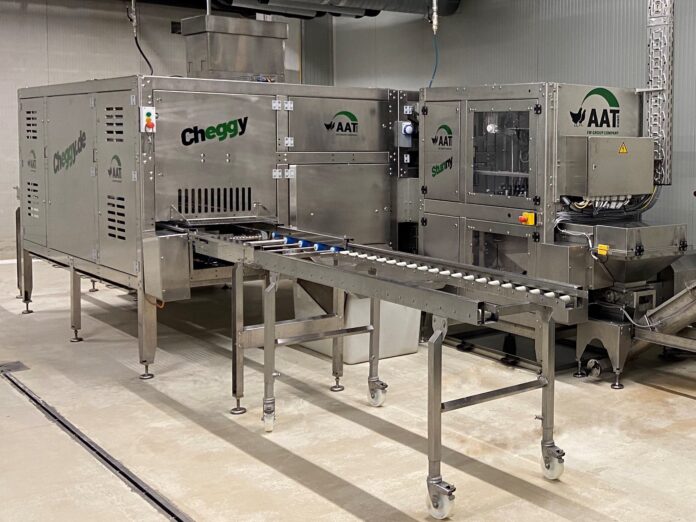 Germany has as first European country stopped by law culling of male day-old chicks from 1st January 2022 onwards. In February 2022, the French Ministry of Agriculture issued a decree that will ban the killing of male day-old chicks with effect from 2023. As third, the Italian parliament voted and approved the amendment to end the killing of day-old male chicks in the layer industry by the end of 2026.

To avoid the long-standing practice, in ovo sex determination is the most important alternative, besides rearing of the male chicks and breeding dual-purpose lines. For almost 20 years several approaches to determine an embryo’s gender are objects of research. The spectrum ranges from gene editing and influencing the sex ratio to various analytical methods of the allantoic fluid (hormone or DNA analysis) and optical methods (spectroscopy). To be applied commercially an in ovo sex determination technique must be accurate and secure, but also robust, cost-effective, and fast enough to meet the requirements of modern hatcheries (Kaleta and Redmann, 2008). One currently market-ready method for in ovo sex determination is hyperspectral imaging as described by Göhler et al. (2017). Based on the sexual dimorphism in plumage color in brown egg strains, this technique detects differences between brown female and yellow-white male chicks non-invasively through the intact eggshell with high accuracy on day 13 of incubation. A fully automated system with high throughput of hatching eggs (“CHEGGY”) was developed and installed in several commercial hatcheries, as announced in Zootecnica International 11/2020. Sexing and hatchability results are collected regularly in a database and were used in this study for a largescale field survey of the applicability and accuracy of the system in commercial hatcheries to optimize operation and find impact factors on its success. 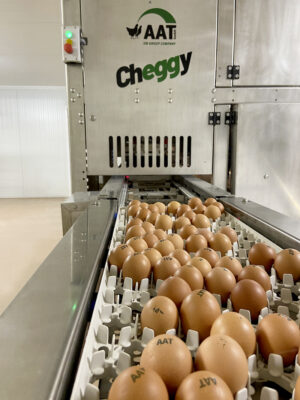 Hyperspectral imaging was used to detect the embryo’s gender at day 13 of incubation. This technique captures three-dimensional pictures by measuring radiation intensity simultaneously at each pixel of a sample: two dimensions are representing spatial information and one dimension represents spectral information of the whole spectrum (Bellon-Maurel and Gorretta, 2014). Based on the sex-linked gold/silver factor used in brown-laying genetics, males have silver/white and females a gold/brown plumage (Malone and Smyth, 1979; Smyth, 1990; Damme and Hildebrand, 2002).

Once the first feathers are pronounced, embryonic color sexing using hyperspectral imaging can be performed (Göhler et al., 2017). Inside a closed measuring chamber, a defined number of hatching eggs is illuminated from below with halogen lights, while a hyperspectral camera captures the image of the eggs. Using a specified algorithm that is based on a parametric model, the computer automatically detects clear eggs (unfertilized and early dead) as well as the sex of embryos inside. Eggs with female embryos are placed back to the setter trays and are incubated until hatch, whereas clear eggs and eggs with male embryos are sorted out. To ensure that the male embryos do not perceive pain during termination of the development, AAT has developed a new innovative stunning method for embryos in the second third of the incubation. In the “STUNNY” unit, two electrodes on the pole sides penetrate the hatching eggs and the embryo is anesthetized by electrical current (Zumbrink et al., 2020; von Wenzlawowicz, 2021). This is followed by utilization as a high-quality protein source in pet and livestock feed.

Database of the present study

In this study, which was presented at the 14th Poultry Research Days in Tours, France, data of 49 hatches of one commercial hatchery in Brittany, including five different breeds and 22 breeder flocks between 24 and 67 weeks of age were evaluated. In total, 1.61 Mio eggs were sexed, where egg age ranges between 3 and 20 days and embryo age at sexing between 325 and 334 hours of incubation.

Number of eggs set, hatched females and males per hatch were used to calculate the variables of interest:

As possible influencing factors on sexing accuracy, the independent variables “breed” and “age of breeder flock”, “average egg age at setting” (storage days), “embryo age at sexing” (hours of incubation), and “% rejected eggs” (=clear eggs as detected by CHEGGY) were evaluated using descriptive statistics. Location parameters, measures of variation of and correlations between variables were calculated with Stata and Excel statistic package. Regression analysis plots are used to visualize influencing factors on the accuracy of the hyperspectral sexing technique. Level of significance was set at p<0.05.

Table 1 shows the number of hatches and eggs per breed as well as the average of sexing accuracy (% sexing error) and hatchability (% total hatch of all eggs set) within breed. Since % female hatch is influenced by % sexing error (with higher sexing error % female hatch decreases, relatively; this does not mean that hens are lost, absolutely), % total hatch of eggs set is more suitable to judge hatchability and possible technical loss. Hatchability of the eggs after handling is high (91.4%-95.4%), which indicates a very low technical loss of the sexing technique and handling of the eggs. The average sexing error ranges between 3.5% and 4.4%, showing a good applicability in different brown breeds.

Biological and technical factors like breed or age of flock were assumed to be the main contributors to the success of in ovo sex determination. As data are taken from a commercial hatchery, the number of entries per breed is unbalanced and the vast majority of data related to two breeds only. Differences in sexing errors between breeds are not significant, indicating that the technique of Hyperspectral Imaging is applicable in different brown egg strains (Table 2). 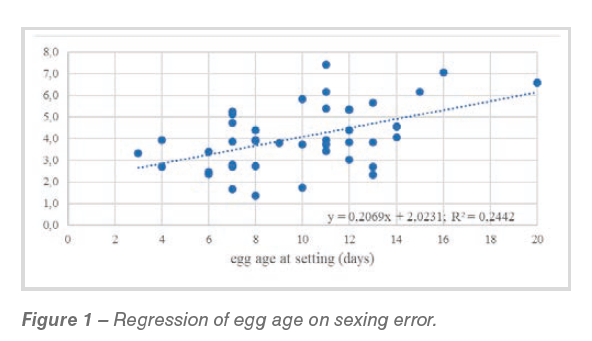 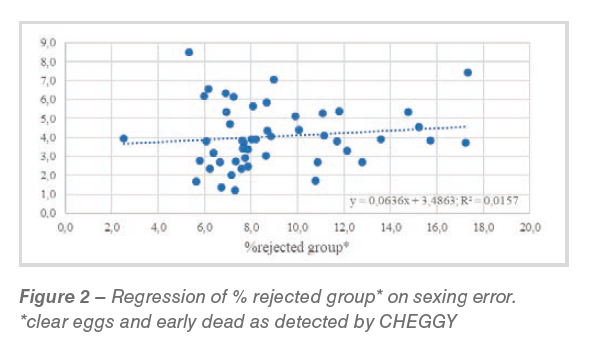 The positive correlation between % rejected eggs and % sexing error (r=0.24) is not a biological, but a technical factor: a higher number of clear eggs or eggs with early mortality influences the light intensity in the measurement chamber, which is causing more errors due to saturation (Figure 2).

Breeder flocks of an age between 25 and (at least) 67 weeks can be sexed by Hyperspectral Imaging with consistent low levels of males (sexing errors). An embryo age of 324 and 335 hours is optimal for sexing. The impact of deviation would need further studies including a wider range of incubation hours as well as older breeder flocks.

Comparison of the results in this study with data of other in ovo sexing techniques is not possible, since up to now no such surveys are published or available.

In summary, Hyperspectral Imaging is an important methodology to avoid the killing of day-old males in an animal welfare and environmentally friendly manner. After more than 12 months experience with the fully automated, high throughput system, assured statements and recommendations can be made for commercial hatcheries to achieve best results. With optimum conditions, a sexing accuracy of 98.8% can be achieved (average sexing error rate 4.1%). Average female hatchability of eggs set was 38.0%, compared to 41.9% expected. Due to this small detrimental effect of the sexing technique on female output, only a small additional demand of hatching eggs is necessary (8% more hatching eggs).

The procedure is non-invasive, keeping the eggshell intact. Based on differences in the measured light spectra, an algorithm classifies the gender. In addition to sex determination, unfertilized eggs are also identified and sorted out at the same time. The hyperspectral measurement technology does not require expensive consumables, which makes this technique significant less expensive than other methods and, most importantly, is more environmentally friendly. Combined with a high throughput of 20.000 eggs/hour compared to 3.000-4.000 eggs/hour in other techniques, CHEGGY is highly sustainable and efficient solution in the market to avoid chick culling. Additionally, the STUNNY unit enables hatcheries to integrate the stunning of embryos in the egg in compliance with animal welfare during the second-third of incubation. The fully automated technique is based on a newly researched method and offers high throughput rates with maximum effectiveness simultaneously. Currently, the CHEGGY and STUNNY systems are already in use in Germany, France, Italy, Belgium, Austria and Spain.

Von Wenzlawowicz, M., 2021. Investigation report on the effectiveness of a system for stunning male embryos within the egg. Available at: https://www.agri-at.com/images/flyer/Investigation_Report_BSI_Stunning_Chicken_Embryos.pdf