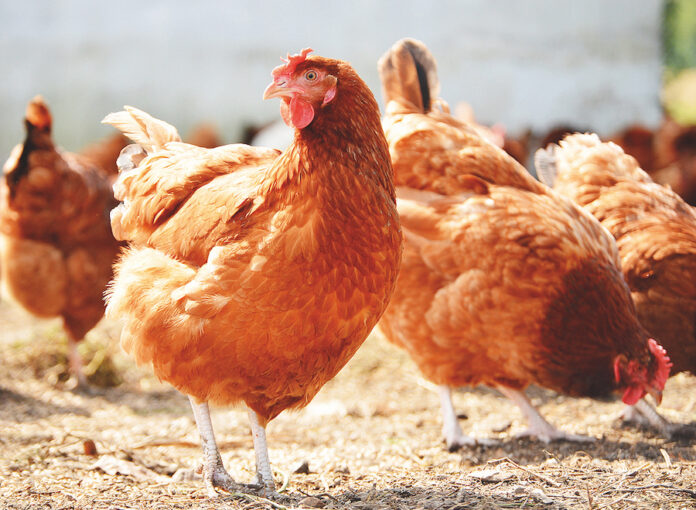 Following the Paris climate agreement (COP21), countries and agricultural supply chain companies are setting targets towards net zero greenhouse gas (GHG) emissions by 2050. In response, there is now significant interest from agricultural producers exploring options to achieve carbon neutral production. This analysis extracted data from the Australian National Greenhouse Gas Inventory to develop a typical profile of GHG emissions from either a broiler or layer enterprise.

The largest on-farm GHG emissions source from poultry production is methane and nitrous oxide from the manure management system, with energy consumption the largest off-farm emission. However, pre-farm embedded emissions from the production of feed may be of similar magnitude to the on-farm emissions. Obvious mitigation options towards carbon neutrality would therefore focus on using existing technology to generate green energy, through increasing methane production from the manure management system, plus reducing ammonia emissions at the same time, and either selling this green energy or displacing electricity from the national grid. Other mitigation options will include balancing the crude protein to energy intake of the birds, further reducing ammonia emissions from manure as an indirect nitrous oxide source. Reducing emissions from feed production may increasingly require sourcing feed from low emissions cropping farms. This analysis shows where the major emission sources are from poultry production and presents options to achieve carbon neutral outcomes using existing technologies. How profitable these are on farm may depend either on a carbon offset incentive mechanism, but more likely to ensure compliance with future market access requirements.

The Paris climate agreement (COP21) is a legally binding international treaty, adopted by 196 parties and entered into force in November 2016 (United Nations, 2015). Article 2A of the agreement set the goal of limiting global warming to well below 2 °C, with an aspirational goal of pursuing efforts to limit temperature increases to 1.5 °C, below preindustrial levels. More importantly, the Paris Climate Agreement also set the goal of peaking greenhouse gas (GHG) emissions as soon as possible, but Article 4 set the aim of achieving “a balance between anthropogenic emissions by sources and removals by sinks of GHGs in the second half of this century”, thereby effectively establishing the target of net zero GHG emissions by 2050. Of the 160 nationally determined contributions submitted prior to COP21, 80% of these included mitigation targets for the land sector including agriculture.

In response to the Paris climate agreement, most multinational agricultural supply chain companies have set their own targets consistent with this agreement, thereby signalling a trajectory for agricultural producers towards low emissions or carbon neutral production. With a recent analysis by Oxfam (2016) reporting that of the 100 largest economies in the world, 69 of these are companies not countries, it is more important for the farming sector to take note of these targets set by their supply chains, than government targets. In addition, over 50% of the agricultural debt market in Australia is managed by National Australia Bank and Rabobank, both have set the target of net zero financed emissions by 2050. Another development potentially significant for the agricultural industries is proposed carbon border adjustment tariffs, that will be applied to countries deemed to have insufficient ambition in climate change taxes and policy. These statements have been made by USA president Joe Biden, saying “failure to curb emissions means America will tax your exports” and “to ensure climate policies do not place U.S. workers and companies at an unfair disadvantage”. The European Union has also introduced a Carbon Border Adjustment Mechanism, with the European Parliament to start taxing imports from countries without a carbon price by 2023. As approximately 70% of Australian agricultural product is exported, plus Australia ranking extremely low on the recent Climate Change Performance Index (CCPI 2021), this indicates that our agricultural sector will need to demonstrate low carbon production in order to avoid border adjustment tariffs on our exports. This would indicate that the agricultural sector will be paying some form of carbon price, and that it would be seem more judicious that these funds are spent within the country to better position our industries, then simply paid out as a tax to our target export markets.

The main GHG emissions from agriculture would be, firstly, methane largely from enteric fermentation in ruminants and methane resulting from manure management. The second GHG of concern would be nitrous oxide, from all forms of nitrogen in agricultural soils, but also nitrous oxide resulting from manure management systems. Agriculture is also a source of carbon dioxide emissions, mainly from the use of lime, urea fertiliser and the purchasing of fossil fuel energy in the form of electricity and fuels. Obviously, emissions profiles differ between agricultural systems, with grain cropping systems mainly emitting nitrous oxide from fertiliser use and from crop residues. Ruminant production systems produce most of their emissions from enteric fermentation, with dairy farms also producing nitrous oxide from higher protein diets and nitrogen fertiliser use. In contrast, monogastric livestock systems produce most of their on-farm emissions from either methane or nitrous oxide as a result of manure management.

While mechanistic models exist that can dynamically model the emissions of various agricultural production systems, the currently accepted accounting for GHG emissions in Australia would need to align with the IPCC-approved Australian National Greenhouse Gas Inventory method, but placed within the Climate Active (2019) framework (previously the National Carbon Offset Standard), based on the following emission categories:

To develop a farm carbon account requires the above scope 1, 2 and 3 emissions to be accounted in a pre-farm to farm gate lifecycle analysis framework, calculated on an annual timestep. There are currently a number of emerging mechanisms to achieve carbon neutral accreditation, either through Climate Active itself, or through third party accreditors using the same accounting approaches; although a formal audit published in a peer reviewed paper has also proven acceptable by the supply chains as sufficient evidence of integrity in the audit.

As there are no GHG emission calculators in the required Climate Active format, specific to the poultry industry in Australia, for this analysis data were extracted from the Australian National Greenhouse Gas Inventory to develop a typical profile

of GHG emissions from either a broiler or grower enterprise (Figure 1). Electricity and fuel emissions (cf. Energy in Figure 1) were sourced from Wiedeman et al. (2015). The GHG emissions profile data presented in Figure 1 would therefore not be specific to a particular farm, but more a general indication of where the emissions are sourced from in the industry and therefore where further research and mitigation attention should be focused. 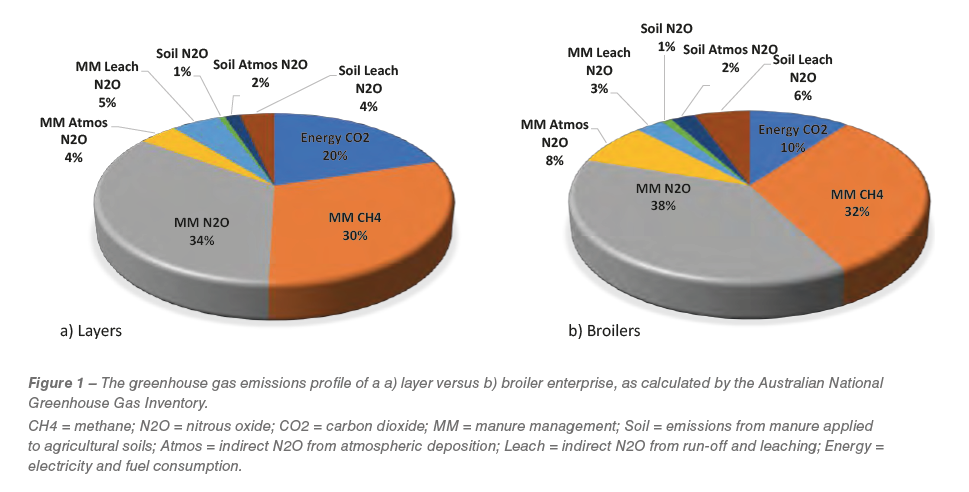 Obvious mitigation options towards carbon neutrality would therefore focus on eliminating the direct emissions from manure management, energy and pre-farm emissions from purchased feed. Technology to minimise methane from manure management system is well established, through covering the manure, thereby generating more methane than the baseline case as a result of the more anaerobic conditions induced. This methane can either be simply flared, returning it from methane, at 28 times global warming potential, back to carbon dioxide. However, a more useful deployment of this energy would be heating and generation of electricity, displacing electricity consumed from the national grid and selling the excess back into the grid as green energy. Covering the manure would also reduce the indirect nitrous oxide, through the atmospheric deposition of ammonia, no longer lost from the manure management system. This would result in a more nitrogen-enriched nutrient solution post-digestion of the manure, with increasing options to sell this as a more natural source of low-emissions nitrogen into other agricultural applications, now wanting to avoid the high embedded emissions from using urea fertiliser. Other mitigation options will include balancing the crude protein intake of the birds, further reducing ammonia emissions from their manure as an indirect nitrous oxide source. Although the pre-farm feed production emissions were significant, unless the poultry production system managed these cropping farms, the only mitigation options would be to source carbon neutral supply from the cropping farms. This pressure to source low emissions pre-farm products is likely to increase across all sectors of agriculture, as farmers become aware of their embedded emissions and potential choice of suppliers.

This analysis shows where the major emission sources are in a poultry production system and presents options for the industry to achieve carbon neutral outcomes using existing and established technologies. How profitable these are on farm may depend either on a carbon offset incentive mechanism, not currently available in Australia for poultry, but more likely, to ensure compliance with future market access requirements.

From the Proceedings of the APSS 2022