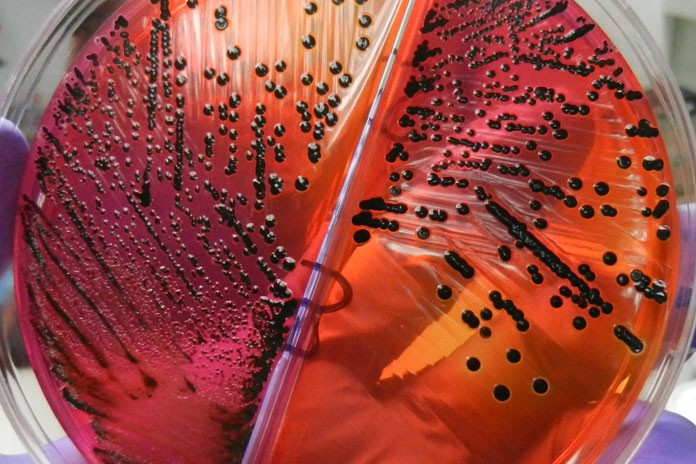 Poultry are sampled often for Salmonella during growout on the farm and throughout the processing plant. While on farm sampling is not currently a regulatory requirement it can be useful in determining Salmonella status of each flock.
On farm sampling can include varying types of both environmental and individual bird sampling techniques, and most of the composite samples exhibit a greater sensitivity in the detection of Salmonella.

Individual bird sampling
In addition to environmental samples, flock status can also be determined thorough individual bird sampling. These types of samples can either be non-destructive or destructive, and include cloacal swabs, individual bird feces, and intestinal ceca. In studies utilizing non-destructive methods of cloacal swabs and fecal samples, it was demonstrated that fecal samples were much more sensitive for the detection of Salmonella than cloacal swabs. When using a destructive sampling approach, sampling of the ceca (vs. other intestinal segments or organs) resulted in the most positive samples.
Sampling in a turkey production facility comparing ceca (destructive method) and environmental swab samples (non-destructive) demonstrated that sampling ceca was three times more sensitive than environmental swabs. When sampling individual birds, ceca or fecal samples are the most sensitive in the detection of Salmonella because the higher resident levels of Salmonella than on the cloaca epithelial surface.

Sampling time
In addition to what samples are taken, when the samples are taken can also influence the ability to detect Salmonella. During broiler growout (low Salmonella challenge) for both ISODS and ceca sampling methods, Salmonella can be detected at the highest frequency at about 3 weeks of age, after which detection steadily declines from 3 to 6 weeks of age. A similar trend is seen in turkeys where the greatest number of samples was positive for Salmonella during rearing at 14 days of age. The frequency of positive samples decreased after 14 days through 20 weeks.
Feed withdrawal can also influence the ability to detect Salmonella. When broilers are subjected to feed withdrawal, the crop empties within 6 hours and the pH within the crop increases to near neutral leading to the growth of enteropathogens such as Salmonella when present.
In addition to feed withdrawal prior to processing, restriction feeding of breeders may also impact Salmonella proliferation and persistence. In a study comparing every-day and skip-a- day feeding programs with broiler breeder pullets, pullets that were fed every day had a lower prevalence and shorter persistence of Salmonella than pullets that were fed with a skip-a-day program. Emptying of the crop every other day, allowing for an increase in crop pH and litter picking may contribute to a higher prevalence and persistence of Salmonella positive ceca.

Salmonella sampling in slaughter plants
During turkey and broiler processing the prevalence of Salmonella on carcasses changes between each step of the process. The levels of Enterobacteriaceae, of which Salmonella is a member, start high on the feathers and skin when the birds arrive at the processing plant. Levels are decreased during scalding but increase during defeathering. After defeathering, process controls including mechanical and chemical interventions continue to decrease levels of bacteria on the surface of the carcasses.
The Food Safety and Inspection Service samples for Salmonella in plant post-chill for FSIS regulated products such as whole broiler and turkey carcasses, chicken parts, and not ready-to-eat ground or comminuted products. The previous sampling set approach has been replaced with a moving window approach in which plant process control is assessed by a moving 52-week period.
Multiple sampling methods including rinse, excision (skin or muscle), swab, neck skin, and whole carcass enrichment have been evaluated for the detection of Salmonella on carcasses. When sampling turkey carcasses, methods that required sampling of a larger surface area of the carcasses (whole carcass swabbing and whole carcass rinse) were more sensitive in the detection of Salmonella than one or two site swab sampling. When neck skin and whole carcass enrichment Salmonella sampling methods following air chilling were compared in broilers, both methods were found to be equivalent. However, following immersion chilling, whole carcass enrichment was the most sensitive method, neck skin less sensitive, and whole carcass rinse the least sensitive.
Although sampling methods vary in sensitivity, each method has a minimal level of detection. The most sensitive method (whole carcass enrichment) requires approximately 8-10 cells being present on the carcass to yield a positive result following 24 hours enrichment incubation. Therefore, any product sampled can never really be declared “Salmonella-Free”. Sampling for Salmonella in processing plants is essential for evaluating process control for the minimization of contamination. Use of the phrase “Zero Tolerance” may lead consumers to believe that there is no Salmonella on raw product and may give a false sense of security.
References are available on request