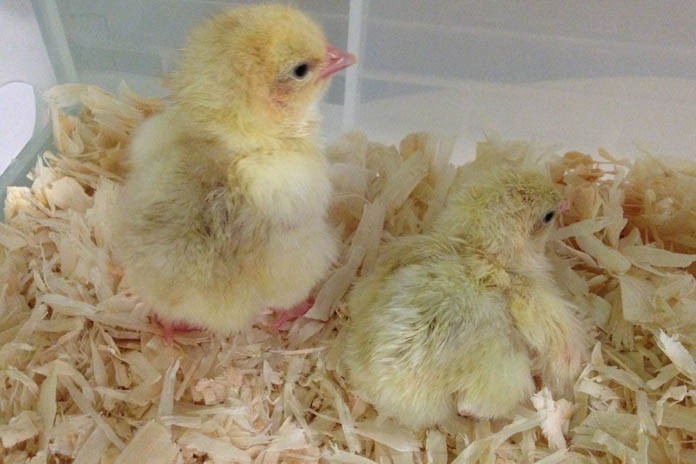 The effect on broiler muscle development and occurence of intramuscular fat.
Neonatal nutrition and immediate post hatch nutritional restriction represent an important facet of broiler production, which can effect muscle growth and development through to harvest.
A critical component of muscle development during this period are the myogenic stem cells, called satellite cells (SC). Satellite cells are maximally active in the first week posthatch during which time they fuse with muscle fibres to facilitate increased muscle protein synthesis. During this critical period SC activity can be impaired by feed restriction which has been shown to affect muscle growth. Additionally, as SC are stem cells they can, when stimulated by nutritional manipulation, transdifferentiate to an adipogenic lineage to form fat cells.

In vitro studies have shown that SC are responsive to an increasing severity of nutritional restriction, observed as reduced myogenic activity and elevated levels of adipogenic gene expression and lipid accumulation.
To investigate if these in vitro observations are representative of SC activity in growing broiler chickens, four diets with increasing restriction of digestible methionine (dMet) were fed to broilers in the first week post-hatch, coinciding with the period of maximal SC activity. Four hundred male Ross-308 broiler chicks were obtained on the day of hatch. They were divided equally among four treatments with five replicate pens and 20 birds per pen. Four corn- soy based starter diets with titrated levels of dMet were formulated.

The control diet contained 0.53% dMet, and three treatments had 120%, 80%, and 60% of the dMet adequate control diet. The treatment diets were fed for the first 7 d, after which all birds were fed the adequate dMet starter until 14 d. Birds then changed to a grower (15-28 d), and finisher (29-42) diet. Ten birds from each treatment were sacrificed at 0, 1, 4, and 7 d and weekly thereafter. Samples of breast muscle were collected and fixed in 10% neutral buffered formalin for microscopic evaluation of muscle fibre and fat cell width, perimysial spacing, muscle morphology and presence of intramuscular fat.
The four inclusion rates of dMet in the starter diet from 0-7 d had no effect on body weight, breast weight or feed conversion ratio throughout the study. No significant difference in muscle fibre width, fat cell width, perimysial fibre bundle spacing, objective scoring of the muscle morphology nor the presence of intramuscular fat were observed between treatments.

This indicates that there was no significant effect of the dMet treatments on SC activity during the posthatch period, although gene expression analysis is ongoing to confirm this conclusion. Although Powell et al. (2013) observed a significant effect of the restriction of Met and Cys on SC activity in vitro, this was only observed when the inclusion level of Met and Cys was reduced to 25% or less of the control. These results indicate that SC can function satisfactorily under a degree of Met restriction, with no significant effect on muscle development or intramuscular fat accumulation.
From Australian Poultry Science Symposium