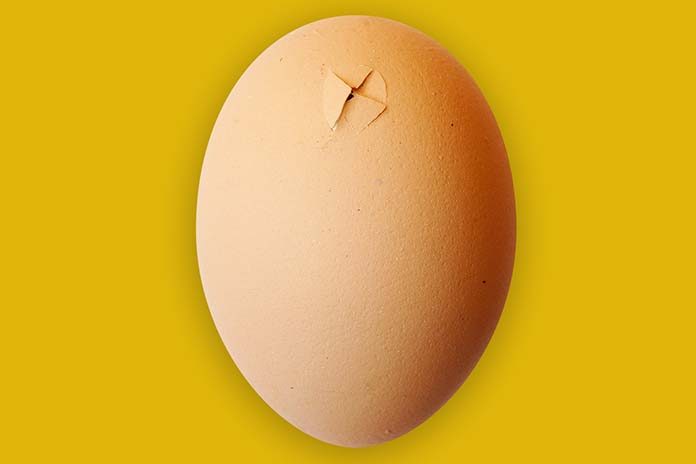 It is important to pay attention to the orientation of the eggs when placing them on setter trays as this has quite an impact on hatch results, both in terms of hatchability and chick quality. Air cell up is the way to go!

The embryo lies on the surface of the yolk and is connected to the latebra (‘white yolk’), which is located in the centre of the yolk. The water-rich latebra has a lower specific gravity than the lipid-rich yolk and according to the laws of physics, the embryo will always move to the top of the egg … no matter which way the egg is placed on the setter tray.

By about day 14 the developing embryo lies on top of the yolk sac. It then turns so it lies lengthwise in the egg and by day 18 the embryo’s head is under the right wing with the beak pointing upwards, ready to pierce the air cell (internal pipping) and inflate the lungs prior to finally emerging from the egg. But what if the air cell is out of reach of the embryo?

The air cell is situated at the blunt end between the shell membrane and the egg membrane. The egg shell is more porous at this end and therefore air will enter here as the egg contents shrink due to cooling down after laying. During storage and incubation, the air cell gradually increases in size as water evaporates from the egg contents.

When eggs are set accidentally sharp-end-up, the head of the embryo is at the opposite end from the air cell and internal pipping is impossible. It is very difficult for the embryo to hatch in this position because it is fully dependent on the limited oxygen supply through the chorioallantoic membrane, and because the shell is stronger at the sharp end and there is less space for pipping and moving around. Unsuccessful embryos can be recognised during break-out of hatch residue by their legs being near the air cell; however not all eggs that are incubated sharp-end-up fail to hatch. A customer in Turkey carried out an experiment in 2016 using different breeds and flock ages. 300 eggs were set sharp-end-up and 300 eggs in the normal position. This resulted in 12.7–21.0% lower hatch of fertile, mostly due to a difference in late mortality (see figure). Moreover, among the eggs that had been incubated sharp-end-up there were more culled chicks. When sharp-end-up incubation is combined with in-ovo vaccination, the results are even more dramatic. A small-scale experiment conducted by a customer in Hungary in 2019 with 162 eggs per treatment resulted in 93 saleable chicks from sharp-end-up incubated eggs. When eggs in this position were also in-ovo vaccinated, only 39 saleable chicks were obtained. The control group (sharp-end-down and in-ovo vaccination) showed normal hatch results.