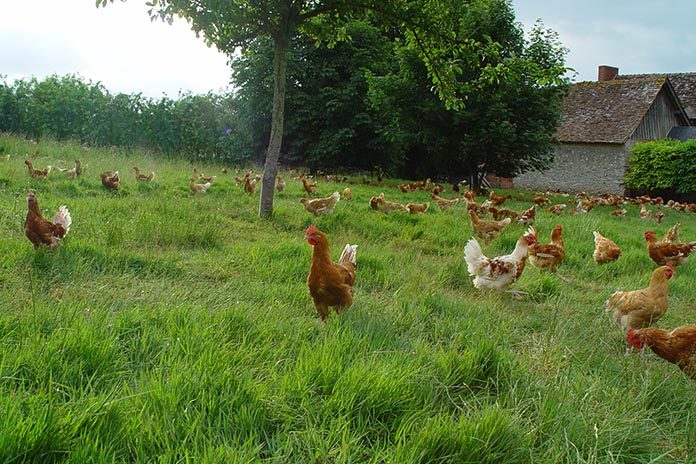 Poultry is the most widely available organic meat in the U.S. and predicted to have increased consumer demand and production in the years ahead. Recent reports indicate that organic chicken is purchased by the majority of American organic shoppers (AgMRC, 2018). This is attested by the massive sale of organic broiler chickens and eggs in the U.S., which was valued at $420 and $732 million, respectively in 2015 (USDA NASS, 2016). In 2016, the sale of organic chicken and eggs increased to $750 and $815 million, respectively (USDA NASS, 2017). The increase in consumers’ interest in antibiotic-free, naturally–produced poultry has resulted in the rapid growth of this segment of the poultry market.
Despite market growth and increased sales, the major challenge for the organic poultry segment is production costs, primarily due to higher feed prices. The relatively reduced number of small and medium-sized certified processing facilities also contribute to increased production costs. Although such limitations exist, a growing segment of consumers seem to be willing to pay the premium price for organic poultry meat. Additionally, environmental stewardship has become a major component underlying the sustainability practices in organic production, including specific steps to improve water and air quality, developing unique composting systems and other management practices.

Foodborne Salmonella – A major challenge
A major challenge in any poultry production system is the issue of pathogens. Among the important poultry pathogens, Salmonella is one of the major contributors of human foodborne illnesses in the U.S. The incidence of non-typhoidal salmonellosis has steadily increased over the years, with poultry meat and eggs contributing to a significant 22% of the outbreak-associated Salmonella infections in humans. Salmonella colonizes the intestines of domesticated poultry, and once colonized, the chickens serve as natural reservoir hosts for the pathogen. The pathogen gets excreted through feces with birds showing no apparent signs of infection. The shedding could result in infection of other healthy birds and could lead to contamination of carcasses while processing. Moreover, colonization could also result in contaminating eggs at or after lay.
Since antibiotics cannot be used in organic poultry production, alternative, organic-friendly strategies are warranted to control pathogens, including Salmonella. Besides, the processing of organic poultry requires effective antibacterials to control pathogens in meat and/or eggs. Although alternatives such as probiotics and prebiotics are being explored as potential antimicrobial agents in live production, several limitations exist in the use of these approaches, a major limiting factor being variations in the colonization of the probiotic strains in the poultry gut. Similarly, appropriate prebiotics that can select beneficial bacteria in the gut need to be validated as well. In addition, the option of inorganic and organic acids and other pH altering antibacterials in organic production are sometimes limited due to the neutralization of these compounds with the organic materials present in several processing steps.

Essential oils – Emerging opportunities
An emerging strategy against pathogens that may have a positive impact on organic poultry production and processing is the use of essential oils. Recently, there has been an increased interest in biologically active plant compounds in conventional poultry production for their effects on growth performance, antibacterial activity, improving gut health, and enhancing meat quality. Essential oils are volatile, aromatic oily liquids distilled from plant parts and have a characteristic aroma and unique composition. They are complex mixtures of chemical compounds such as terpenes, terpenoids, aldehydes, alcohols, phenols, methoxy-derivatives and a few others of which terpenes are the most common. A detailed classification could be found in other reviews. Usually, an essential oil will contain several components with two or three major ones at large concentrations ranging from 20% to 70%. Although potentially differing in their constituents, properties that are common to most essential oils include being vaporized with steam, lipophilic nature, liquid state at 18 °C, optically active (ability of essential oil components to rotate the plane of planepolarized light which is an indicator of quality and purity), and solubility in ethanol and lipids.

Major aromatic oils that may have potential in poultry production and processing include nutmeg, lime, mandarine, orange, rosewood, oregano, mountain savory, fennel, turmeric, rosemary, sage, cinnamon, thyme, ginger, eucalyptus, garlic, pimenta, lemongrass, and clove. These essential oils can be used as additives in feed or drinking water in live production, or as antibacterials for the processing of poultry products. Beneficial effects of essential oils are attributed mainly to their antibacterial, antifungal, antiviral, antioxidant, and immunostimulant activities. Also, their function in improving gut health has been reviewed recently, and has been attributed to their digestive conditioning, antibacterial, and microbiome modulation properties. Additionally, other reviews have reported their potential to become replacers of antibiotic growth promoters resulting in improved weight and feed conversion ratio. More specifically, essential oils of peppermint, ginger, thyme, oregano, and some combinations have been reported to improve the average daily gain in broiler chickens. Some studies have indicated improved eggshell strength, egg production, fertility, and hatchability in broiler breeders as a result of essential oil supplementation through feed, although some of the essential oils have affected these parameters adversely. The reasons for the adverse effects have been attributed to ineffective oil concentrations and shorter time of application along with several other potential drawbacks in the implementation of methods.

Antibacterial activity – A major function of essential oils
Our recent literature review indicates that the most important property that essential oils could offer organic poultry production is their antibacterial potential. With no antibiotics being allowed in organic production, essential oils present tremendous opportunity with their different constituent components that could be highly active against the etiological agents of salmonellosis, colibacillosis, mycoplasmosis, and infections by Ornithobacterium, Clostridium, and Coccidia. Additionally, the majority of published studies have reported a Lactobacillus–augmenting effect of the essential oils of garlic, thyme, mint, oregano, and myrtle, indicating that they specifically target to destroy pathogenic microbes and potentially support beneficial microorganisms. Similar to different classes of antibiotics, with phenols, alcohols, ketones, and aldehydes present on their chemical structures, essential oils could exert high antibacterial property against poultry pathogens that have zoonotic potential. It is generally believed that essential oil components can interact with several proteins, including ATPases on the bacterial cell membranes and affect ATP production, ultimately inhibiting energy metabolism. Additionally, essential oil constituents could also result in the lysis of cell membranes and cause denaturation of cellular proteins. Apart from the effects on the cell wall, essential oil ingredients have also been found to have a role in attenuating virulence of pathogens such as cell association, invasion, and motility. Besides, they also have the potential to increase pathogen sensitivity to antibiotics and affect metabolic enzymes. More studies are warranted to accurately understand their antibacterial activities to their cellular and molecular details.

A. Live production
Our investigations have focused on exploring the antibacterial potential of essential oils and their ingredients in live production and processing of organic poultry. Early in our studies with two essential oil ingredients, trans-cinnamaldehyde (from cinnamon oil) and eugenol (from clove oil), we have reported that both essential oils exerted potent antibacterial properties against Salmonella Enteritidis colonization and dissemination to liver and spleen in 20-day broiler chicks and commercial market age. Similarly, we also reported that trans-cinnamaldehyde resulted in the reduction of eggborne transmission of Salmonella Enteritidis in layer chickens. Supplementation of trans– cinnamaldehyde in feed for 66 days at 1% or 1.5% to layer chickens resulted in decreased pathogen populations on eggshells and in yolks. It was also found that essential oils resulted in the downregulation of Salmonella Enteritidis genes critical for oviduct colonization, macrophage survival and systemic dissemination. Recently, we reported that sub-inhibitory concentrations of the aforementioned essential oil constituents resulted in the down-regulation of Salmonella Pathogenicity Island – 1, type three secretion systems, outer membrane proteins, metabolic pathways, and electron acceptors under anaerobiosis, revealing their mechanism of actions at cellular and gene transcription levels.

B. Table and embryonated eggs
Besides live production research, our studies also focus on the application of essential oil ingredients against Salmonella Enteritidis on table eggs. Upadhyaya et al. (2013a) reported that trans-cinnamaldehyde, carvacrol, eugenol, and carvacrol resulted in rapid inactivation (within 30 seconds) of Salmonella Enteritidis populations on shell eggs in the presence and absence of chicken droppings as a contaminant at 32 °C or 42 °C. Additionally, carvacrol, eugenol, and beta resorcylic acid were tested against Salmonella Enteritidis as an antimicrobial coating on eggs. Results indicated that all tested compounds could reduce the pathogen populations to non-detectable levels by day 3, suggesting their potential to be used an antimicrobial coating. Furthermore, the possibility of trans-cinnamaldehyde and eugenol for hatchery sanitation purposes was also explored. Hatcheries are one of the major areas in poultry production where the environment can be potentially contaminated with Salmonella. Both compounds were found to be effective in reducing Salmonella Enteritidis on the eggshells and in the growing embryo after the second inoculation on embryonated eggs and subsequent fumigation with essential oil ingredients.

C. Meat processing
Ongoing studies with essential oils or their active components against Salmonella in poultry processing indicate their potential for post-harvest use. For example, Pimenta and Lemongrass essential oils were able to reduce Salmonella Heidelberg on turkey and broiler skins, respectively, when used as chilling dip treatments. Both studies indicated that essential oils were highly effective in reducing the pathogen to non-detectable levels by enrichment steps in chilling waters. On the other hand, trans-cinnamaldehyde was found to be an effective antimicrobial in scalding water and on poultry parts, comparable to commonly used antimicrobials in organic processing. Ongoing studies determining the antibacterial potential of other essential oil ingredients are underway in our laboratories (USDA NIFA Project #2017- 51300-26815).

Research projects narrated in this document are funded in part through the USDA National Institute of Food and Agriculture Organic Agriculture Research and Extension Initiative Grant# 2011-01955 and #2017-51300-26815, and Minnesota Agricultural Experimentation Station (MIN-16-102 and MIN-16-120).

From the Proceedings of the 2019 Midwest Poultry Convention