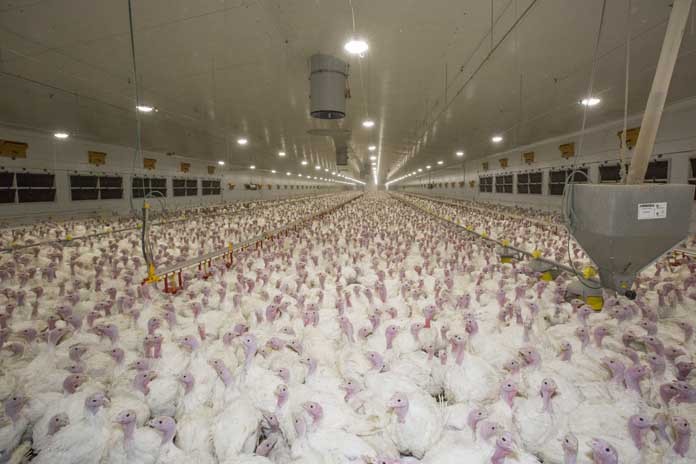 A turkey health survey of US veterinarians in turkey production ranked blackhead position #13 (#11 prior year) compared to #22 in 2006; the survey ranked and scored 36 current disease issues (1= no issue to 5 = severe problem) and had a survey response (reply) of 100% (n=25). Blackhead, also known as Histomoniasis, is one disease with no efficacious drug approved for use in turkeys.
There were 55 reported cases of blackhead (2015) an increase from 61 the prior year, and a record 108 in 2010. Histomoniasis occurs regionally and seasonally in turkeys, and can result in significant mortality. Dimetridazole was extremely efficacious and previously approved for use in turkeys for the prevention and treatment of blackhead; it was banned in 1987.
The lack of any legal treatment for histomoniasis is of concern, especially in the case of valuable turkey breeder candidate flocks. Losses to blackhead have been severe in several areas of Europe, and sporadic cases are occurring in North America. On April 1, 2015, the sponsor announced that it would discontinue marketing nitarsone, and the approval of of nitarsone in animal feed were withdrawn as of January 1, 2016; following this action, there are no FDA-approved, arsenic-based drugs for use in food producing animals. Nitarsone was FDA approved for the prevention of histomoniasis (blackhead disease) in turkeys and chickens, and was the only approved animal drug for this indication. There are neither effective nor approved products for treatment of blackhead outbreaks. Under the announced FDA phase-out plan, the strategy allowed affected producers the opportunity to consider alternatives for managing this disease in the future.
Blackhead Disease, also known as Histomoniasis, is caused by Histomonas meleagridis, a flagellated protozoan. Classically indirect transmission is accepted, whereas the bird ingests embryonated ova of cecal worms (Heterakis gallinarum) that contain the Histomonas organism. Histomonas meleagridis is pleomorphic; in the cecum Histomonas is flagellated whereas in tissues (cecal wall, liver) it is a strictly amoeboid organism. Heterakis gallinarum, also known as cecal worm of poultry, acts as an intermediate host. A new parasitic cycle starts with the intake of ceca-dwelling forms of the protozoa Histomonas meleagridis by adult cecal worms in the ceca of the turkey.
New research and field observations support the opinion that direct transmission is possible as well where the Histomonas are able to infect turkeys for a short period after being excreted. Since oral transmission seems impossible, it has been demonstrated that the mechanism for this is “cloacal drinking”. Dr. McDougald suggests that the Histomonas protozoa in the feces, directly infects new turkeys via the cloacal route, and can spread rapidly through the flock.

Past
Dimetridazole was approved for use in turkeys for the prevention and treatment of blackhead (histomoniasis, infectious enterohepatitis), and for increased weight gain (growth promotion) and improved feed efficiency. CVM had documented evidence that dimetridazole medicated premix and dimetridazole soluble powder had been used widely for the treatment and prevention of swine dysentery. This use of dimetridazole in swine was not approved. There was also reported evidence that dimetridazole was a carcinogen. There were concerns that the use of dimetridazole in unapproved food animals would result in illegal drug residues in meat, milk, and eggs and therefore represent human food safety issue. On December 16, 1986, FDA published a Notice of Opportunity for Hearing on a proposal to withdraw approval of dimetridazole. The approval for dimetridazole was revoked in a Federal Register document dated July 6, 1987.
Histostat-50® (nitarsone, 4-nitrophenylarsonic acid; Zoetis, Florham Park, NJ) was approved for use in the feeds of chickens and turkeys at 0.01875% as an aid in the prevention of blackhead (21 CFR §558.369). Early medication was essential to prevent spread of the disease. Histostat once had limited approval internationally, including, Canada, Chile, Morocco and Israel. Nitarsone was used by the US turkey industry for approximately 50-years. The FDA approval for nitarsone was withdrawn as of January 1, 2016.
In the European Union (EU) Histomoniasis was well controlled with dimetridazole (DMZ) and Nifursol. The EU banned the use of dimetridazole, after 30-years, as a treatment (c.1995) and then as a feed additive (c. 2000). Salfuride as a feed additive was banned in March 2003 in the EU. Dimetridazole was banned in the UK in May 2002. The subsequent ban left the EU to prevent, control and treat blackhead with strict biosecurity and hygiene measures. Since the 2003 ban, acute and severe cases of Histomoniasis in turkeys have been documented in France, United Kingdom, Spain, Netherlands, Germany and many other countries.

A presumptive diagnosis of blackhead disease can be made based on clinical signs (depressed, underweight, morbid and reluctant to move), mortality patterns, and macroscopic lesions. Upon necropsy the characteristics bulls-eye-like liver lesions and cecal lesions (cheesy caseous cores, inflammation of the serosal surface and occasional ulceration) are very indicative. Although not pathognomonic, sulphur yellow feces may be noted. A diagnosis should be confirmed by histopathology. Culture of the organism may be attempted using special media; bacterial contamination and subsequent overgrowth is a problem. Passage of liver and cecal homogenate on turkeys between 2 to 4 weeks is a time-consuming, complicated but efficacious method. Microscopic examination of wet smears with phase contrast techniques or appropriate cytology stains can assist in diagnosis of the organism. Various PCR techniques have been investigated and may be available; these PCR techniques may allow for testing of organs as well as fecal samples. In light of the recent losses of specific chemotherapeutics, the industry is likely to see an increased incidence and severity of blackhead cases in turkey flocks, especially in geographic regions densely populated with both chickens and broiler breeders and turkeys.
Where possible, disease prevention and control efforts should focus on prevention and control of multifactorial aspects of blackhead disease, using a combination of approaches, including identifying sources of potential infection, assessment and changes to management protocols, and use of alternative, non-antimicrobial products. Strategies will include addressing both Histomonas and Heterakis in poultry flocks – chickens, breeders, and turkeys.
From the proceedings of the 10th Turkey Science and Production Conference
Contact: steven.clark@devenishnutrition.com