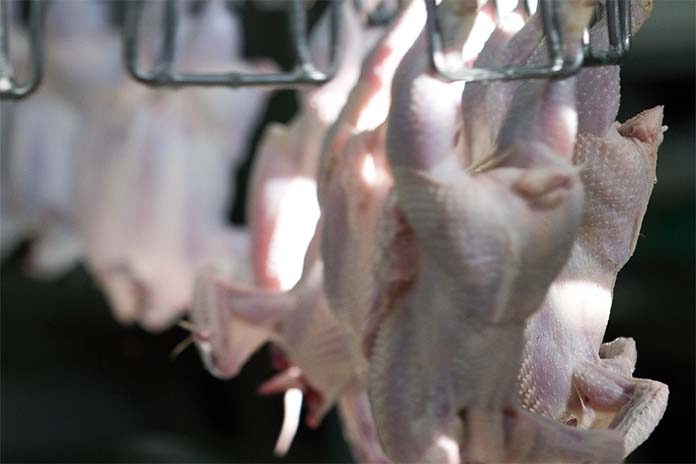 Carcass chilling in subzero saline solutions has not been studied enough although it can transfer the carcasses temperature to the chilling media in an efficient way.

In 1978, Janky et al. compared broiler quality after no chilling for hot-packaged carcasses, after chilling overnight in 5% NaCl solution at -1 °C, and after chilling overnight in ice slurry at 1 °C. The breast fillets from NaCl-chilling showed lower shear force, higher moisture content, higher cooking yield, and better sensory attributes than the ice-slurry chilling or no chilling.
The overnight chilling, however, is too long to chill and resulted in water and brine pickup by 5.1 and 6.3% respectively, which are not desirable nowadays. When broilers were chilled for 4 h, breast fillets in 5% NaCl solution at -1 °C showed more water and sodium absorption than the fillets in water at 1 °C (Hoey et al., 1983). No study has been conducted to chill broiler carcasses in sub-zero brine solutions with various salt contents. Therefore, the purpose of this research was to investigate the effects of sub-zero brine chilling on chilling efficiency and product quality of broiler carcasses.

Materials and methods
Brine chilling solution, brine ice preparation, and broiler carcass chilling.
In this study, three experiments were conducted to chill broiler carcasses using different saline solutions and chilling temperatures in the Meat Processing Center at California Polytechnic State University (Cal Poly, San Luis Obispo, CA) or in a local poultry processing plant. Prior to carcass chilling, brine solutions (w/w) were prepared in 20 gallon containers and placed in a freezer room at -23 °C. Eviscerated broiler carcasses were tagged, weighted, and chilled by submersing in one of the prepared chilling solutions with mechanical agitation. Before chilling, one medium carcass per chilling was selected to monitor the internal breast temperature every 5 min until the carcass temperature reached ~ 4 °C, using a digital thermometer logger. During chilling, regular or brine ice was added to maintain the target solution temperatures. After chilling, carcasses were hung for 5 min drain and weighed for post-chill weight.

Experiment I: broiler carcass chilling using brine solution at 0, 4 and 8%
A total of 72 male broilers (Ross 708, approximately 45 days old) were used for 3 replications (24 birds/replication) in three different days. Birds were randomly picked from the processing line in a local processing plant after evisceration or after pre-chilling. Those birds were subjected to one of three chilling treatments as following: one ice slurry control (0% NaCl/0.5 °C) and two saline solutions (4% NaCl/-2.41 °C and 8% NaCl/-5.08 °C) for chilling broilers immediately after evisceration or after pre-chilling (0% NaCl/14 °C) in the plant.

Experiment II: broiler carcass chilling using brine solution at 0, 1, 2, and 3%
A total of 36 male broilers (Ross 708, approximately 45 days old) were used for 3 replications (12 birds/replication). After 12 h feed withdrawal, birds was transported from the Poultry Unit to the Meat Processing Center at Cal Poly. Each bird was shackled, electrically stunned for 3 s (40 mA, 60 Hz, 110 V), and bled for 90 s by severing both carotid artery and jugular vein on one side of the neck. Birds were then subjected to scalding, defeathering in a rotary drum picker for 25 s, manual eviscerating, and washing. Resulting carcasses were hung for 5 min drain, weighed for pre-chill weight, and subjected to chilling after wing tag.

Experiment III: Carcass chilling using brine solution at 0, 3 and 4%
A total of 48 male broilers were obtained in a local processing plant for 4 replications (12 birds/replication). Each bird was weighted, tagged, and chilled as similar in Experiment I, using one of three chilling solutions:

pH, R-value, and sarcomere length
The pH value of breast muscle was measured with a pH electrode to a pH meter, using the iodoacetate method of Sams and Jancky (1986). R-value (ratio of inosine:adenosine) was assessed as an indicator of adenosine triphosphate (ATP) depletion in the muscle using the method of Thompson et al. (1987). Sarcomere length was evaluated for the status of muscle contraction using a laser diffraction method (Cross et al., 1980).

Cooking yield and shear force
For cooking yield and shear force, left fillets were removed at 24 h post mortem per treatment, which were weighed and placed on stainless trays on a stainless steel rack. The fillets were cooked to an internal temperature of 76.7 °C in a preheated convection oven at 177 °C following USDA-Food Safety and Inspection Service (2001) guidelines. Temperature was monitored with 2 thermocouples inserted to the thickest parts of 2 breast samples on 2 trays. After cooking, the fillets were individually wrapped with foil and stored overnight at 3 °C in plastic bags. The following day, the cooked breasts were brought to room temperature and weighed again to determine cooking yield. Shear force was determined according to the razor-blade method described by Cavitt et al. (2004). A texture analyzer was calibrated with a 5-kg load cell. The razor blade (height, 24 mm; width, 8 mm) was set at 10 mm/s, and the test was triggered by a 10-g contact force. The shear force value (N) was calculated as the maximum force recorded during the shear. Two shear force measurements per breast fillet were made.

Results and Discussion
Experiment I Shear force: To identify the best chilling condition based on the Experiment I and II, three salt solutions (0, 3, and 4% NaCl) were selected to evaluate the effect of carcass chilling on meat tenderization. Results indicated that shear force was stepwise reduced as NaCl increased from 0 to 4% and the temperature decreased from 0.5 to -2.41 °C in the chilling solution (Figure 4). Based on these results of Experiment I to III, an ideal chilling condition for broiler tenderization appears to be 4% NaCl solution at -2.41 °C.

Conclusions
Improvement of poultry chilling efficiency and product quality is desirable in poultry processing plants. In this study, broiler carcasses have been chilled using various saline solution and chilling temperatures from 0 to 8% salt and from 0.5 to – 5.08 °C. Broiler chilling efficiency was significantly improved and the breast fillet tenderness significantly increased as the solution temperature reduced from 0.5 to -5.08 °C while the salt content increased from 0 to 4%, with no significant difference observed between 4% NaCl/-2.41°C and 8% NaCl/-5.08 °C. Based on these results, broiler carcasses chilled in 4% NaCl/-2.41 °C appears to be ideal to improve both chilling efficiency and meat tenderness compared to the carcasses chilled in 0% NaCl/0.5 °C.