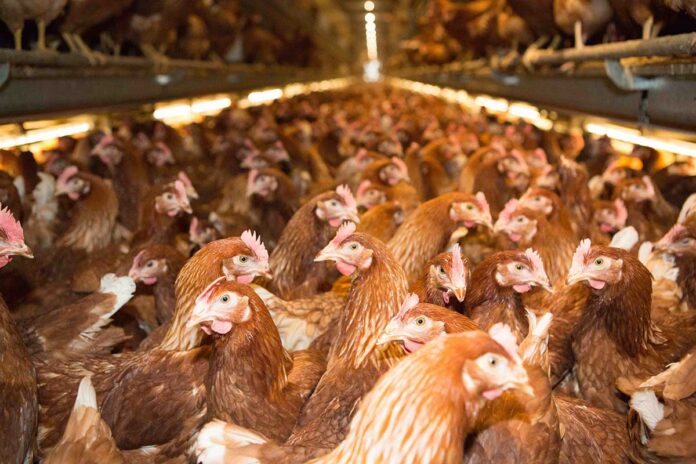 During 2017 and 2018 Infectious Coryza was detected in several commercial vaccinated egg layer flocks in California. The Avibacterium paragallinarum strains isolated from infected layers were subsequently characterized as genotype C and serotype C-2. This serovar and genotype is included in the vaccines that are commercially available and used in commercial layers in California.

Commercial hens vaccinated with an inactivated commercial and an autogenous vaccine, were challenged with A. paragallinarum using different vaccination protocols.

The A. paragallinarum isolate utilized for challenge was selected from a 2017 field strain recovered from layers infected during the outbreak. Information was collected on clinical disease, respiratory signs, egg production and bacterial shedding post infection.

Pathogen and antibody screening
Blood samples were collected, and sera screened for the presence of antibodies against AI, IBD, IBV, MS, MG and NDV. Swabs were collected for the detection of AMPV, ILT, MG, MS, IBV and A. paragallinarum (AP).

Bacterial culture
A bacterial culture of AP was obtained from clinical cases isolated on blood agar streaked with S. aureus. Titration was performed using a qPCR.

post challenge (dpc) to measure AP load. Daily egg production, clinical and respiratory signs were evaluated. Birds were necropsied at 8 dpc. Gross pathology information was collected. Clinical signs were scored from 0 to 3: 0= no signs; 1= watery foamy eyes and or nasal exudate; 2= nasal discharge and swelling of the infraorbital sinus and 3= severe swelling with or without conjunctivitis and apathy (1). Respiratory signs were scored from 0 to 3: 0= no signs, 1= mild nasal sounds, 2= tracheal rales and 3= tracheal rales that can be heard from distance (3).

Before challenge, commercial hens were screened serologically for the presence of antibodies against pathogenic agents that could potentially influence the clinical outcome of the experimental challenge. Positive titers against IBD, IBV and NDV reflected the vaccination protocol administered to the hens. MS was positive to antibodies in 95% of the tested samples while MG was positive in 5%. There was molecular detection of ILT in 10% of the samples, MG in 3%, MS in 96%, IBV in 2.5%. All birds were AP negative before challenge.

While bacterial load 3dpc did not show a reduction in bacterial shedding, at 8 dpc we detected a significant reduction in shedding in the group vaccinated with two doses of the commercial strain at 6 and 10 weeks of age (P<0.05), demonstrating the effectiveness of the commercial vaccine. A shedding reduction suggestive of significance was detected in the group of hens vaccinated with one dose commercial and two doses of the autogenous vaccine (0.05<p< 0.01) (Figure 2). Respiratory signs started two days post challenge and persisted for the whole experimental period. No differences were detected between the groups (vaccinated vs non-vaccinated challenged). Gross pathology was characterized by peritonitis (between 20-40% of birds) and perihepatitis (between 10 and 50%) in all vaccinated and non-vaccinated AP challenged groups.

Complex upper respiratory diseases are common in production settings. Prior to challenge, birds were antigenically positive for ILT, 19 weeks after the last ILT vaccination, and IBV, 12 weeks after the last vaccine. This illustrates a complex scenario in which vaccine viruses might be manifesting as a rolling reaction on affected premises. In our experiment, clinical signs support the complex scenario of the synergistic effect of co-challenges additional to the controlled coryza exposure. Bacterial load at 8 dpc demonstrated a neutralizing effect of the two-dose commercial vaccine application. This result correlates with the genotyping and serotyping of the bacteria that was characterized as a C genotype, serovar C-2 strain, the same serovar of AP included in the vaccine. Clinical signs described in the field were synonymous with complicated coryza cases that are manifested pathologically with septicemia lesions. Those cases are usually related to co-infection with a combination of pathogens and usually not only by a coryza challenge. Special attention needs to be taken to alternative systems where higher particulate matter and ammonia (2, 4) and higher gram-negative bacterial concentrations (5) have been detected. These changes in the environment might induce irritation and inflammation of the upper respiratory tract, changing the respiratory microbiota and ultimately facilitating co-infection with agents such as IBV, AP, and ILT thus generating a complex upper respiratory tract infection. The gross pathology seen 8 dpc is characteristic of a complex infectious coryza case.