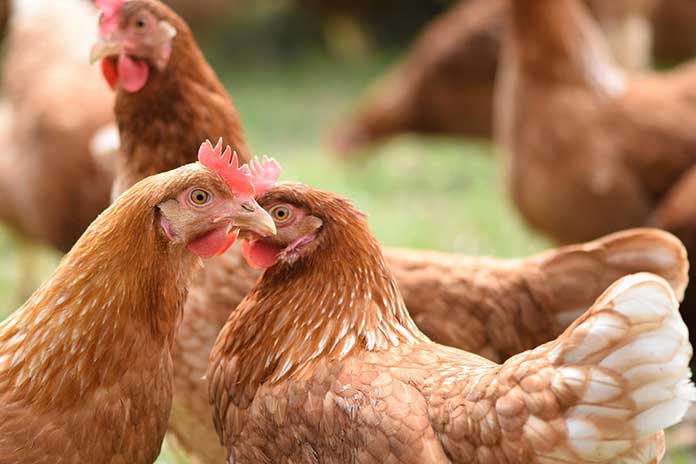 Scientists at The Pirbright Institute have engineered synthetic antibody molecules that can be administered to poultry to reduce the symptoms of Influenza, as well as decreasing the amount of influenza virus they shed into the environment. These results suggest that there is potential for their use as immunotherapy treatments to reduce the burden of Influenza in poultry.

The team generated synthetic antibodies against the H9N2 strain of Avian Influenza, a type of influenza virus that poses great risks to the global poultry industry as well as to the health of other avian and mammalian species owing to its ability to readily mutate and adapt to new hosts.
The modified antibody segments, known as single chain variable fragment antibodies (scFvs), were shown to prevent the H9N2 virus from entering cells in laboratory tissue cultures. Further testing demonstrated that chickens immunised intranasally with scFvs produced lower levels of virus and presented decreased weight loss compared to those that had not received treatment.
The scFv antibodies work by binding to proteins on the outside of the influenza virus, called haemagglutinin (HA), that attach to receptors on host cells. This prevents the virus from entering the cell and replicating, offering rapid protection to infected birds.
Immunotherapy treatments such as synthetically made antibodies have become popular as they are able to be rapidly produced in large quantities in cultured cells, function in a similar way to natural antibody immune responses and provide immediate protection compared to vaccines.
To create the scFvs, the team immunised mice with an influenza vaccine, which triggered the production of mouse antibodies that could neutralise the H9N2 virus. The genetic code for two sections of the antibodies that bind to the HA protein was then sequenced. Using genetic engineering, they linked these two sections together to create one new smaller antibody molecule (the scFvs).
By generating these smaller molecules, the team could overcome issues presented by using whole antibodies such as lower production rates and increased likelihood of immune rejection by species other than chickens. The scFvs created in this study, published inVaccines, have additional advantages including their ability to be mass produced in insect cells and the fact they could work against the virus in all hosts without adaption.
Professor Munir Iqbal, Head of the Avian Influenza Group at Pirbright, said: “These results are encouraging and demonstrate that scFvs could provide a quick and efficient way of reducing the clinical signs of Influenza and its spread in infected flocks, reducing the risk of transmission from poultry to humans. The next step will be to establish the best method for administration, whether this be intranasally, as we have done in this study, or via aerosol or viral vector delivery systems. We anticipate that this type of immunotherapy could also be used to treat other viral diseases of poultry and humans by creating the appropriate synthetic antibodies for those diseases.”
This work was supported by the Biotechnology and Biological Sciences Research Council (BBSRC), part of UK Research and Innovation (UKRI), and British Council Newton Fund Institutional Links programme grant number IL3261727271 under the Newton-Mosharafa Fund partnership. The grant is funded by the UK Department for Business, Energy and Industrial Strategy and Science, Technology and Innovation Funding Authority (STIFA) and delivered by the British Council.
The Newton Fund builds research and innovation partnerships with 17 active partner countries to support their economic development and social welfare, and to develop their research and innovation capacity for long-term sustainable growth. It has a total UK Government investment of £735 million up until 2021, with matched resources from the partner countries. The Newton Fund is managed by the UK Department for Business, Energy and Industrial Strategy (BEIS), and delivered through seven UK delivery partners, which includes UK Research and Innovation (comprising the seven research councils and Innovate UK), the UK Academies, the British Council and the Met Office.