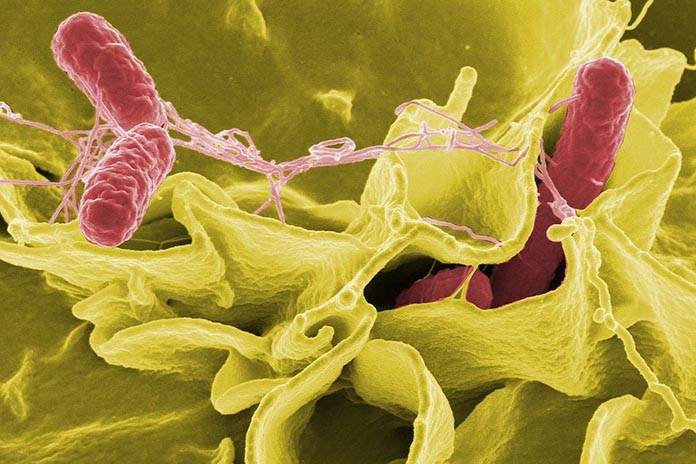 Worldwide, tens of millions human cases are reported every year for salmonellosis. This makes it one of the most common foodborne diseases, which can end lethally, depending on the salmonella strain and host factors. More than 2,600 different serovars are known nowadays. Poultry meat is a potential carrier for the animal-food-human transmission route.
In North America, Salmonella enterica serovar Heidelberg is one of the most common serovars isolated from people suffering from salmonellosis (Patchanee et al., 2008). Furthermore, Salmonella enterica may carry antimicrobial resistance genes adding further to a potential risk for animals and humans. The objective of the study was to investigate the effect of a standardized blend of plant-derived isoquinoline alkaloids (IQs, Sangrovit® G Premix) in broiler chickens infected with Salmonella enterica serovar Heidelberg.

The use of IQs reduced the prevalence and Salmonella level in the positive ceca. This will decrease the pathogen pressure for the next growout as chicks are exposed to less Salmonella. Consequently, this can lead to a significant Salmonella reduction in the broiler house over time. Furthermore, a beneficial significant effect on FCR was observed in challenged chicks if IQs were applied, improving economics.
In conclusion, the use of a standardized blend of plant-derived isoquinoline alkaloids offers a promising solution to support broiler chickens challenged with Salmonella and contribute to food safety and an economical broiler production.
From the Proceedings of the 2017 Australian Poultry Science Symposium