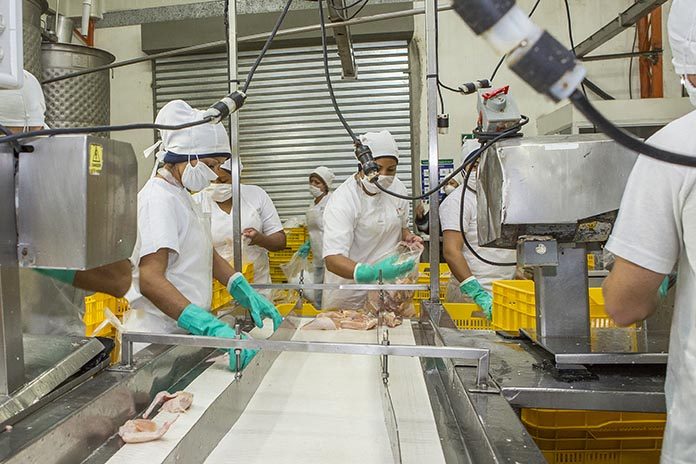 Commercial on farm slaughter could eliminate many potential animal welfare issues associated with cooping, transport, dumping, and shackling of live broilers. However, concerns regarding carcass processing efficiency and microbiological status following the delay between slaughter on the farm and scalding at the processing plant following transport must be investigated. Live broilers obtained from a commercial processing plant were transported to Auburn University, stunned at 15 V for 10 s, and then bled for 2 min in batches of 5.

Carcasses that were delayed prior to scalding were held suspended in shackles for 4 h at refrigerated (4 °C), room (27 °C) or body (40 °C) temperatures. One control batch of 5 carcasses was processed without scalding delay. Prior to scalding, 6 wing secondary remiges and 6 tail rectrices were extracted and maximum feather retention force (FRF) measured. All carcasses were hard scalded at 60 °C for 60s, de-feathered for 30 s, and sampled post-evisceration for microbiological analysis. Whole carcass rinses (WCR) were sampled for aerobic plate count (APC), Enterobacteriaceae (EB), Salmonella, and Campylobacter.Ilea and ceca were sampled for Lactobacillus, EB, total anaerobes (TA), Salmonella, and Campylobacter. At slaughter, Carcass holding temperature significantly impacted wing and tail FRF for all four treatment groups (P<0.0001).

Carcasses held at 4 °C had the highest peak FRF for both wing and tail feathers (4.26, 1.96 kgf) followed by the non-delayed control group (3.19, 1.66 kgf), followed by the group held at 27 °C (2.49, 0.94 kgf), and the group held at 40 °C (0.89, 0.52 kgf). No significant differences in bacterial counts were detected for WCR, APC, or EB or for ilea or ceca Lactobacillus, EB, or TA (P>0.1970). There were significantly fewer Salmonella WCR positive samples for the 40°C slaughter carcasses in comparison to 4 °C or 27 °C carcasses (20% vs. 100%). Significantly fewer 27 °C held ilea were positive for Campylobacter when compared to 40 °C held carcasses (20% vs. 100%). No other treatments were significantly different for Salmonella or Campylobacter prevalence. This study revealed that carcass holding temperature following slaughter significantly impacts the force required for feather removal while having only minimal impact on carcass microbiology.

From the Proceedings of the 2019 International Poultry Scientific Forum