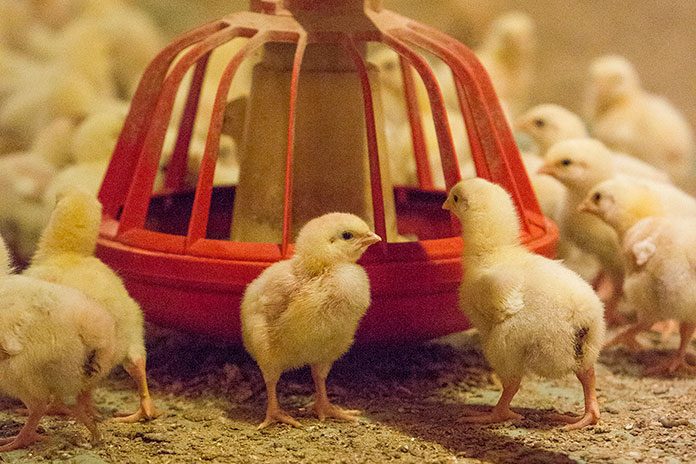 Due to customer demands, producers have been asked to change the way they grow production animals, specifically through the removal of antibiotics. With this need comes necessary changes to animal production as a whole, starting with management, feed, and vaccination programs. To make those changes, an endless number of alternatives are being considered in order to meet the same feed efficiency, growth rate, and egg production standards that are accomplished with antibiotics. With that, comes a need to better understand how gut health is affected by these alternatives.

Factors that contribute to gut health
Gut health in both human medicine and animal health has been defined in various ways. It was initially described that good gut health was the absence of illness. However, through our development of molecular tools and a better understanding of intestinal biology, it is clear that there are many factors that contribute to gut health. The intestinal barrier, microbiota and intestinal immunity can be considered the three main factors that attribute to gut health, but more importantly the interactions of these systems.
Soon after hatch, the chick’s gastrointestinal (GI) tract comes into contact with exogenous microorganisms and quickly develops into a complex microbial ecosystem. Each section along the intestinal tract contains distinct microbial communities, in which multiple species of Lactobacillus, Enterococcus and Clostridium mostly populate the ileum as opposed to species of Bacteroides, Bifidobacterium, and Clostridium in the cecum.
The relationship between the host and microbiota can be described has a symbiotic one, in which both benefit. The host provides a protected, nutrient-rich environment which allows the microbiota to establish a diverse, yet remarkably resilient ecosystem. In return, the microbiota provides resistance to the colonization of pathogenic microbes, aid in the development and maintenance of intestinal and systemic immunity, support intestinal structure development, and produce nutritional factors. Any dramatic shifts in the microbial population due to dietary changes, or pathogens can be detrimental to the host.

The epithelial barrier has the large task of absorbing nutrients, yet at the same time protecting the host from invading pathogens, toxins, and antigens, as well as the abundant microbial populations in the intestine. Besides nutrient absorption and host protection, enterocytes are capable of acting as frontline sensors to microbial encounters in order to guide immune responses. Specialized epithelial subsets enteroendocrine cells, goblet cells, Paneth cells, and M cells also contribute to maintaining a physical (i.e. mucus) and chemical barrier (i.e. β-defensins) between the outside environment and the host. An important component to maintaining the intestinal barrier are tight junctions, which are made up of multifunctional protein complexes. Tight junctions seal the paracellular space between epithelial cells, thus preventing the translocation of microorganisms and other antigens across the epithelium. Tight junctions are highly dynamic structures, and their permeability is regulated by various factors such as diet, microbes, inflammation.
With the continual exposure of microbiota and both dietary and environmental antigens, the intestinal immune system must balance between tolerance and responding to challenges. Thus, the intestinal immune system plays a huge role in overseeing the interactions between the host and the microbiota, through a network of immune cells, cytokines, chemokines and other immunological mediators. Hooper and Macpherson describe the intestinal immune system as having three levels of protection each with distinct mechanisms. The first layer of protection is the secretion of chemical barriers, such as secretory IgA, that minimize the ability of bacteria to adhere to the epithelial lining. The second layer is the detection and elimination of bacteria that has translocated by phagocytic cells in addition to their role in intestinal wound healing. The third layer is the network of cells and immune proteins that allow the intestinal immune system to quickly respond to infection using minimal inflammation, and containing the infection at the intestinal level. Short chain fatty acids
In general, certain organic acids have been utilized as food additives and preservatives. There has been growing interest in the use of short chain fatty acids, particularly acetic, propionic and butyric acid, in animal production due to their positive effects on human health. Some of the benefits of short chain fatty acids are that they are natural, an energy source for epithelial cells (butyrate mostly), and ability to inhibit histone deacetylase activity and consequently modulate gene expression.

Short chain fatty acids on gut health
Besides being an energy source, short chain fatty acids, more so butyrate, have been shown to effect epithelial barrier integrity and intestinal immunity. Specifically, with the epithelial barrier, short chain fatty acids have been shown to increase mucin production, regulate epithelial cell proliferation, and induce the up regulation and/or assembly of tight junctions. It was demonstrated in rats that butyrate administration attenuates intestinal injury and that the protective effect of butyrate may be associated with preservation of the intestinal barrier and suppression of inflammatory cell infiltration into the intestinal mucosa.
Furthermore, butyrate seems to exert a broad anti-inflammatory phenotype by affecting immune cell migration, activation, and proliferation. Short chain fatty acids as well as butyrate itself have been shown to induce host defense peptide production, a critical component of innate immunity. In the chicken, avian β-defensins and cathelicidins are expressed in a wide range of tissues, and have a wide spectrum of antimicrobial activity. Butyrate enhanced the production of host defense proteins at both the cellular and tissue level and reduced S. enteritidis titer in cecal contents. Furthermore, host defense peptides play an active role in intestinal immune responses by recruiting and activating immune cells, binding and neutralizing bacterial endotoxins, and promoting wound healing.

Conclusion
The microbiota, epithelial barrier, and intestinal immune system and their interactions are critical in both the development and maintenance of proper gut health. Proper gut health begins at the cellular level (i.e. bacteria, immune cells) whose interactions can affect tissue structure (i.e. villi structure) and function (i.e. absorption), ultimately effecting the animal’s ability to thrive in production systems.
In order to maintain the same productivity without antibiotics, we must change the way we think about intestinal health and animal productivity; and place intestinal health at the same level of importance as other management practices.