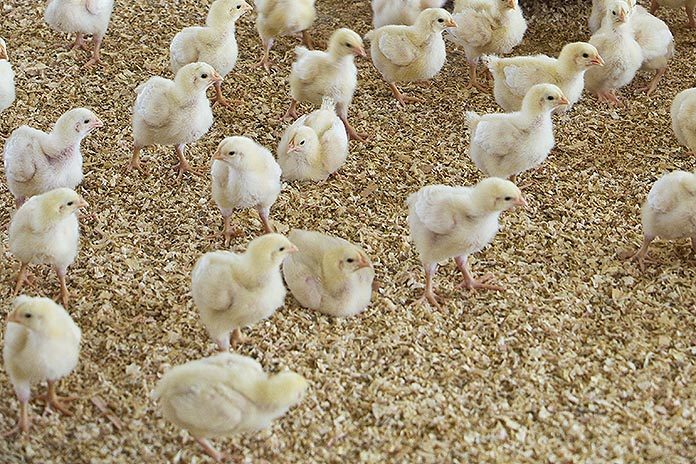 Phasing out of in-feed antibiotics in the poultry industry has caused necrotic enteritis (NE) to become a primary concern in commercial poultry production in many countries.

For this study, jejunal tissue samples were obtained from a previous experiment conducted by Rodgers et al. (2015) from necrotic enteritis challenged and unchallenged broilers (Ross 308 males). Briefly, to induce necrotic enteritis, birds in the challenge group were inoculated with 1 mL mixed Eimeria species on day 9 followed by 1 mL of approximately 108 CFU of a pathogenic strain of C. perfringens type A on days 14 and 15. Birds in both groups were fed similar wheat-based diets. On day 16, one bird from each pen was randomly selected and euthanised to collect 2 cm of jejunum for RNA extraction. RNA-seq was performed by using the extracted RNA of four birds of each experimental group.

AGRF© cDNA libraries were synthesised following the TruSeq RNA library preparation protocol and sequenced on an Illumina HiSeq200 platform. After quality assessment, cleaned reads were mapped to the reference genome Gallus gallus (Ensembl) using TopHat2. The differentially expressed genes (DE) were identified by contrast control and treatment using a TMM normalization in edgeR and the voom function in limma (adjust P-value ≤ 0.05 and log2 FC ≥ 1). The DE genes were used to perform functional analysis in DAVID and to find protein-protein interactions with STRING.

A total of 377 genes was differentially expressed; from those genes 207 were up- regulated and 170 were down-regulated. In this study, PPAR signaling, essential in the regulation of cellular differentiation, metabolism and fatty acid degradation was the enriched pathway. The challenged birds showed upregulation of LCK (P < 0.01), TMEM173 (P < 0.01), and ZAP70 (P < 0.05) which are all related to T-cell function and inflammation. From the protein-protein interaction network, downregulation of genes ECI2 (necessary in fatty acid degradation) (P < 0.001), ALDH2 (takes part in different amino acid pathways and also glycogenesis) (P < 0.001) and EHHADH (essential in many different pathways such as bile acid biosynthesis, fatty acid degradation and also amino acid metabolism) (P <0.01) was observed in the challenge group. These proteins seem to have an important role during necrotic enteritis infection by interacting with multiple genes. It could be concluded that necrotic enteritis challenge affects different pathways and protein signaling, especially related to digestion and inflammatory responses, both reducing nutrient absorption that can subsequently be the reason for impaired growth in necrotic enteritis challenged birds.
Rodgers NJ, Swick RA, Geier MS, Moore RJ, Choct M, &. Wu S-B (2015) Avian Dis. 59: 38- 45.

From the Proceedings of the 2019 Australian Poultry Science Symposium.