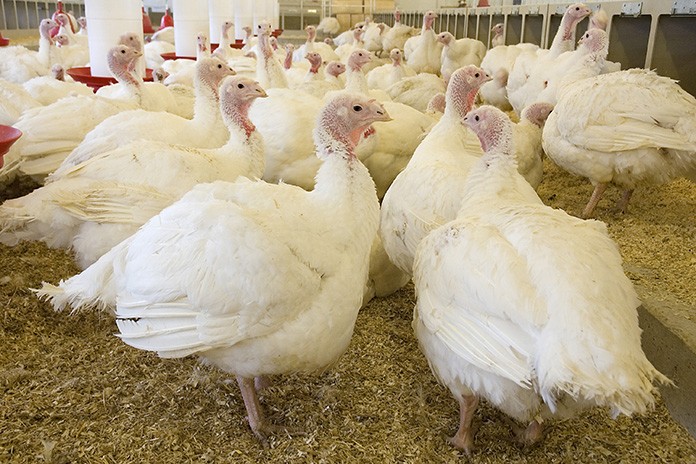 All species of today’s domestic plants and animals followed an analogous pattern of multi-generational change influenced by humans. The modern populations of turkeys followed this path to domestication, starting about 2000 years ago in the geographical area currently occupied by Mexico. The direction of change during domestication aimed to secure a predictable supply of resources for human use. Among these desired resources, meat played a very important role.

Meat in the human diet
A balanced diet, enriched in nutrients by the inclusion of cooked meat, gave a boost to the evolution of the omnivore human, especially to the expansion of the brain. The brain is a relentless devourer of calories. Meat in the diet supplies the body with all essential amino acids and many of the vitamins and microelements and thus complements very well the use of plants as main provider for calories.
With the establishment of permanent settlements and the ever-expanding population, the demand for meat provided by the domestic species increased continuously. In time, this led to the development of the sophisticated meat production systems that exist today. As a modern source of lean, healthy protein, the turkey industry is at the forefront of various meat production systems.

Meat providers – is there a poultry advantage?

All industries are under increasing pressure to minimise their impact on the environment by lowering emission intensities. Most often, for the meat industry, this is expressed as the amount of carbon dioxide equivalent (kg CO2eq) released per kilogram of edible protein produced. This is reflective of the feed efficiency of the species but also by the system of production employed.
Poultry release the least amount of CO2eq of all terrestrial domestic species (see chart). Even the most advanced production systems for beef cattle will release ten times as much carbon dioxide per kg of edible protein compared to current turkey production systems.
Reduction of emission intensities for the various animal protein industries are driven largely by the modern production of chicken, turkeys and pigs, fed with balanced high quality diets, and which use livestock populations of high genetic merit. How does genetic merit contribute to the turkey industry? How is it delivered?
Of all factors that determine the output from animal husbandry the genetic merit is the only one to have a compounding effect over successive generations. A significant level of investment is needed to be able to support continuous genetic improvement. The core organizational elements in a turkey breeding enterprise and the flow of genetic material and information among them are shown in the flow diagram.
Strict biosecurity rules ensure the highest health status is achieved. Data is collected at all stages and used in comprehensive genetic evaluations and decision making pathways that allow geneticists to select the best group of individuals to become parents of the next generation. Do we have a crystal ball? What is the way forward?
The current economic context leads us to the conclusion that genetic improvement in turkeys needs to focus on balancing multiple-trait breeding objectives.
The success of a commercial turkey breed is determined by its capacity to deliver not only on growth, but also on efficiency, reproduction, health and welfare traits, as well as having a low environmental impact. We achieve this by employing sophisticated selection technologies and novel methodologies to produce commercial turkeys that are successfully and profitably grown across a range of production environments, under different feeding regimes and climate conditions.