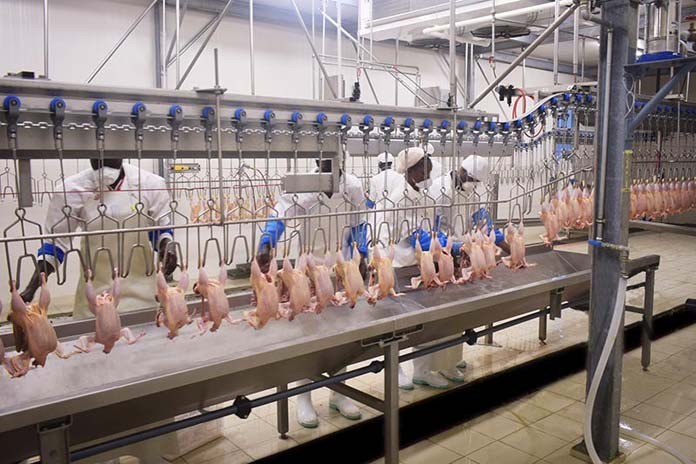 With its large integrated poultry enterprise, the long established Senegalese company Sedima is well-known for its modern and ambitious approach to the business. It has now taken the final step towards complete integration by building a greenfield processing plant from scratch, fully equipped with Marel Poultry solutions.
With its new greenfield plant in Dakar, the capital of Senegal, now fully operational, Sedima is an excellent example of a professional, high capacity industrial poultry processor in West Africa. The plant has been designed for a capacity of 4,000 bph (66 bpm) and has been prepared for expansion to 6,000 bph (100 bpm).
Start-up of the new plant in January 2017 was a major milestone for Sedima. The process was then optimized step by step, allowing the company to benefit from the full potential of the automated Marel Poultry solutions installed.

Highly Automated
The new Sedima plant is equipped with Marel Poultry solutions, from live bird handling, electrical stunning, to scalding, defeathering, evisceration, water chilling and grading. Right from the start, the line is highly automated. Incoming broilers are hung to the line and electrically stunned in a water bath. Next, the line makes a curve in the direction of Mecca and passes the killing station, where a manual halal kill cut is applied. This complies with the local market requirements, as 95% of the population in Senegal is Muslim. Defeathering
Products then go through the immersion scalder, followed by inline automated plucking. “We’re very happy with the Stork defeathering equipment. Now that we have adjusted temperature and settings, scalding and plucking work very well, leaving exactly the right amount of epidermis which is appreciated by our market,” says Khaly Sarr, Sedima Maintenance Director. Still hanging from the overhead conveyor line, products move to the evisceration department. After manual vent opening and vent cutting, evisceration is fully automated, which is the first of its kind in West Africa.

Nuova CoreTech
Stork Nuova is recognized worldwide as a leading eviscerating system. Sedima specifically opted for the Nuova CoreTech, a 20-unit version which doesn’t rehang the viscera pack into a separate shackle, but hangs it over the back of the broiler. Afterwards the giblets can be removed and processed manually. The CoreTech version of the Nuova eviscerator offers the option of moving up to a full-function Nuova without having to replace the complete machine.
Sedima’s automated overhead track process is monitored by Innova PDS production control and information software, which collects all relevant product data to control production and provide dashboards. Grading
After being chilled off-line in a screw chiller, products are manually hung to the distribution/selection line. Whole products are graded, based on three criteria: weight, flock quality and human visual inspection. A-graded whole products find their way directly to the market, whereas all other products are cut up manually.

Up and Running
Sedima was looking for world-class processing standards and end product quality. The decision to opt for Marel was the result of this quest. Mrs. Anta Babacar Ngom, Sedima General Manager, says, “We are very pleased to have Marel Poultry as our main supplier. Their experienced people supported us right from the very first plans for our factory. Now that everything is up and running, it’s good to see that the equipment Marel Poultry has installed is working really well. We also highly appreciate the training courses, such as the Innova PDS course, given to our personnel.”

Progressive Entrepreneur
Sedima, a vertical integration, was founded in 1976 by its current President, Mr. Babacar Ngom and is the largest privately owned agricultural company in Senegal. It covers all activities in the poultry production chain including hatcheries, breeding farms, a feed mill and a food processing factory. It is also the market leader in egg production with its own layer farms.
Sedima is a modern and progressive entrepreneur with a strong drive and a clear philosophy, qualifying it as a unique company in Africa. Hygiene, security, environment, qualified personnel, procedures and infrastructure are highly rated and respected.
Sedima is an effective and efficient organization, turning the poultry sector into one of the most promising industries for reducing poverty and stimulating growth in Senegal. Mrs. Anta Babacar Ngom says, “We are changing the way of thinking about poultry processing in West-Africa and are showing how automation can play a role in this.”
Sedima is still growing and the export of poultry products to neighboring countries Mauritania, Gambia and Mali ranks highly among its priorities. Besides, the Senegalese home market, with its population of 15 million, also offers great potential.

An Opportunity For Poultry
Poultry meat consumption in Senegal is growing steadily; supermarkets and food chains are gaining ground, which will certainly boost the poultry industry. Sedima is seizing this opportunity to start up its brand new poultry processing plant in Dakar, which is prepared for future challenges.