Chicken meat dominated poultry meat production in the MEA region in 2020, sharing 96.5% in the overall production (Table 1). The other meat types reached only comparatively small volumes. While Egypt ranked in first place in duck and goose meat production, Israel and Turkey together produced over 80% of the turkey meat. Because of the dominance of chicken meat, the following analysis will focus on this meat type. 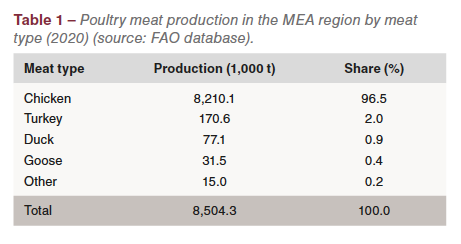 In 2020, the 17 MEA countries produced 8.2 mill. t of chicken meat (mainly broiler meat). The ten leading countries 98.1%. Figure 1 documents the high regional concentration. Iran and Turkey together contributed 53.0% to the total production volume, the four leading countries 80.3%. The ranking of the three leading countries reflects that of the population. Israel, only number 9 regarding population, ranks in fifth place. The country obviously tries to be self-sufficient and to meet the demand by domestic production because of its political and economic isolation. Israel had the highest per capita poultry meat consumption with over 60 kg/year worldwide in 2020. 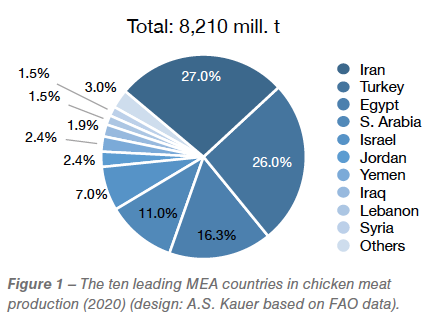 With the exception of Turkey and Iran, the MEA countries were not able to meet the growing demand by domestic production. Figure 2 reveals the exceptional role of Turkey. The country shared 75.4% in the overall export volume; Iran contributed 7.2%. The United Arab Emirates, Saudi Arabia and Oman exported some of their imports to adjacent Islamic countries as the detailed analysis of the trade flows will document. It is worth noting that Turkey not only ranked in first place in poultry meat but also in egg exports. Over the past two decades, a highly efficient poultry industry has developed in this country, which has been able to gain a strong position in the global trade with these two items. If it will be able to maintain this position, will depend on the future economic development and the devaluation of the Turkish Lira. 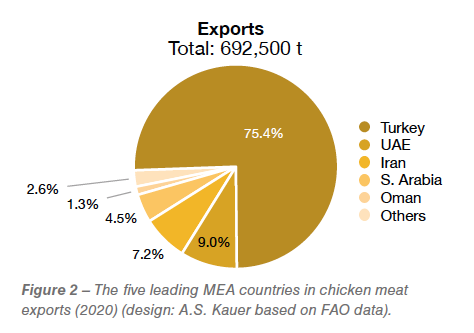 As expected, the regional concentration in chicken meat imports was lower than in exports as most of the MEA countries had to import to meet the continuously increasing demand. Nevertheless, the concentration was remarkably high. The three leading countries together shared over two thirds in the overall imports of the region (Figure 3). 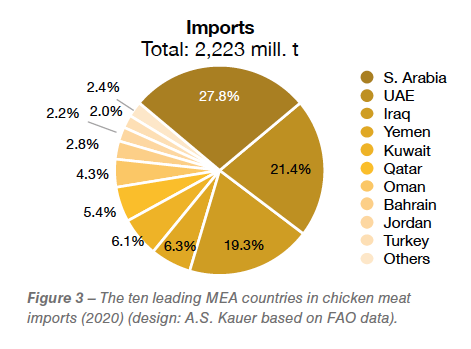 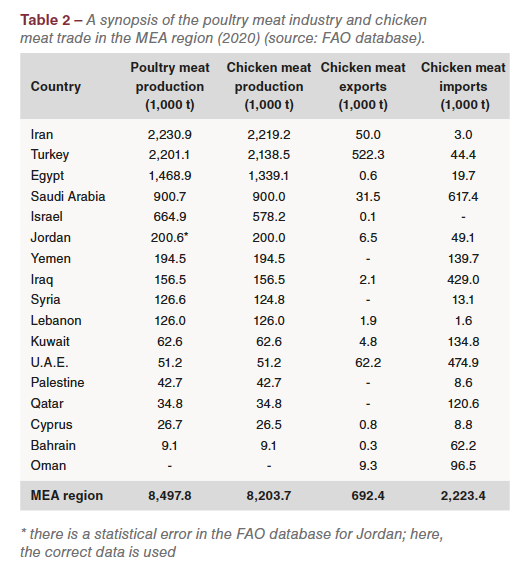 For selected countries, patterns of chicken meat exports and imports will be analysed.

In 2020, Turkey ranked in fifth place among the leading chicken meat exporting countries with a share of 3.6% in the global export volume. Chicken meat was exported to 100 countries; the regional concentration was however very high as Figure 4 documents. With a share of 53.8%, Iraq was the leading country of destination, followed by Hong Kong, Libya and Congo. The composition and ranking of the countries reflects the possibility to deep freeze chicken meat and, in contrast to shell eggs, to transport it over long distances. 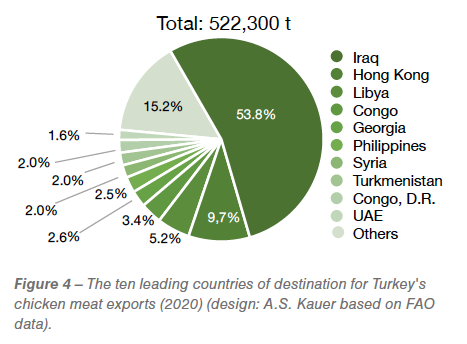 The United Arab Emirates ranked in second place regarding chicken meat exports by MEA region countries (Table 2). The domestic production was only as high as 52,200 t. To meet the demand of the population, almost 475,000 t of chicken meat were imported, so that 527,200 t were available for consumption. Obviously, an oversupply occurred, which resulted in an export of 62,200 t to Yemen, Saudi Arabia and Kuwait.

Table 2 documents that in 2020 the import volume was about 1.5 mill. t higher than the export volume. The spatial patterns of the imports will be analysed in detail for selected countries to document similarities and differences. Saudi Arabia and the United Arab Emirates together imported almost 1.1 mill. t of chicken meat in 2020. Figure 5 shows the remarkably high concentration of Saudi Arabia’s imports. 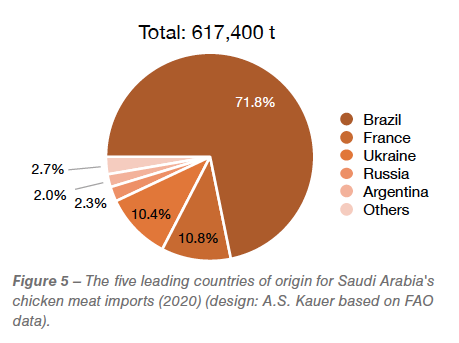 The five leading countries of origin contributed 97.3% to the overall imports, Brazil alone 71.8%. The extraordinary role of Brazil is not surprising as it is the leading chicken meat exporting country. It is surprising, however, that the USA did not export similar quantities to Saudi Arabia. One reason may be the aftermath of the Avian Influenza outbreaks in the USA in 2015, which stopped exports to over 30 countries. Another reason is that the consumers on the Arab Peninsula prefer whole broilers with an average weight between 0.8 and 1 kg as a meal. While Brazil and France offer this product, the USA mainly exported cut up parts, which are not very attractive for the consumers (Windhorst 2019, 2021).

The import pattern of the United Arab Emirates is almost identical with that of Saudi Arabia. The only difference is the higher contribution of the USA (Figure 6). The composition of the population in the Emirates differs considerably from that of Saudi Arabia. The percentage of non-Arabic inhabitants is remarkably high. Leading international companies and banks have their headquarters or branches in Dubai and Abu Dhabi. In addition, tourism plays an important role, attracting visitors from all over the world. High-class hotels and restaurants adapt to this situation and offer poultry meals, which are similar to those in Europe or North America. Cut up parts are the basis for these meals. 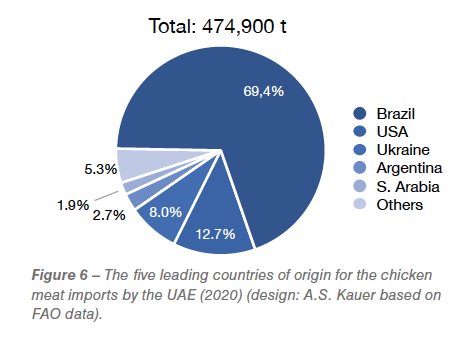 A comparison of the trade flows in poultry meat imports reveals that Brazil was the leading country of origin for all countries on the Arab Peninsula. The USA, number two in global broiler meat exports, gained higher market shares only in the United Arab Emirates, which, based on the specific composition of the population and its international economic relations, imported considerable amounts of cut up parts to meet the consumer demand.

The preceding paper could document that poultry meat production and trade play an important role in the MEA region. The lack of religious barriers makes poultry meat the most attractive meat type in nutrition. The regional concentration in production as well as in trade was very high. In chicken meat production (almost only broiler meat), the four leading countries shared over 80% in the production volume in 2020. Iran and Turkey produced over two mill. t each. With the exception of Turkey and Iran, all other MEA countries had to import chicken meat to meet the growing demand. Brazil was the leading country of origin for the imports of all countries. The USA could gain higher market shares only in the United Arab Emirates. The growing population and a higher purchasing power will result in a constantly increasing demand. As the expansion of poultry meat production in the MEA region is limited, chicken meat imports will increase. If and when cell cultured broiler meat will gain higher market shares is a still open question despite the remarkable development in Israel and initiatives in Qatar.

Patterns and dynamics of egg trade: trade flows in exports and imports at country level