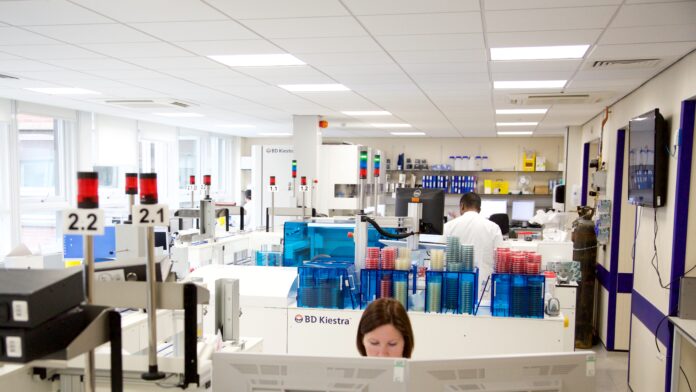 Mycoplasma synoviae is one of the most common preconditions for secondary bacterial infections in poultry. It causes subclinical infections of the upper respiratory tract, which can develop into systemic infections and result in reduced and poor-quality egg production.

In such cases, Gallibacterium anatis as an opportunistic pathogen often causes clinical infections characterized by depression, diarrhea, respiratory syndrome and decreased egg production. The aim of this study was to determine possible correlation in the prevalence of G. anatis and M. synoviae, as well as mutual correlation of their quantity. The research was done on sixteen layer flocks from eight different farms. The tracheal swab samples were analyzed using qPCR assay. The results showed statistically significant correlation in the analyzed samples regarding the prevalence of both pathogens on the farms, with significantly higher average levels of G. anatis compared to M. synoviae. No correlation regarding quantity of each pathogen was detected.

Infections caused by Gallibacterium anatis (G. anatis) and Mycoplasma synoviae (M. synoviae) can lead to great economic losses in the poultry production. M. synoviae is one of the most common preconditions for secondary infections, while G. anatis easily spreads from the upper to lower parts of the respiratory system or ascendingly through the oviduct to the coelomic cavity, and causes severe infections.

G. anatis is an opportunistic pathogen that can cause clinical infections characterized by depression, diarrhea, respiratory syndrome and decreased egg production. However, the infection is frequently subclinical and easily overlooked. There are many predisposing factors such as impaired immunity, hormonal status, stress, poor zoohygienic conditions and coinfections, which can lead to systemic infections and high mortality rates. The morbidity and mortality rates vary in naturally infected animals, while in experimentally infected immunosuppressed layers the mortality can increase up to 73%. Due to inadequacy of the conventional diagnostic methods for detection of G. anatis, the pathogen is often difficult to isolate and therefore misdiagnosed. Consequently, a highly specific, sensitive and reproducible qPCR method was developed, which was also used in this study in order to identify and quantify the pathogen.

M. synoviae causes subclinical infection of the upper respiratory tract, which can lead to secondary respiratory and systemic infections. It can also cause decreased egg quality and production, as well as lameness and severe arthritis. M. synoviae strains have tropism for different tissues, but the synergism between arthrotropic and salpingotropic strains and other respiratory pathogens has been documented in several studies. As opposed to the respiratory and arthropathic forms, the last 20 years strains with oviduct tropism, which are associated with egg deformities, have been increasingly detected. Respiratory form of the disease can be characterized by rales, but is most commonly asymptomatic. Morbidity in chicken flocks varies between 2 and 75%, while mortality is usually less than 1%, which consequently results in high condemnations, decreased weight gains and feed efficiency. Commercial ELISA assays are often used for routine flock monitoring, while the identification is done using different PCR-based methods.

Both bacteria are most commonly located in the upper respiratory system and frequently cause subclinical infections, therefore the aim of this study was to determine their prevalence, as well as mutual correlation of their quantity in the studied laying hen flocks.

In this study, sixteen flocks from eight laying hen farms were investigated. The age of the flocks varied from 8 to 66 weeks of age (Table 1). Five tracheal swabs per flock were sampled and stored at -20 °C until the DNA isolation. DNA was isolated from every sample individually using the GenElute Mammalian Genomic DNA Miniprep Kit (Sigma-Aldrich, Co., St Louis, MO, USA) according to the manufacturer’s instructions. Isolated DNA was stored at -20 °C until further analysis.

Quantification of the bacteria was done using GoTaq Probe qPCR Master Mix (Promega, Madison, WI, USA). Used primers and probes were specific for G. anatis (gyrB: F-5’-CGATTGTGTCCGTTAAAGTGC, R-5’-TGCAAACGCTCACACCAACTG, P-5’-FAM-CTGGTTTCTTCCGAAGTGAAAAGTGTAGTGGA-BHQ1) and M. synoviae (16S-23S rDNA ISR: F-5’-CTAAATACAATAGCCCAAGGCAA, R-5’-CCTCCTTTCTTACGGAGTACA, P-5’-FAM-AGCGATACACAACCGCTTTTAGAAT-BHQ1). Quantification protocols were performed as described by Wang et al. (2016), and Raviv and Kleven (2008). The total volume of the reaction mixture was 15 µL. Each sample was analyzed in duplicate, while G. anatis and M. synoviae samples of known concentration were performed in triplicate in parallel for the purpose of absolute quantification. The analyses were carried out using Mx3005P instrument (Stratagene, USA).

The statistical analyses were done in Statistica 13.5.0.17. (TIBCO Software Inc.) software. The normal distribution was tested using Kolmogorov-Smirnov test, and the average number of genome copies was tested using Mann-Whitney U test. Correlation between the pathogen copy number and the correlation between the prevalence of both pathogens on each farm were analyzed using correlation matrices. Statistical significance was set at level p<0.05.

Both pathogens were detected in the majority of the studied flocks, with the exception of Flock 11 (Farm E) and Flock 15 (Farm H) where M. synoviae was not detected, and Flock 8 (Farm C) where none of the pathogens was detected, possibly because of the young age of the flock (Table 1). The results showed higher mean copy numbers per sample for G. anatis, in most cases (Table 1), and a significantly higher average copy number of G. anatis on all farms (data not shown). There was no correlation between the pathogens in regard to the quantity of bacteria per swab (Figure 1A). However, results showed statistically significant correlation (p = 0.032) in the prevalence of G. anatis and M. synoviae (Figure 1B). 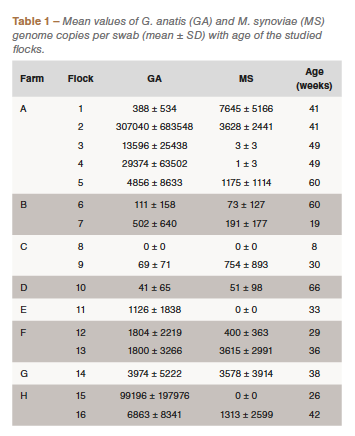 The objective of this study was to determine the possible correlation in the prevalence of G. anatis and M. synoviae, and mutual correlation of their quantity in the tracheal swabs of laying hens. Both bacteria colonize the respiratory system, which can result in clinical infections with high production losses. Several studies have shown that coinfections with M. synoviae lead to severe clinical symptoms, although no correlation has been detected between M. synoviae and G. anatis to date.

Results of this study showed statistically significant correlation (p=0.032) in the prevalence of G. anatis and M. synoviae (Figure 1B), which confirms the possible link between the studied pathogens. G. anatis was detected in almost all flocks and showed higher titers per sample than M. synoviae, in most cases (Table 1), which is in favor of the fact that G. anatis is a commensal microorganism in the upper respiratory system where it can be found in a high amount without causing a clinical infection. There was no correlation between the quantities of the pathogens in the samples. To our knowledge, there were no clinical manifestations of infections at the time of sampling on any of the studied farms. 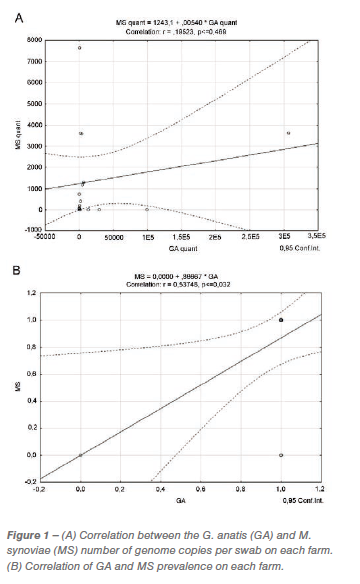 Immunoprophylaxis is one of the most important technological measures in the prevention of poultry diseases. Live attenuated M. synoviae vaccine showed high efficacy in the prevention of the clinical infections and elimination of the wild strains on farms. On the other hand, G. anatis strains are characterized by high genetic variability, which complicates the production of a universal commercial vaccine, although different immunogens are being investigated as possible vaccine candidates. The results of this study showed a high prevalence of both G. anatis and M. synoviae, and confirmed the need for regular monitoring on poultry farms. Since M. synoviae most frequently causes subclinical infections, the pathogen is often longitudinally spread through the flocks within a farm, which leads to economic losses. Implementation of the adequate methods for early detection and control of the bacterial pathogens on poultry farms can lead to better prevention of the diseases, which will result in healthier flocks and improved production rates.

The authors would like to thank the farmers for their cooperation regarding sampling.
References are available on request
From the Proceedings of the 70th Western Conference Disease Conference 2021