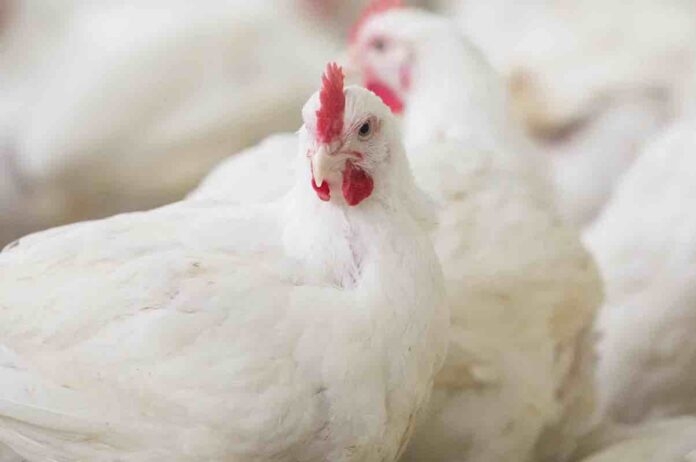 Immune modulators such as beta glucans have today a major role in poultry production.

The poultry production industry has seen astonishing improvements over the past several decades as evidenced by increased growth rates and improved feed conversion efficiency. We can now produce bigger and faster growing birds with far less feed than imagined even 20 years ago. These improvements can be attributed to a combination of genetics, nutrition, farm management and disease management. Genetics ultimately limit the maximum potential growth performance of the birds, while nutrition, farm management and disease management can each impact how close to the genetic potential the birds can achieve on a given farm. This paper addresses the rapidly evolving field of disease management and the new tools that producers can use to improve the health and thus performance of their animals.

Antibiotics and specifically antibiotic growth promoters (antibiotics used prophylactically for disease prevention and modest growth enhancement) have made a significant contribution to some of the performance gains in recent decades. While the exact mode of action of these drugs is still not completely understood, the potential impacts on promoting antibiotic resistance is becoming more apparent and thus their usage is being phased out across many regions of the world. As some of these antibiotics are being removed from the market, producers are now taking a more comprehensive approach to disease management including improved biosecurity at the farm, expanded vaccination programs and inclusion of feed additives that improve gut health and immunity. This last group of products, loosely called immune modulators, include probiotics, peptides, and various carbohydrate molecules that interact with the animal’s immune system to help it fight infections and/or manage inflammation caused by infections.

Beta glucans, and specifically, beta-1,3-glucan, are polysaccharides that are widely recognized as potent immune modulators (Barsanti et al., 2011). When animals are exposed to beta glucans either orally, through the skin or even intravenously, the immune system detects the specific pattern of glucose monomers connected through beta-1,3 linkages (Figure 1) as a pathogen associated molecular pattern (PAMP), which triggers a cascade of immune system responses. Evolutionarily, this makes sense because many pathogenic organisms including fungi, yeasts and bacteria have beta-1,3-glucan incorporated into their cell walls/membranes.

Researchers have taken advantage of this known immune response to beta glucans by attempting to “prime” the immune system of animals before challenging them with a specific pathogen, disease, and/or stressful environmental condition. Notable positive results in poultry studies include:

A complicating aspect of the prior art is that beta glucans are a ubiquitous class of molecules produced by a wide array of organisms ranging from bacteria, yeast, fungi, seaweeds, plants and algae. Each class of organisms produces vastly different forms of beta glucan with different linkage patterns (e.g. linear beta-1,3 linkages with or without beta-1,6 side branches, Figure 1). Furthermore, commercially-available beta glucans range in purity from a few percent up to over 95% purity. Most of the research on beta glucans in animals has been conducted with yeast beta glucans, which have been commercially available for over a decade. However, most of these products are still a mixture of beta glucans and other yeast cell wall components so it is difficult to parse out the effects of the beta glucan alone. 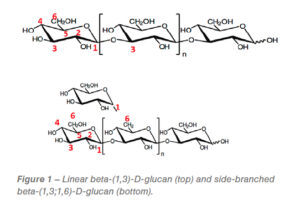 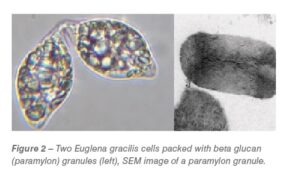 Paramylon appears to modulate the innate (cellular) immune system of animals in the same fashion as other forms of beta glucan containing linear beta-1,3-glucan as reviewed extensively by Chan et al. (2009) and Barsanti et al. (2011) (Figure 3). 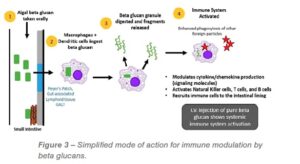 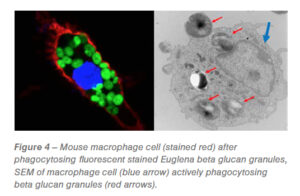 These immune cells then start to “prime” the immune system by releasing both pro and anti-inflammatory cytokines (Figure 5) as well as chemokines that help recruit more immune cells to the gut (Figure 6). After priming, many facets of the innate immune response are enhanced including increased natural killer cell activity, foreign particle phagocytosis rates and oxidative burst potential. As a result, with the innate immune system “primed” the animal should be better prepared for fighting potential pathogen infections. 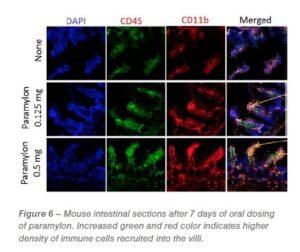 Birds on a farm are exposed to a nearly constant threat of disease from a wide range of viral, bacterial, fungal and parasitic organisms. Biosecurity is a key strategy for reducing some of the disease pressure but it is not a fail-safe system. Vaccines are also a great strategy for controlling many common diseases, but we still do not have vaccines for many of the remaining commercially-important diseases, especially many bacterial diseases. Antibiotics can also be highly effective for controlling an outbreak but there is a global shift away from using antibiotics prophylactically. Therefore, immune modulators like beta glucan, that prop up an animal’s own innate immune system, can be an important tool for helping to manage disease, especially for very young birds that do not have a fully-matured immune system and during times of immune suppression caused by environmental stresses (e.g. heat, cold, ammonia) or biological stress (e.g. live vaccines).

Levine et al. (2018) conducted a series of experiments to test whether dosing Euglena beta glucan into the diets of broilers could help mitigate the effects of a severe coccidiosis challenge. Briefly birds received diets that were amended with a range of euglena beta glucan levels (25-100 ppm). On day 14, the birds were challenged with an oral gavage containing a mixture of three Eimeria species (E. acervulina, E. maxima and E. tenella) which are known to cause coccidiosis in broilers. Lesion scores were assessed on day 20 in addition to gut immune histology and performance metrics (growth rate, feed conversion, mortality).

In the first experiment, the birds that received feeds supplemented with beta glucan showed a significant increase in immune cell density in the gut, which was also correlated with reduced lesion scores. This is a particularly interesting finding since it is known that the Eimeria parasite can actually trick the host into perceiving that there is no infection and thus reduce immune cell density in the gut which allows secondary infections to take hold. In the second experiment, the beta glucan treated birds showed significantly improved feed conversion efficiency during the challenge period (day 14-20). Together, these results suggest that modulating the bird’s own immune system can have a drastic impact on a commercially-important gut health disease like coccidiosis.

Since birds are exposed to many potential pathogens simultaneously, we tested whether using a beta glucan immune modulator could reduce the impacts of a severe, multi-pathogen stressor on broilers in a 42-day pen trial. Briefly, the birds were fed a control diet (antibiotic free), or the control diet amended with 50 ppm of Euglena beta glucan for either the first 28 days or over the full 42 days of the trial. On day five, all of the birds were challenged by introducing untreated dirty litter into the pens from the last production cycle which contained E. coli, Clostridium and Eimeria spp. In both of the beta glucan treated groups, the birds had significantly improved growth rates and feed conversion efficiencies (Figure 7), presumably because the birds were able to fight the infections more efficaciously when primed with the treated feeds. 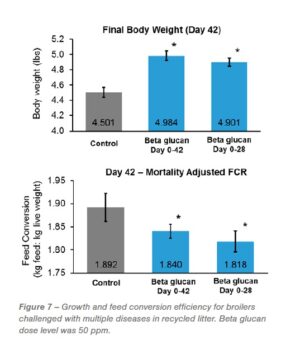 The fact that the birds given beta glucan for only the first 28 days performed similarly to the birds dosed for the full term of the trial suggests that, in this case, there was no extra benefit to continued usage of the immune modulator during the final two weeks.

Beta glucans and other immune modulators have begun to show promise as another useful tool for livestock producers to improve the health of their flock. While we are still in the early stages of fully understanding how to best use immune modulators like beta glucans, there are a few general patterns developing: