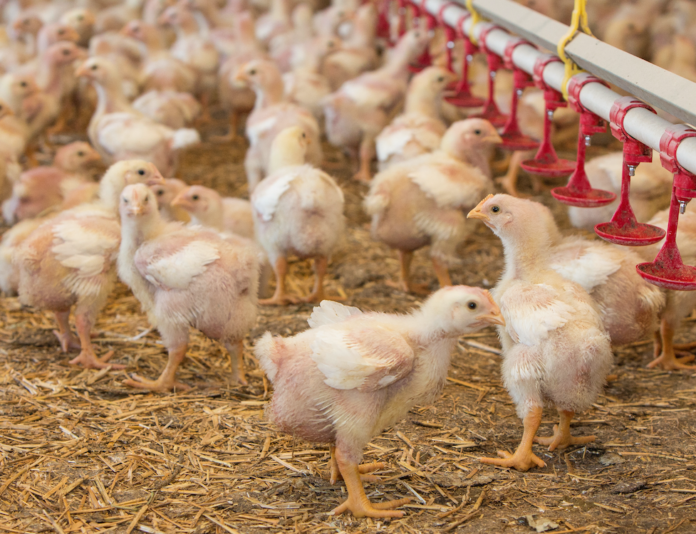 The level of ammonia young chicks will be exposed to during the first week of their lives is determined to a large extent by what was done to the litter between the flocks.

Towards the end of a flock the birds are adding thousands of gallons of water to a house each day. During cold weather, reduced ventilation rates, in attempt to keep heating costs to a minimum, can result in a large percentage the moisture remaining in the litter. The most prevalent location for moisture build-up in litter is near a house’s drinker lines. If fact, it is not uncommon at the end of the flock for the moisture content of the litter within a couple of feet of each drinker line to be 40% or greater.

After a flock leaves a house during cold weather, the temperature of the air in a house quickly drops. Though this fact may seem trivial, it can cause problems for the chicks that will be showing up in a couple of weeks. This is because both the evaporation of water and generation of ammonia from the litter are temperature-dependent. The colder the house becomes, the lower the amount of ammonia generated, and the lower the amount of moisture removed from the litter. In a sense, the colder a house becomes, the deeper the litter tends to go into a state of hibernation. If heat is added to a house a week or so later, it can seem like the birds just left. The ammonia generation process starts back up and the ammonia levels rapidly increase. As a result, one of the keys to keeping ammonia levels to a minimum at the beginning of a flock is to remove as much of the ammonia-producing cake from a house as possible and then work on drying the litter that remains. The sooner the cake is removed, the more time you have to dry the remaining litter and the easier it will be to control the ammonia at the beginning of the next flock.

Delaying the removal of cake from a house for a few days after the birds leave effectively reduces a house’s downtime a few days because little drying of the cake and the litter beneath the cake will occur. Figure 1 shows the average litter moisture taken from multiple locations near the drinker lines from three broiler houses on the same farm. The day after the birds left the litter moisture was 45%. Over the next seven days there was no significant decrease in the moisture level of the caked litter near the drinker lines.

Though the moisture content of the litter under the cake was not measured, it would be highly doubtful if there would have been any change due the fact that the moisture content of the caked litter above it didn’t change. In this case, since the houses were not decaked for roughly seven days after the end of the flock, from a litter-drying standpoint the 21-day downtime became a 14-day downtime.

To help assure chicks will not be exposed to excessive ammonia during brooding, caked litter should be removed soon after the previous flock’s departure, then house should be closed up and ventilated in a manner similar to that if there were birds present. Minimum ventilation fans should be controlled by a timer.

Ideally, the average house relative humidity would be kept below 70%. If daytime temperatures are moderate (+50 °F) minimum ventilation fans should be operated continuously. If excess litter moisture is not removed from the house then little moisture will be removed from the litter and the ammonia generation rate at the beginning of the next flock is more likely to overwhelm any ammonia-control product applied. In addition, if a house is not ventilated properly between flocks, excessive humidity/condensation and high ammonia levels can end up damaging a poultry house’s structure and equipment.

In the end the goal quite simple: don’t let the moisture and the cake from a previous flock adversely affect the current flock’s performance and health.

From the Proceedings of the Midwest Poultry Federation Convention 2022