Though there is a wide range of opinions on the optimal drinking water temperature for young chicks, the fact is farm managers actually have a very limited ability to control the temperature of the water their chicks are drinking because, for all practical purposes, it is determined by house air temperature.

Since the water in a drinker line is almost stationary, and drinker lines are not insulated, the water doesn’t have to travel far before it warms up, or in some rare cases cools down, to room temperature. Typically within 40′ to 60′ of entering a drinker line.

Figure 1 illustrates water temperatures along the length of a 230′ drinker line during the first week of a wintertime flock in a 40′ X 500′ broiler house. The temperature of the water entering the house’s control room from the ground was approximately 55° F. During the 30′ trip from control room to the first nipple on the drinker line, the water warmed from 55° F to between 70° F and 80° F, depending on house air temperature at the time. By the time the water reached the nipples 64′ from the beginning of the drinker line, it had warmed to essentially air temperature. Previously conducted farm studies in which the incoming water temperate was in the high forties or low sixties documented a similar trend. 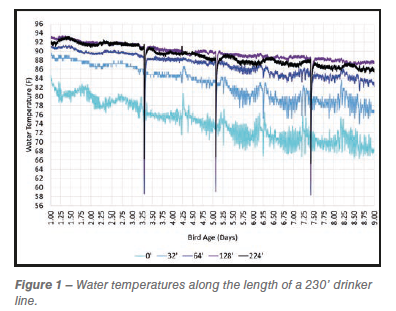 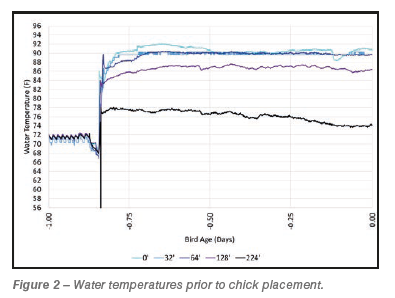 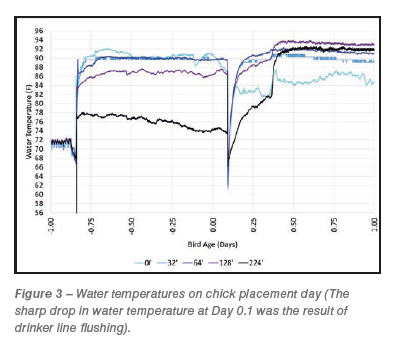 The relatively quick recovery of water temperatures after flushing illustrates that even if the drinker lines are filled within 30 minutes of chick arrival, the water will achieve room temperature by the time the chicks take their first drink. In addition, if water lines are periodically flushed during brooding to assure water freshness/cleanliness, the accompanying short-lived decrease in water temperature would not likely adversely affect young chicks.

The fact that the water within a drinker line is essentially stationary during brooding and drinker lines are not insulated also means that flushing water lines has a very short-lived effect on temperature of the water the birds are drinking. The instrumented drinker line was flushed for five minutes on Days 0, 3, 5, and 7.