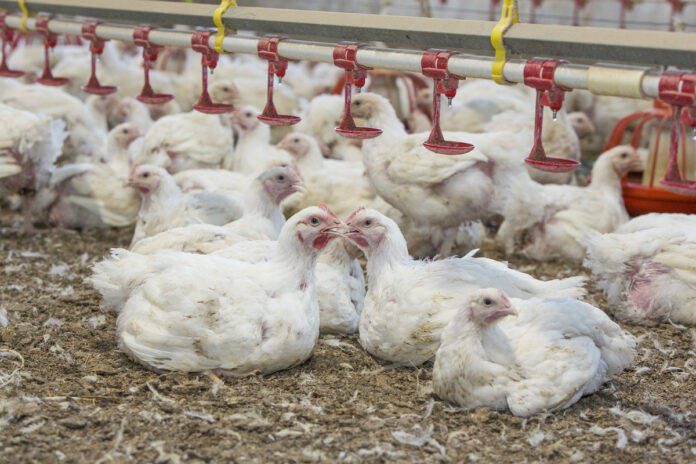 The inclusion of 175 g/kg fishmeal, essentially at the expense of soybean meal, in sorghum-based broiler diets was shown to improve weight gain by 12.1% (1260 versus 1124; P<0.001) and feed conversion ratio by 8.13% (1.299 versus 1.414; P<0.001) from 15 to 28 days post-hatch. The dietary treatments had an average crude protein (CP) content of 222 g/kg in this study. Slowly digestible starch has been shown to advantage broiler performance and the digestion rate of sorghum starch is very considerably slower than wheat starch under in vitro conditions. Differences in starch digestion rates across various feed grains are probably not as pronounced in broiler chickens; nevertheless, starch digestion rates in broiler chickens offered wheat-based diets have been shown to be 56.0% more rapid (0.117 versus 0.075 min-1; P<0.025) than their sorghum-based counterparts where a number of feed grains were compared. There is real interest in the development of reduced-CP for broiler chickens as their adoption would promote sustainable chicken-meat production. Interestingly, the partial replacement of soybean meal with alternative rapidly digestible sources of amino acids, namely whey protein and non-bound (crystalline, synthetic) amino acids, in wheat-based diets have been shown to enhance broiler performance. This, and similar outcomes, emphasise the potential of starch and protein digestive dynamics to manipulate the growth performance of broiler chickens to advantage. Therefore, the objective of the present study was to assess the impacts of fishmeal and sorghum inclusions in diets based on wheat and soybean meal with three dietary CP levels via a Box-Behknen response surface design. The three dietary CP levels were 190, 210 and 230 g/kg, fishmeal was included at 0, 50 and 100 g/kg essentially at the expense of soybean meal and sorghum was included at 0, 150, and 300 g/kg at the expense of wheat.

This feeding study was conducted in compliance with the guidelines of the Animal Ethics Committee of The University of Sydney. A total of 390 off-sex 14-days old male broilers (Ross 308) were randomly distributed into 65 battery cages each of 6 birds (13 treatments × 5 replicates). The cumulative variance of average body weights was maintained at 1.02% between cages. Fishmeal (CP=600 g/kg, Menhaden) and sorghum served as alternative protein and starch sources, respectively, under three dietary protein regimes. The Box-Behnken design comprises three factors at three levels (Table 1).

Thirteen diets based on wheat and soybean meal were formulated to have the same digestible lysine (10 g/kg) and metabolizable energy (13.0 MJ/kg). The diets were cold-pelleted and contained xylanase but not phytase. Dietary compositions and nutrient specifications are shown in Table 2. Birds were offered the same wheat-soybean meal based commercial starter diet (with coccistat, xylanase and phytase) from day 1 to 13 post-hatch and weight gains, feed intakes and FCRs were determined from 14 to 35 days post-hatch. The R 3.5.3 software program was used to plot the surface responses of growth performance parameters, which were fitted by predicted models only with significant terms. JMP Pro 14 was used to perform analyses of variance and to establish correlations when relevant and a 5% probability level was deemed to be significant. 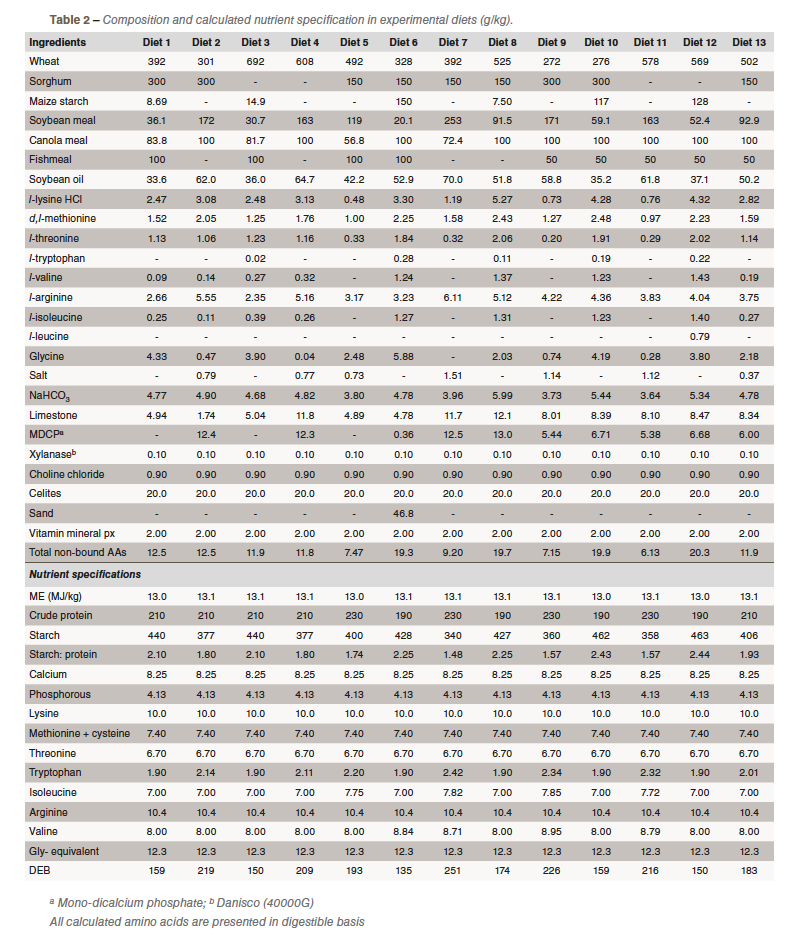 The summary of growth performance results is shown in Table 3 and the mortality rate was only 1.28% during the experimental period. Overall performance is comparable to 2019 Ross 308 male performance objectives for weight gain (1912 versus 1849 g/bird) and feed intake (3058 versus 2921 g/bird) and approached the FCR objective (1.601 versus 1.580). 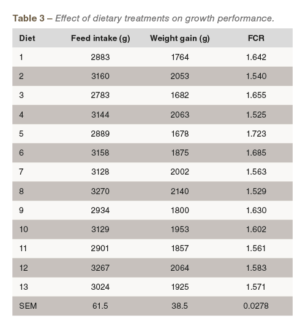 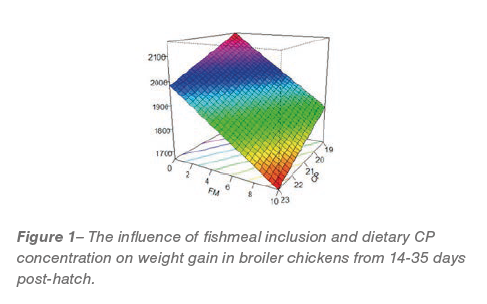 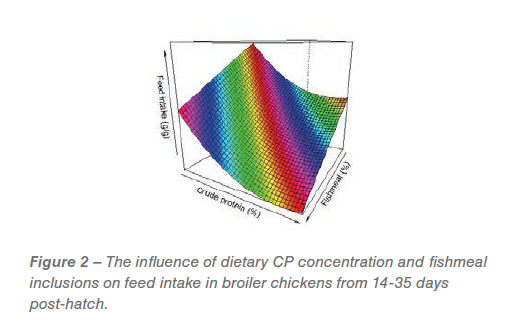 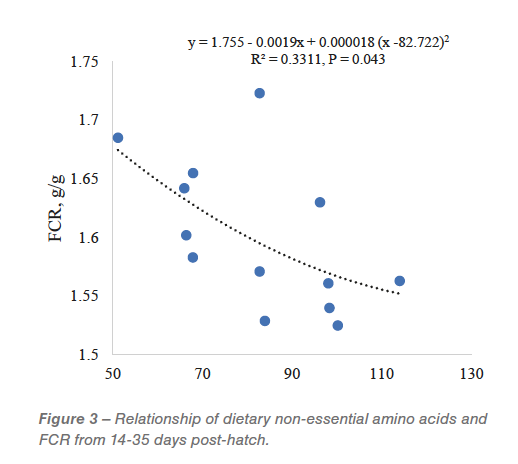 Sorghum inclusions did not influence broiler growth performance; thus, the hypothesis that slowly digestible sorghum starch would improve growth performance was not established. The negative impact of fishmeal on broiler growth performance conflicts with the Sydenham et al. (2017) findings; however, there were very real differences in the basal diets between the two studies such as CP levels, types of feed grain and non-bound amino acid inclusion. In addition, the quality of fishmeal can vary as a result of the rendering process. Interestingly, based on specified values, fishmeal inclusions reduced dietary concentrations of proline, alanine, aspartic acid, glutamic acid and serine in diets. Therefore, it appears that fishmeal inclusions may have triggered deficiencies in certain non-essential amino acids.