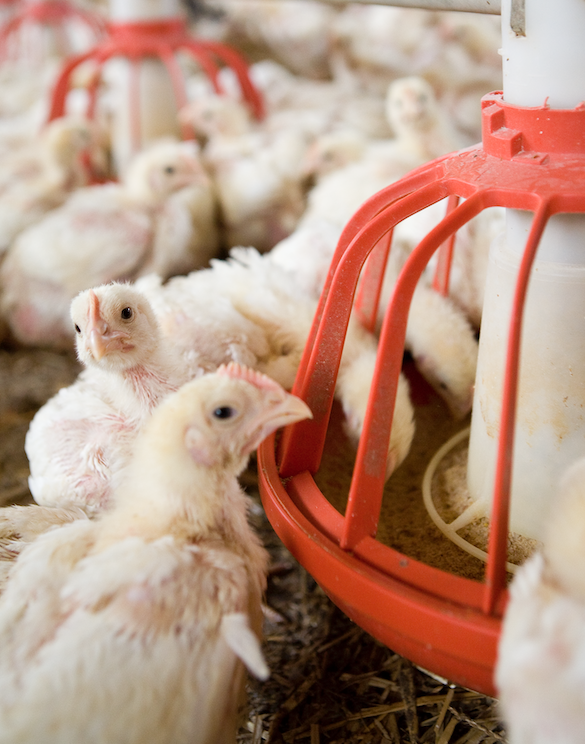 Non-starch polysaccharides (NSP), particularly arabinoxylans (AX), with complex biochemical structures are one of the main causative factors for impaired growth performance and poor gut health in broilers. Use of multi-xylanase systems, that target both the xylose backbone and short side chains attached to xylan, can synergistically improve the digestibility of AX-rich plant-derived feed raw materials.

In this review, we demonstrated that a multi-enzyme system, containing mainly xylanase and arabinofuranosidase, can be used to improve digestibility of feed ingredients, with resulting impact on growth performance and key gut health indicators in broilers.

NSP is one of the key anti-nutritional factors in monogastric animal diets. NSP are present at high levels in both corn and wheat, as well as in plant-based crude protein sources, such as soybean meal and corn distillers dried grains with solubles (DDGS). NSP polymers are categorized as cellulose, hemi-cellulose (AX and beta-glucans) and pectin, which are mainly present in the cell walls of the endosperm and in the bran. AX, which is the predominant NSP, varies in level and biochemical structure between different plant-based feed raw materials. AX consists of a linear backbone of β-(1-4)-xylopyranosyl units (X) that are substituted with short side chains, including L-arabinose (A), ferulic acid, and Oacetyl. AX cannot be readily digested in the small intestine of monogastric animals, resulting in viscous chyme, dilution of nutrients and physical barriers in the gastrointestinal tract. The consequence of this is impaired growth performance and gut health problems, such as proliferation of pathogenic bacteria, intestinal inflammation, weakened intestinal barrier function, and intestinal lesions.

Supplementation of AX-degrading enzymes in feed mitigates the adverse effects of AX. Given the complex structure of AX, it is possible that it may be advantageous to use a multi-xylanase system, instead of just single xylanase, in an effort to target both the xylose backbone (such as endo- 1,4-b-xylanase, Xyl) and the short side chains (such as arabinofuranosidase, Abf). It is predicted that this will deliver significant improvements in feed digestibility, resulting in enhanced animal performance and gut health status in broilers. To examine this hypothesis, both in vitro and in vivo models were used to assess the efficacy of multi- enzyme preparation Rovabio (MEP, Adisseo), as well as Xyl and Abf singly or in combination.

A – In vitro trial

Enzyme preparations of Xyl (GH11 family) and Abf (GH51) were isolated from Talaromyces versatilis and expressed in Pichia pastoris. These enzymes were evaluated for their efficacy to digest both corn and wheat flours individually and in combination (Xyl; Abf; Xyl+Abf).

The in vitro incubation method used in this study was the NSP analysis procedure described by Boisen and Fernandez (1997) with exclusion of the third step. The method is a multi-enzymatic hydrolytic process. The wheat/corn flour samples were incubated successively with 1) pepsin, pancreatin for 3h, and 2) with and without the exogenous enzyme (Xyl, Abf or Xyl+Abf) for 4h. The in vitro digestibility coefficient of dry matter (dig DM) was calculated for each incubation according to the calculation used in in vivo model: digDM = (feed DM−fecal DM)/feed DM where feed DM and fecal DM correspond to the dry matter weight in the feed and in the unhydrolyzed residue. Dinitrosalicylic acid (DNS) assay was conducted to measure the reducing ends released from the polysaccharides.

B – In vivo trial

The Rovabio MEP was produced by the fermentation of Talaromyces versatilis sp.nov. and provided in liquid form. It contained xylanase (5500 U/mL), glucanase (7500 U/mL) and arabinofuranosidase (23000 U/mL).

A total of 288 one-day-old Ross PM3 male broilers was divided into 3 groups of 96 animals, i.e. one non-supplemented control (NC) and 2 treatments comprising the two types of water-soluble wheat fractions (WF) at 0.1% on top of the basal diets, designated as positive control (PC) and MEP, respectively. Each treatment group comprised 8 pens of 12 animals. The same basal experimental wheat-based diet was given to all the birds during the entire trial (0-14d). Briefly, the WF supplemented in MEP group was incubated with Rovabio whilst in PC group the WF was untreated. The characterization of both WFs was shown in Table 1. The procedure to prepare the WFs was described in detail by Yacoubi et. al., (2017). Each treatment group was comprised of 8 pens of 12 animals. 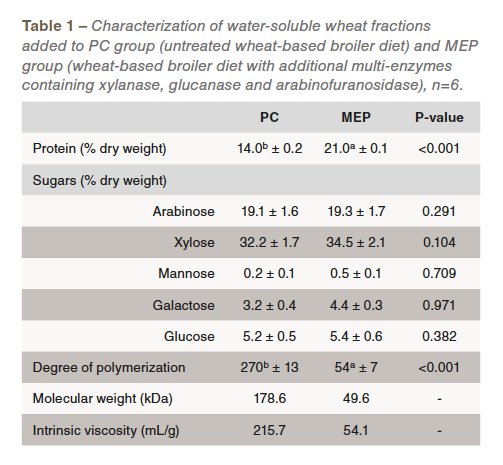 At d14, the animals were weighed individually and feed intake (FI) measured per pen, to calculate feed conversion ratio (FCR) and body weight gain (BWG). Three animals per pen, 24 animals per treatment, with average body weight were euthanised by CO2 asphyxiation. The caecum digesta content was weighed, immediately mixed with distilled water at a ratio of 2 mL/g and stored at −20 °C for SCFA and lactic acid analyses. Approximately 1cm of tissue from the distal end of the cecum and from the ileum at the Meckel’s diverticulum were collected immediately post euthanasia, placed in RNALater (Sigma-Aldrich, St, Louis, MO) and stored at −20 °C. To quantify the infiltration of T-lymphocytes (a sign of inflammation level) in the caecum and ileum, immunohistochemistry was performed as described previously by Van Immerseel et al. (2002), using a monoclonal antibody targeting CD3 (Dako, Glostrup, Denmark). A polyclonal rabbit antihuman GLP-2 antibody (Phoenix Pharmaceuticals, Inc., Burlingame, CA 94010. USA) was used to detect L-cells (lymphocytes) through immunohistochemical staining.

A – In vitro trial

The A/X ratios differed between the wheat (0.65) and corn (0.73), consistent with previous report by Bach Knudsen (2014). DM digestibility and DNS obtained either in the presence or absence of Xyl and Abf added, alone and in combination, are presented in Table 2. The highest DM digestibility and DNS values were observed when Abf alone, and Xyl and Abf together were fed in combination (P<0.001). It is therefore indicated that multi-xylanase system can significantly improve digestibility of feed raw materials, especially those with more complex AX biochemical structures, such as wheat. We also noticed that feeding Abf alone showed similar improvement as in the group treated with Xyl and Abf together. We hypothesized that it may due to the limited complexity of the in vitro model to show the further improvement from the combination of Xyl and Abf. The animal trial can be a better model to demonstrate the effect of multi-enzymes with effect on both xylose and its short side chains compared with single enzymes. 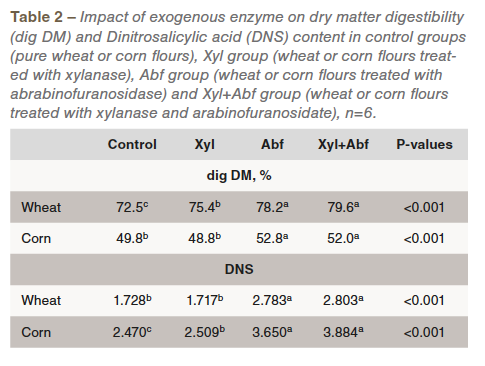 B – In vivo trial

As shown in Table 3, the addition of WF treated with MEP in the basal diet significantly increased feed intake and body weight gain. However, dietary treatment had no impact on FCR. 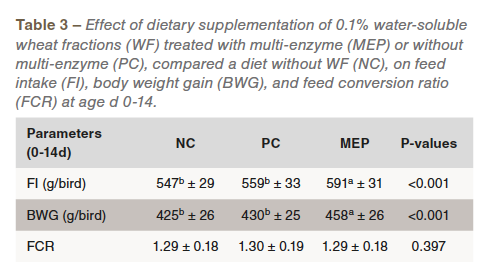 Chickens receiving the diet supplemented with MEP-treated WF presented higher density of L-cells in the ileal crypt and villus epithelium and lower infiltration of T-lymphocyte in the ileum and cecum compared with those fed the PC and NC treatment (Table 4). This result suggested that treating the WF with MEP resulted in a stronger intestinal barrier function in broilers, resulting in better growth performance as shown above.

Table 4 also illustrates that total SCFA, acetate and butyrate concentration in the ceca were significantly increased in the group fed the MEP- treated WF compared with those fed the NC and PC treatments (Table 4), likely due to greater abundance of oligosaccharides produced for beneficial bacteria to utilize to produce SCFAs.

The in vitro study showed that Xyl efficiency might be increased by Abf supplementation, to enhance the degradation of fibre-rich cell wall constituents in plant-derived feed raw materials. Consistent with the in vitro results, in the in vivo trial, treatment of water-soluble wheat fractions with MEP resulted in increased BWG of young broilers without affecting FCR. These effects may be attributed to enhanced immunity, and improved gut integrity due to increased SCFAs in the hindgut.