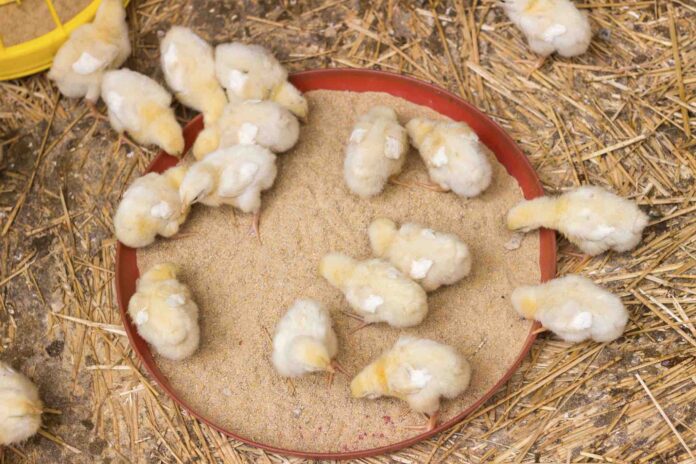 The three apical diets were blended at various ratios to generate a balance of seven experimental diets for the equilateral triangle design. These diets were offered to 360 off-sex male Ross 308 (parent line) broilers from 14 to 35 days post-hatch to determine growth performance. The response surface design demonstrated that maximum growth performance was achieved when birds were offered a diet containing a combination of 475 g/kg standard and 525 g/kg rapid protein digestion rates. The implications of these findings are here discussed.

The concept of “fast” and “slow” proteins in human nutrition was enunciated by Beaufrère et al. (2000) and consideration has been given to protein and starch digestive dynamics in poultry by Liu and Selle (2015). However, the digestion rate of protein has a greater bearing on broiler growth performance than that of starch. Thus, the objective of this experiment was to compare the effects of ten nutritionally equivalent diets with the same protein content (202.5 g/kg true protein) and similar amino acid profiles, but with different protein digestion rates, on broiler growth performance via an equilateral triangle response surface design. Such designs are based on three apical dietary treatments and their main protein components varied in order to generate different protein digestion rates. Soybean meal is the dominant protein source in practical broiler diets thus apical diet 1 was deemed to have a standard digestion rate in this feeding study. Whey protein is more rapidly digested than soy protein, so diet 3 was considered to have a rapid digestion rate. As unbound (crystalline or synthetic) amino acids do not require digestion they are rapidly absorbed; therefore, diet 2 was judged to have a very rapid digestion rate. The balance of seven dietary treatments are various blends of the apical diets with intermediate protein digestion rates.

The feeding study complied with specific guidelines approved by the Animal Ethics Committee of The University of Sydney. Three apical diets were formulated to contain different sources of protein sources; diet 1 was based on soybean meal with minimal inclusions of unbound amino acids, diet 2 included substantial levels of unbound amino acids and diet 3 contained rapidly digestible whey protein, as shown in Table 1. The three apical diets were formulated to identical true protein content energy density with very similar levels of digestible lysine, crude protein and ideal protein ratios. The remaining seven dietary treatments were derived by blending the apical diets at various ratios as shown in Table 2. All diets were steam-pelleted at 80 ˚C and offered to broiler chickens from 14 to 35 days post-hatch. Each of the ten dietary treatments was offered to 6 replicate cages (6 birds per cage) or a total of 360 off-sex male Ross 308 chicks (parent line). Birds were allowed ad-libitum access to feed and water with daily illumination period of 18 hours. Initial and final body-weights were determined, feed intakes were recorded from which feed conversion ratios (FCR) were calculated. The incidence of dead or culled birds was recorded daily and their body-weights used to adjust FCR calculations. Statistical analysis of data and generating the response surfaces was completed with R 3.0.3 software. 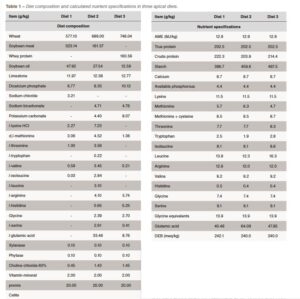 Significant treatment effects (P<0.01) were observed for weight gain (range 1.900 to 2.089 g/bird), feed intake (range 2.777 to 2.926 g/bird) and FCR (range 1.401 to 1.484), as shown in Table 3. Thus, the best performing birds held advantages of 9.95% in weight gain, 7.96% in feed intake and 5.59% in FCR over the worst performing birds. These marked advantages may be attributed essentially to differences in protein digestion rates across the ten diets. From visualization of the response surfaces (Figure 1), it is evident that the optimal weight gain and FCR was supported by a dietary formulation containing a combination of 475 g/kg standard (soybean meal) and 525 g/kg rapid (whey) protein digestion rates. Then the composition of the ideal diet may be deduced; this diet contains 153 g/kg soybean meal, 84 g/kg whey and a total of 13.41 g/kg of ten unbound amino acids, as shown in Table 4. 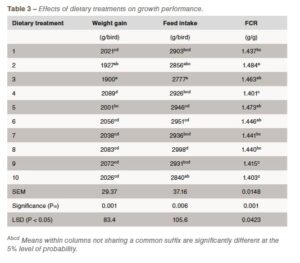 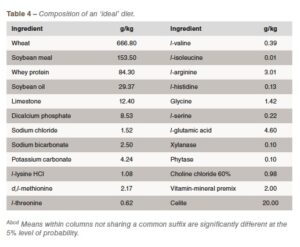 In this study, there was a positive linear relationship (r=0·706; P<0·001) between protein (N) disappearance rates (g/bird/day) in the distal ileum and weight gain, which illustrates the value of ‘rapid protein’. These outcomes support the findings of the present study where, effectively, inclusions of 84.3 g/kg rapidly digested whey protein and certain unbound amino acids (arginine, histidine, glutamic acid, glycine, serine) in the standard wheat-soybean meal diet enhanced both weight gain and FCR. The involvement of arginine and histidine is of interest but an explanation is not straightforward. Alternatively, that unbound glutamic acid, glycine and serine may have contributed to this result is noteworthy as these “non-essential” amino acids are all involved in the elimination of excess N as uric acid via the Krebs uric acid cycle. The dietary provision of these unbound, rather than protein-bound, amino acids implies that their very rapid availability may have benefitted the relevant metabolic pathways. Diet 2 supported significantly inferior weight gain and FCR in comparison to standard diet 1 and diet 2 contained substantial unbound amino acid inclusions. This is of obvious relevance to the development of reduced-crude protein diets as they also contain substantial amounts of unbound amino acids. The ‘ideal’ diet shown in Table 4 would not be economically viable in practice; nevertheless, it does demonstrate that the performance of broiler chickens may be enhanced by inclusions of ‘rapid’ and ‘very rapid’ sources of protein/amino acids in a standard diet.