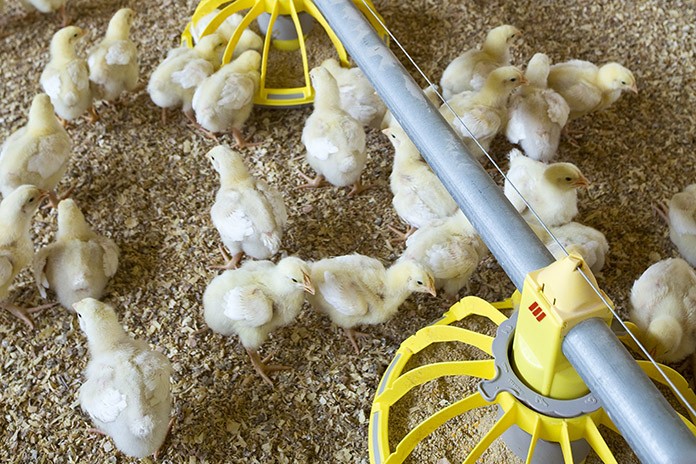 Consistent and relatively high nutritional value of maize has made it the widely used cereal in the poultry industry worldwide, contributing up to 65% of the metabolisable energy and 20% of the protein in typical poultry diets. It is common practice to grind the cereal grains prior to incorporating into the diets. Published data regarding the effect of particle size on broiler performance fed maize-based diets are contradictory. Reece et al. (1985) found that the maize particle size (geometric mean diameter, 0.68 vs. 1.29 mm) had no effect on the performance of broilers fed crumbled or pelleted diets. Amerah et al. (2008) showed that coarse grinding of maize (7-mm hammer mill screen size) had positive effects on broiler performance compared with fine grinding (1-mm screen size) in pelleted diets. The physical form of feed is an important factor, which confounds the effect of particle size on growth performance and nutrient digestibility. Abdollahi et al. (2013) showed that in maize-based diets, pelleting had no effect on the ileal digestibility of starch and N but improved that of fat. Only minimal attempts have been made to investigate the interaction between feed form and particle size on the nutrient utilisation of broilers fed maize-based diets. The present experiment was designed to compare the interaction between feed form (mash and pellet) and particle size (fine, medium and coarse) on nutrient utilisation and performance of broiler chickens in starter phase.

Materials and methods
The experimental design was a 2 × 3 factorial arrangement of treatments evaluating two feed forms (mash and pellet) and three particle sizes (fine, medium and coarse). Whole maize was obtained from a commercial supplier, and ground in a hammer mill to pass through screensizes of 2.0, 5.0 and 8.0 mm for fine, medium and coarse grades, respectively. A maize-soybean meal-based diet was formulated to meet the Ross 308 strain recommendations for broiler starters. Following mixing, each diet with similar maize particle size was divided into two equal batches. The first batch was retained as unprocessed mash. The second batch was steam-conditioned at 70ºC and pelleted using a pellet mill capable of manufacturing 180 kg of feed/h and equipped with a die ring with 3-mm holes and 35-mm thickness. All diets contained titanium dioxide as an indigestible marker. Each of the six dietary treatments was offered ad libitum to six replicate cages (eight birds per cage). Body weights and feed intake were recorded at weekly intervals throughout the 21-day trial. From d 17 to 20, feed intake and excreta output were measured quantitatively per cage for the determination of AME. On d 21, ileal digesta were collected for determination of apparent ileal digestibility (CAID) of N, starch and fat. On d 21, two birds per cage, with body weights closest to the mean weight of the cage, were selected, weighed and euthanised by cervical dislocation. The empty weight of gizzard of individual birds was determined and the pH of gizzard contents was measured with a calibrated digital pH meter.

Results and discussions
Birds fed pelleted diets had higher (P<0.05) weight gain and consumed more (P 0.05) feed than those fed mash diets (Table 1). In mash diets, fine grinding resulted in lower (P<0.05) feed per gain compared to medium and coarse grinding, whereas, in pelleted diets, there was no effect (P>0.05) of particle size. The benefits of pellet feeding on broiler performance have been extensively reported and the current work confirms the benefits in terms of higher feed intake, weight gain and feed efficiency. Abdollahi et al. (2013) reported that pelleting a maize-based broiler diet had no effect on the CAID of N and starch but improved that of fat compared to mash diets. Jimenez-Moreno et al. (2009) suggested that steam cooking might release the lipids encapsulated within the oil bodies of grain. The fact that most of the dietary fat content in the maize-based diets originated from intact fat contained within maize and not from the supplemental oil source, lends support to this suggestion.
The shorter digesta retention time and an elevated gizzard pH, due to an under-developed gizzard, are possible physiological limits to optimal digestion in pellet-fed birds. It has been suggested that increased retention time in the gizzard as a consequence of increased gizzard volume may increase nutrient digestibility by providing more time for the secretion of hydrochloric acid and possibly pepsin, and by increasing the intestinal refluxes that serve to re-expose the digesta to pepsin. It is noteworthy that improvements in starch digestibility and AME in pelleted diets, with increasing particle size, were associated with higher gizzard weights and reduction in gizzard pH. Overall, although pelleting has been shown in some studies to even out the differences in particle size, the current findings demonstrate that coarse grinding of maize, through enhanced gizzard development and functionality, may be beneficial to nutrient and energy utilisation and growth performance in broilers fed pelleted diets.
References are available on request.
From the proceedings of the Australian Poultry Science Association