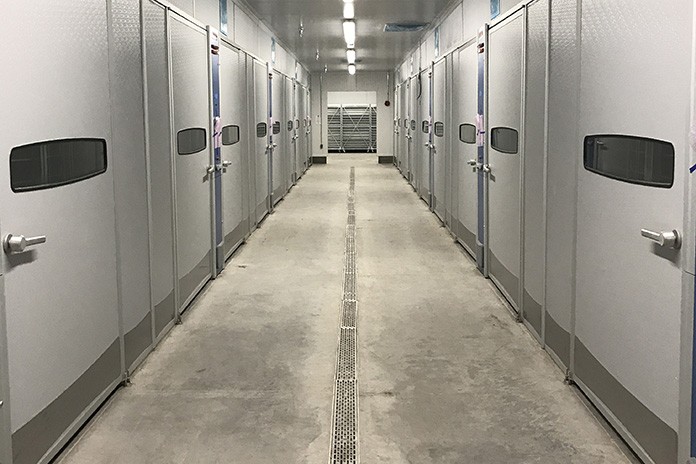 Hendrix Opening – Grand Island, Nebraska.
Jamesway is proudly awaiting the grand opening in August of a new Hendrix Genetics facility in Grand Island, Nebraska. This very well publicized project aims to develop the local markets of the area and is heavily endorsed by the local governments.
This 24 million-layer chick hatchery is supplied with Jamesway Platinum 2.0 Single-Stage incubators and hatchers. The hatchery demonstrates the commitment of Hendrix Genetics in serving the US-market with premium quality day-old layer chicks. The site was chosen for its’ prime location which will allow a chick to be delivered anywhere in the U.S. within 24 hours of hatching.

Jamesway, which has supplied incubators and hatchers to all Hendrix Genetics hatcheries, was an easy choice for machine supplier especially considering their focus on biosecurity. The Platinum 2.0 with its removable ECU allows the entire machine to be fully disinfected in minutes, making it the most biosecure machine on the market. Jamesway also supplied the HVAC systems. The facility is installing 30 P120 incubators and 18 P40 hatchers.

The hatchery’s opening is scheduled for August 15 with the first hatch to be pulled within the last weeks of September.
Based in Boxmeer, the Netherlands, Hendrix Genetics is a privately-held, international multi-species breeding company with activities in layer, turkey, swine, traditional poultry and aquaculture breeding. The layer Business Unit of Hendrix Genetics breeds pure line layers in seven R&D centers, located in Canada, France and the Netherlands, and produces parent stock of day-old chicks in five main production centers, located in Canada, Brazil, the Netherlands, France and Indonesia.