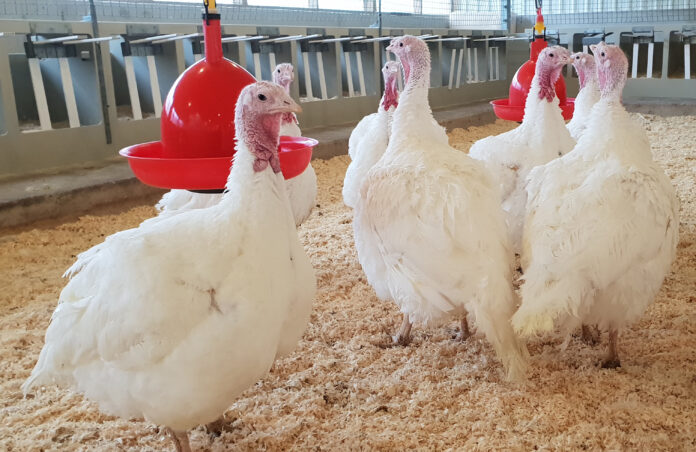 The first few weeks between transfer of turkeys to the laying farm and the peak of production can have a big influence on flock performance depending on how it is managed. Get this stage right and the flock will perform well and demand less labour.

Transferring birds to the laying farm should coincide with the stimulation of the turkeys This is where birds go from a short day length to a long one (normally 14 hours), stimulating them to lay eggs. The transfer is usually carried out between 29 and 30 weeks of age. Transferring the females before this period is likely to reduce egg production and produce more small eggs. Transferring after 30 weeks of age can result in a higher peak of production but a lower persistency of lay. Females must always move to a higher intensity light from the one in rear, it’s recommended that doubling the lux level in lay to achieve stimulation and a minimum of 100 lux is necessary (see Figure 1).

Egg production will normally start between 14 to 18 days after photo stimulation. Care must be taken when selecting the type of artificial lighting, as the red part of the light spectrum is essential. This is because it has been proven that this red part is important for photo stimulation of egg production. Natural daylight provides the best light intensity and quality as it emits a broad spectrum of light.

There are two nest box types, manual and automatic nests. Either system has its own benefits and can be compared in Table 1. 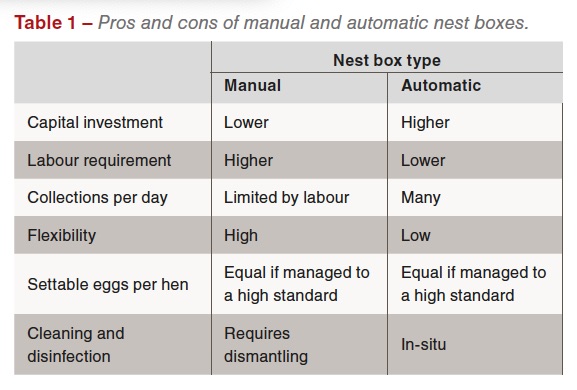 When using manual nests, it’s necessary to put a minimum depth of 8 cm of shavings into the box to ensure a comfortable place for the bird to lay and a safe place for the egg to sit. Dust free wood shavings are the best material to use, but should always be stored in a clean dry, vermin proof, bio secure storage area. The nests will need to be topped up regularly and contaminated material removed, especially at the start of the laying period when there is an increased level of nesting activity. For auto-nests, always refer to the manufacturer’s guideline on initial setup.

Ensure that the planned female stocking density is correct for the house area and that you have sufficient nest boxes for the females to prevent floor eggs and maximise production of good quality settable eggs. Table 2 below shows the recommended number of females per nest box for Nicholas Select females and B.U.T. Females. Insufficient next boxes can reduce settable egg numbers by increasing the number of floor eggs, the number of broody birds and reject eggs.

Training of the females

The time between lighting and peak production is the most important period for familiarisation of the females to their new environment and training them to use the nests. This is important as it will reduce the amount of the turkeys laying floor eggs. The occurrence of floor eggs is a good measure of the success of nest box training and should not exceed 1% of total egg production.

Make nests available 24 hours per day from the beginning of transfer. Traps should either be tied up or removed from the entrance to the nest (see Figure 2). The nest boxes should stay in this state until 25-35% of production is reached to encourage birds to enter. Reinstate traps gradually over a time period of a week and if you see an increase in floor eggs during this time, reduce the amount of nests being reinstated. Eggs should be collected and females pushed off the nest. The frequency of egg collections should be increased gradually as egg production increases. During warmer weather it is advised that the nests should be closed during the night and opened again when the lights come on in the morning.

The nest-box opening and closing mechanism should be run twice per day. This practice will help familiarise the turkeys to the operation of the nest mechanism and avoid any stress associated with its activation. Automatic nest boxes should be open even at night until 20 to 30% of production is reached. Once this has been reached, nests should be opened 30 minutes after lights have come on and closed 30 minutes before lights will be switched off. The stockman should assess the level of nest box activity to determine when to push-off the females and collect the eggs. Gradually increase the number of push-offs from the nests as the egg production increases, see example in Table 3 below. 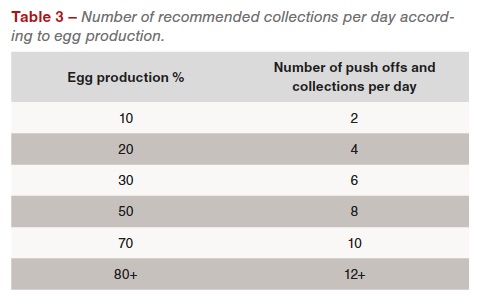 Cleaning of the matting usually begins at the end of the 5th week of production and should ideally take place at the end of the daily laying period. The programme for egg collections should be adjusted with changes in egg production. During the daily peak of egg production it may be necessary to collect more frequently than once an hour. It’s important to collect floor eggs to discourage broodiness at least every time a ramp push-off is conducted and as often as every 30 minutes during the daily peak of egg production. Where multiple rows of nests are installed in the house, operate the rows of nests sequentially. This will allow farm staff to push-away the females from the ramps before the next set of nests pushes-off the females. It is recommended that the nests are closed for a maximum of 3 to 4 minutes which should be sufficient time for the farm staff to push the females away from the ramps.
In all cases it would also be wise to consult the manufacturer for their recommendations. See Figures 3 and 4 for automatic nest box examples. 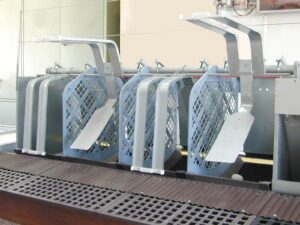 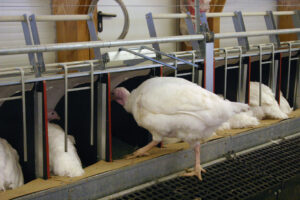