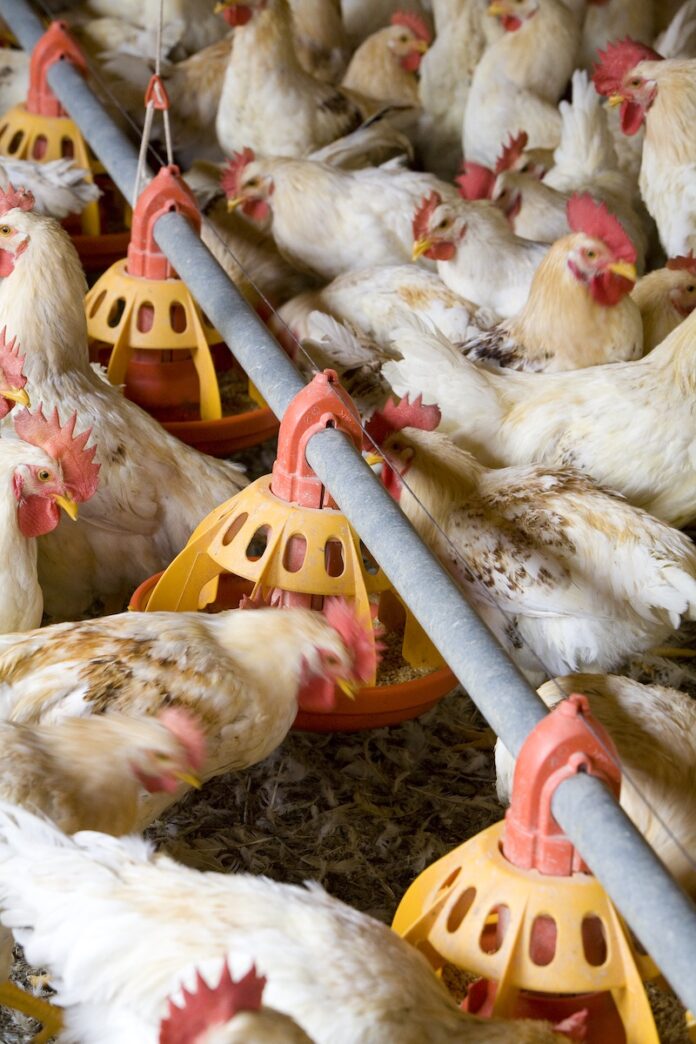 Pronounced elevations in free threonine plasma concentrations have been consistently observed pursuant to crude protein reductions in broiler diets. However, the magnitude of these threonine spikes appears related to inferior feed conversion ratios. Therefore, this paper seeks to develop a rationale for the mechanisms underlying elevated threonine plasma levels.

Threonine is the most recently discovered amino acid but is also the third limiting amino acid in diets for broiler chickens. There is considerable interest in reducing crude protein (CP) contents in broiler diets because their successful development would generate several advantages including a reduced dependence on imported soybean meal. Decades ago, Fancher and Jensen (1989) reported that free threonine concentrations in systemic plasma spiked by 87% (1635 versus 876 nmol/L) in female birds at 42 days post-hatch following a reduction in dietary CP from 183 to 159 g/kg. Moreover, we have consistently observed similar outcomes including a threonine spike of 116% (1093 versus 505 μmol/L) in systemic plasma following a 200 to 156 g/kg CP reduction in diets offered to male birds at 35 days post-hatch. There was a linear relationship (r=0.723; P<0.0001) between increasing threonine plasma levels and deteriorating FCRs across four dietary CP levels in this study. Thus, questions are raised as to the genesis and relevance of free threonine spikes in plasma concentrations in chickens offered reduced-crude protein diets.

Threonine is an essential amino acid; therefore, the likelihood is that elevated threonine plasma concentrations are due to a down-regulation of hepatic enzymes with the potential capacity to catabolise threonine. Threonine is converted to acetaldehyde and glycine by threonine aldolase (TA), to α-ketobutyrate by threonine dehydratase (TH) and to acetyl-CoA and glycine by threonine- 3-dehydrogenase (TDH). However, Akagi et al. (2004) found that hepatic TDH activity (88%) is dominant in avian species (Japanese quail); whereas, TH (93%) is dominant in rats. As TDH metabolises threonine to acetyl-CoA, these researchers concluded that threonine is a ketogenic amino acid in birds, as opposed to mammals, where it is regarded as almost an exclusively glucogenic amino acid. Consequently, it follows that the genesis of elevated free threonine plasma concentration is the down-regulation of hepatic TDH activity. Theoretically, threonine is a glycine precursor, but this would not be the case if TDH activity is being down-regulated. In Chrystal et al. (2020) increasing threonine plasma concentrations were linearly associated (r=-0.608; P<0.001) with decreasing glycine concentrations, which indicates that threonine was not being catalysed into glycine.

Several papers have investigated the impacts of dietary levels of protein, amino acids and threonine on TDH activity but they have not been conclusive. This is reflected in the Davis and Austic (1997) suggestion that hepatic TDH activity is influenced by dietary protein levels or other amino acids more so than by threonine itself. Threonine is the dominant amino acid in avian mucin and is present in other endogenous secretions into the gut. Consequently, in the order of 30% dietary threonine is utilised by the gut mucosa and is denied entry into the portal circulation and threonine is also required for feathering and to maintain immuno-competence in addition to being incorporated into protein. Nevertheless, the reasons for elevated free threonine plasma levels from reduced-CP diets remain obscure.

The catabolism of threonine by TDH generates acetyl-CoA which is a central metabolic intermediate capable of influencing the activity of multiple enzymes. Interestingly, Guerranti et al. (2001) investigated the inhibition of hepatic TDH activity in rats with a focus on fatty acids but their conclusion was that TDH is the target of selective feedback inhibition by all compounds derived from its major end-product, acetyl-CoA. However, glucose can be metabolised to generate acetyl-CoA, which may be pivotal. Reduced-CP diets typically contain more feed grain, more starch and elevated starch:protein ratios; therefore, reduced-CP diets have the potential to generate more glucose than conventional diets. Thus, the rationale is that increased acetyl-CoA concentrations derived from relatively high starch/glucose levels in birds offered reduced-CP diets down-regulate TDH activity via feedback inhibition to generate spikes in free threonine plasma concentrations.

A series of five reduced-CP diet feeding studies have been completed in which average CP contents were reduced in a step-wise manner from 213.5 to 166.5 g/kg CP. There is a quadratic relationship (r=0.702; P<0.005) between dietary CP and threonine plasma levels across these five studies where threonine levels escalate once CP is reduced below 204.4 g/kg, as shown in Figure 1. 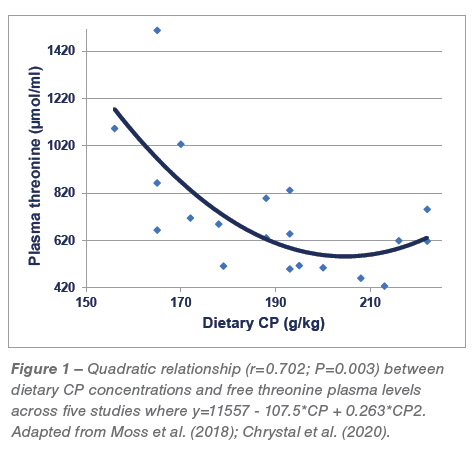 It may be deduced from the relevant quadratic regression equation that a reduction in dietary CP from 210 to 160 g/kg would generate an 87.9% (1090 versus 580 μmol/L) spike in free threonine plasma concentrations. There is also a quadratic relationship (r=0.841; P<0.0001) between threonine plasma levels and FCR where high threonine levels are associated with inferior feed conversion efficiencies as shown in Figure 2. In addition, there are significant linear relationships between analysed dietary starch concentrations (r=0.522; P<0.025) and analysed dietary starch:protein ratios (r=0.623; P<0.005) with threonine plasma levels. Finally, these relationships do not validate the rationale; however, they are entirely consistent with the premise that acetyl-CoA derived from starch and glucose is down-regulating TDH activity and generating elevated threonine plasma levels. That threonine spikes are associated with deteriorating FCR is probably not a direct “cause and effect” but may reflect an underlying physiological disturbance. 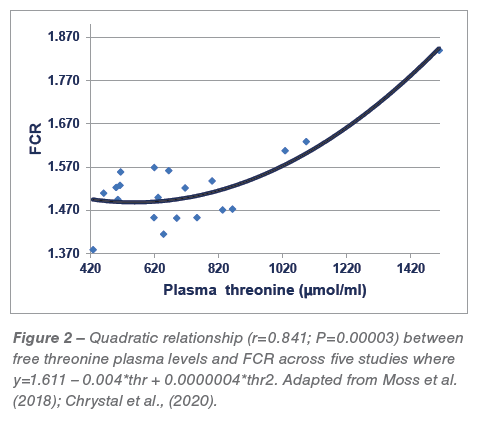 It appears that one strategy that might diminish elevated plasma threonine concentrations would be to limit increases in starch concentrations and starch:protein ratios in reduced-CP diets. The strategy of ‘capping’ dietary starch:protein ratios approach has been evaluated and displayed some promise. Reducing analysed dietary starch:protein ratios from 1.68 to 1.41 in 205 g/kg CP, wheat-based diets improved weight gain by 10.37% (2161 versus 1958 g/bird), feed intake by 3.10% (3492 versus 3387 g/bird) and FCR by 4.04% (1.616 versus 1.684) at 35 days post-hatch. By notionally relating soybean meal (475 g/kg) with full-fat soy (360 g/kg) to reduce dietary CP in this study, wheat inclusions were reduced from 607 to 502 g/kg, analysed starch concentrations from 347 to 288 g/kg while CP was maintained at 206 and 205 g/kg.

Free threonine plasma concentrations is an intriguing subject. In rats offered a diet in which amino acids were derived from casein, threonine plasma concentrations increased by 36.0% (424.4 versus 312.0 μmol/L) over a post-prandial period of 3 hours. However, when a corresponding blend of ‘free’ amino acids was offered, threonine concentrations increased by a more robust 60.5% (760.4 versus 473.7 μmol/L). This equates to a difference of 38.3% and implies that inclusions of non-bound (synthetic, crystalline) amino acids in broiler diets may be contributing to elevated threonine plasma levels in some way. Our contention is that the strategy of reducing dietary starch:protein ratios should be pursued in the development of reduced-CP diets. This strategy may enhance growth performance and curb increased fat deposition in broilers offered tangibly reduced-CP diets. Given such an outcome, it is possible that elevations in threonine plasma levels will be diminished, almost as an indication of acceptable performance in this context.