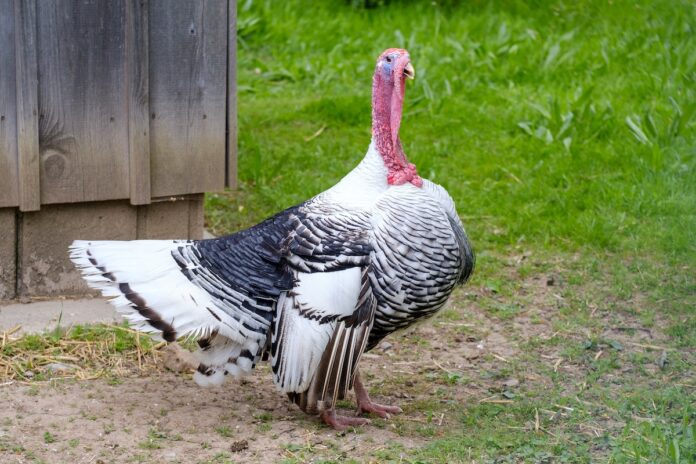 Clostridium septicum is a ubiquitous, spore-forming bacterium associated with spontaneous gas gangrene in both livestock and humans. The spores can persist in harsh environments, such as the gastrointestinal tract or tissue, and remain undetected for extended periods. When environmental conditions are appropriate for growth, the spores will germinate and proceed to proliferate.

Clostridium septicum (CS) is capable of producing a variety of toxins. However, the alpha-toxin is the one attributed to the virulence of CS and responsible for the localized cellulitis (or dermatitis). In commercial turkey flocks, dermatitis causes significant acute mortality. Historically, antibiotic treatment, such as penicillin, has been used to control mortality in dermatitis-affected turkey flocks. However, the identification of antibiotic alternatives to control this disease has become crucial due to the consumer push for antibiotic-free production.

Bacterial populations have evolved mechanisms to sense and respond to the environment. As the cell (population) density rises, nutrients become depleted and certain signaling molecules become more readily concentrated. These signaling molecules may induce events, such as cell death, sporulation, and/or secretory molecule production depending on the species. For Gram-positive bacteria, such as Clostridium spp., the spores are resilient and are capable of surviving high temperatures, acidic conditions, those that would be fatal to vegetative cells, especially to populations that prefer anaerobic environments. The probability of ingested spores surviving passage through acidic environments increases the likelihood of the colonization of the GIT. Thus, controlling the amount of CS spores in the environment and establishing immunity before exposure is important because the bacterium may enter via a puncture wound or at the site of an injury.

There are two portal of entry theories for CS affecting commercial turkeys: 1) the inside-out theory and 2) the outside-in theory. The inside-out theory, which remains up for debate, suggests that CS within the GIT spreads hematogenously perhaps due to an increase in gut permeability (stress or pathogen-related). The CS spores then can enter a state of dormancy in tissue. Upon injury or damage to that specific area, the site shifts to predominantly a hypoxic environment, and the CS spores germinate. The outside-in theory suggests that CS spores enter a wound and replicate at the site of injury once environmental conditions support germination.

The type of myonecrosis caused by Clostridium spp. results in either a traumatic or nontraumatic (spontaneous) form of gangrene. The CS alpha-toxin is responsible for the rapid degradation of tissue (spontaneous gas gangrene) and elevated mortality related to septic shock, whereas C. perfringens causes traumatic gas gangrene predominantly in response to significant injury. Oral administration of CS has not been shown to induce disease, however, intravenous injection with filtered CS culture supernatant or CS spores induced disease. Moreover, oral CS challenge in conjunction with administration of dexamethasone (experimentally induced immunosuppression), which has been shown to increase paracellular leakage in the intestine, did not induce CS-associated cellulitis. Additionally, characteristic dermatitis lesions have been predominantly associated with CS rather than CP post- subcutaneous challenge with spores. Age appears to be another factor as 7 week-old turkeys were more susceptible to infection post-challenge with CS compared to 3 week-old turkeys.

Inactivated vaccines for Clostridial diseases have been historically efficacious, but tend to require multiple doses to establish immunity. Various research groups have evaluated subcutaneous vaccination with a CS bacterin-toxoid or combined CS and CP bacterin-toxoids as preventatives for dermatitis. There is no cross-reactivity between CS and CP alpha-toxin since CS alpha-toxin lacks phospholipase C activity. Therefore, antigenic components for CP are not necessarily required to prevent dermatitis in turkeys, whereas CS antigenic components (alpha-toxin specifically) must be included in the vaccine formulation. Although CP has been recovered from dermatitis lesions, it could more so be an environmental contaminate that proliferated post-mortem. CP aside, vaccination with a CS bacterin-toxoid prevented mortality 24h post-challenge with CS spore culture under laboratory conditions. Field studies were conducted and the vaccinated group had lower cellulitis-associated mortality and reduced penicillin pack usage compared to the non-vaccinated group.

Previously, we evaluated the immunogenic efficacy of a CS bacterin-toxoid and select adjuvants, including aluminum hydroxide gel, mannosylated chitosan, and Seppic Montanide 71R VG oil adjuvant, under laboratory and field conditions. Administration of the CS bacterin-toxoid oil emulsion vaccine at 8 weeks of age reduced CS-associated mortality and the days of penicillin application in the field. However, single vaccination with an inactivated bacterin-toxoid may not always be sufficient for controlling dermatitis in commercial turkey flocks. A single dose of a killed vaccine is limited by the amount of antigen presented to the immune system. Ongoing and future research consists of 1) optimizing large-scale CS-alpha toxin antigen production to improve protection and 2) attenuation of highly toxigenic CS strains as potential live vaccine candidates.