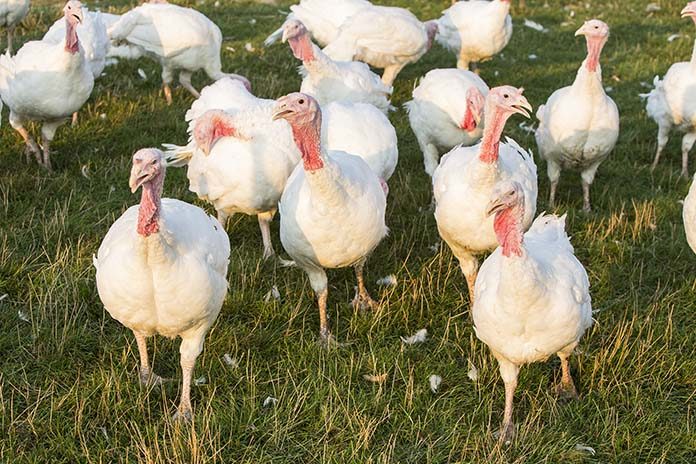 Avian reoviruses (ARVs) belong to the genus orthoreovirus in the family Reoviridae. They are nonenveloped, double-stranded RNA viruses that are ubiquitous in domestic poultry with most of them being non-pathogenic. However, ARVs have also been associated with enteritis, hepatitis, neurological disease, myocarditis, respiratory disease and viral arthritis/tenosynovitis in chickens (chicken viral arthritis) or turkeys.

Is turkey reoviral arthritis a new disease?
In turkeys, reoviruses have long been associated with poult enteritis. Reovirus was isolated from joints and ruptured tendons of turkeys with tenosynovitis/arthritis as early as 1980; however, experimental infection of turkeys failed to reproduce the disease. After, a hiatus of >20 years, the problem of reovirus-associated lameness in turkeys re-emerged in the Midwestern and Eastern states by 2011. Turkey reoviral arthritis is now recognized as a significant cause of lameness in U.S. turkeys and the associated reovirus is referred to as turkey arthritis reovirus (TARV).
The disease has been reported from all turkey producing states. The lameness affects male turkeys 12-17 weeks of age (occasionally hens) and is characterized by recumbency with wing tip bruises (“wing walkers”), uni- or bilateral swelling of the hock (tibiotarsal) joints, and increased fluid in the tendon sheaths and hock joints. Gross lesions include hock swelling, periarticular edema and fibrosis, tenosynovitis, and occasional gastrocnemius or digital flexor tendon rupture (Figure 1). Lameness affects 15%-70% of a flock resulting in huge economic losses to turkey producers from excessive culling, diminished carcass quality and reduced market weights in addition to raising animal welfare concerns. For example, a turkey company in Pennsylvania lost an estimated 3 million dollars in 2014 due to re-emerging TARV-associated lameness. The MVDL has recently diagnosed a large number of TARV cases. In 2017, we received 268 lameness cases from eleven states of which 169 (63%) demonstrated typical clinical signs and gross lesions, and were positive for TARV by virus isolation and/or PCR. Because of this increase in disease prevalence, turkey producers and field veterinarians are eager to find new solutions to this problem. Is hock swelling and tendon rupture the only issue with TARV?

We have also observed intertarsal cartilage erosions in some cases (Figure 2). The severe lameness results in culling of birds as the primary cause of death; however, flocks with TARV-induced lameness often have increased death loss from aortic rupture. In addition, we have observed more clinical lameness caused by TARV in younger turkeys at the age of 6-8. Finally, unlike the majority of TARV cases diagnosed at the Minnesota Veterinary Diagnostic Lab in 2011, many current cases show concurrent bacterial infection (e.g, Ornithobacterium, Pasteurella, Staphylococcus). A diagnostic case definition of turkey reoviral arthritis has been created and is listed at end of this article. Diagnosis is generally based on history, typical clinical signs, gross lesions, microscopic findings (Figure 3), and virus isolation and/or PCR. Role of reovirus in turkey lameness

At the MVDL, we have isolated more than 250 TARV strains from cases of turkey lameness from 2011-2017. With funding from the Rapid Agricultural Response Fund (RARF), University of Minnesota, we experimentally reproduced the disease in turkeys fulfilling Koch’s postulates. Oral inoculation of TARVs can reproduce lameness and tenosynovitis in turkeys, but not CARV (chicken arthritis reovirus) or TERV (turkey enteric reovirus); see Figure 4. We have established a challenge model of TARV infection in turkeys, which was created by comparing various routes of inoculation of field virus and the ability of these viruses to induce lameness and tenosynovitis. The TARV O’Neil strain was found to be highly pathogenic and became an effective challenge virus for our model. Live TARV O’Neil, when orally inoculated into turkey poults, undergoes early and high replication in the intestinal tract and bursa of Fabricius, followed by viremia and replication in liver, spleen and tendon (Figure 5). TARV not only replicates in intestine, but is shed in feces and can be transmitted to adjacent poults. Additionally, chicken enteric reovirus (CARV), turkey enteric reovirus (TERV) and TARV/MN4 failed to produce lameness or significant gastrocnemius tendon sheath inflammation when inoculated into poults by various routes.

TARV can survive in conventional house litter for over one week and survives in non-sterile drinking water for over two weeks. The turkey reovirus is highly susceptible to the following disinfectants (Table 1) with all tested disinfectants inactivating > 4 log10 TCID50 TARV within 10 min contact time.

We have sequenced the complete S, M, and L class gene segments of 20 TARVs and 10 TERVs, respectively. During the last two years, we have sequenced four newer TARV strains post-2015 and have found divergence within TARVs and evidence of re-assortment among TARVs. Sequencing of a large number of historical and current isolates will inform us of changes in the recent strains of TARVs isolated after 2015.

Phylogenetic analysis of the original TARV isolates at MVDL, based on the S4 gene segment, for example, divided the five isolates into two subgroups: subgroup I containing TARV-MN 1, 2, 3 and 5 and the other subgroup containing TARV-MN4. Isolates in subgroup I had a similarity of 97% to 100% with each other while subgroup II (TARV-MN4) had a similarity of only 89.2% with subgroup I viruses. This isolate showed 90% to 93% similarity with turkey enteric reoviruses (TERVs) in the US while other isolates in subgroup I had 89% to 97.6% similarity. These results indicate divergence within TARVs as well as from enteric viruses (Figure 6) and demonstrated that TARV is distinct from the chicken arthritis reoviruses. A TARV Task Force was established in Minnesota that included personnel from the University of Minnesota, turkey breeder and vaccine companies, and field veterinarians. This Task Force had a roundtable discussion to deal with the problem of re-emerging TARV infections. Task Force participants determined that development of novel vaccine strategies for prevention and control of TARV outbreaks was one of the top five research needs. The control of TARV in turkey production has focused on inoculating breeders with custom autogenous vaccines, initially made with killed 2011 strains. Use of killed injectable vaccines initially helped slow down the infection in commercial turkeys, but now appears less effective as determined by a spike in TARV-induced lameness from 2016-2017. It is a widely held belief that this vaccine failure is due in part to the use of inappropriate vaccine strains, because of mutation of TARV strains circulating in the field. For example, TARVs isolated from 2014 field cases were found to be antigenically different from 2011 isolates based on virus neutralization assays. Additionally, our previous work indicates that TARV has close homology with turkey enteric reoviruses (TERV) and replicates early in the intestinal tract. We suspect the TARV that emerged 7-8 years ago was a mutation of enteric reovirus.

Custom autogenous vaccines with 2011 TARV isolates were developed and used to control viral arthritis in turkey flocks for several years. These autogenous vaccines were able to slow down the infection but in 2014 multiple turkey flocks in different geographical areas began presenting with viral arthritis and the disease continues unabated. Reovirus isolated in 2014 from affected birds is antigenically different from the 2011 isolates based on virus neutralization assays with polyclonal antiserum. In an effort to reduce lameness, turkey breeder companies have been using autogenous, injectable killed TARV vaccines. However, the vaccine has shown varied efficacy and is not completely effective in controlling the disease. Future vaccines can be more effective if we understand how the virus is transmitted to poults and know at what ages birds are most susceptible (or resistant) to infection.

Origin of turkey arthritis reovirus
Because TARVs, only fully observed and characterized since 2011, bear high homology with TERVs and replicate early and to a high degree in the intestinal tract, we believe that TARVs have mutated from TERVs. Because our pathogenesis studies indicate that intestinal colonization must occur by TARV before viremia and internal organ invasion, a logical approach to vaccination is to focus on oral immunization to induce local immunity and reduce intestinal colonization by TARV. In theory, oral immunization is the best method to stimulate local immunity (mucosal immunity) of the alimentary tract and can be applied to both breeder turkeys and post-hatch turkey poults.

A diagnostic case definition
In TARV, clinical signs are characterized by reluctance to move, recumbency and limping on one or both legs. There is often uni- or bilateral swelling of the hock (intertarsal) joint. Morbidity can be as high as 40% and mortality is usually a result of culling or aortic rupture. Lesions observed in acutely affected birds at necropsy are uni- or bilateral enlargement (subcutaneous edema) of the hock joints, which contain increased volume of clear yellow to serosanguinous synovial fluid. Similar fluid can expand the sheath of the gastrocnemius and digital flexor tendons.

In chronic cases there is bruising of the skin of the hock, with prominent periarticular fibrosis, edema and occasional large flecks of fibrin within the subcutis and tendon sheaths. In a small percentage of cases one can observe partial or complete rupture of the proximal gastrocnemius tendon or a digital flexor tendon with hemorrhage at the level of the rupture.

From the Proceedings of Midwest Poultry 2018