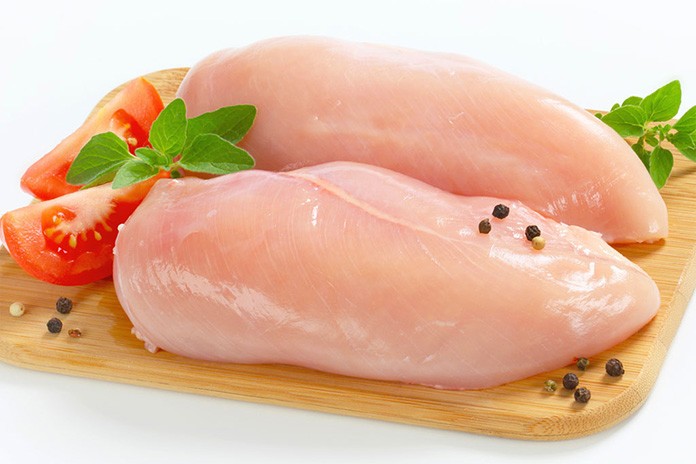 Water holding capacity (WHC) is defined as the ability of meat to hold its inherent and added moisture during fabrication, processing, and storage.
Poor water holding capacity in raw poultry meat results in diminished visual appeal and inferior palatability traits for consumers as well as reduced ingredient retention, protein functionality, and product yields for processors. Broiler breast muscles (Pectoralis major) are comprised of nearly 100% fast-twitch glycolytic muscle fibers making them particularly susceptible to undergoing a rapid postmortem pH decline and exhibiting inferior WHC characteristics. Postmortem muscle pH and protein denaturation are considered the main determinants of WHC in meat. Similar to turkey and pork, poor WHC in chicken meat is often associated with pale lean and low muscle pH. Despite these species similarities, however, the underlying mechanisms that control WHC in pale broiler meat are not well-established. In pork and turkey, low WHC is closely linked to excessive postmortem protein denaturation, particularly that of myosin. While this phenomenon is routinely cited in literature on WHC in chicken, actual data supporting this theory of WHC in chicken are absent or contradictory. Data from an in vitro study suggested that myofibrillar proteins from broiler breast muscles are more resistant to denaturation than similar proteins from pork muscle. Other reports found minimal differences in protein denaturation between pale breast meat and normal or dark colored meat. Furthermore, limited data have been reported on changes in WHC in chicken meat with postmortem time. It has been reported that cook and drip loss increased in broiler breast fillets from 1 to 6 days postmortem, but the mechanism for this increase was not explored. Using a salt-induced water uptake method, it has been observed that WHC is greater at 24 h than at 2 h postmortem in broiler breast meat. Thus, the objectives of the two studies reported here were: 1) to determine the relationship between WHC and protein denaturation in broiler breast meat exhibiting divergent WHC attributes, and 2) to determine changes in WHC and associated physicochemical characteristics in broiler breast meat throughout the first 24 h postmortem.

Relationship between WHC and protein denaturation (Experiment 1)
Segregating breast fillets by color resulted in sample groups with widely divergent meat quality attributes. Pale fillets exhibited lower pH and higher L* (lightness) values than dark fillets. With respect to WHC, dark fillets exhibited greater salt-induced water uptake and lower cooking loss at both 6 and 24 h postmortem and less drip loss accumulation during refrigerated storage compared to pale fillets. Despite differing in WHC, the overall degree of myofibrillar protein denaturation was not different between pale and dark fillets. Myofibrillar protein solubility was similar between pale and dark fillets at both 6 and 24 h postmortem. These data suggest that myosin denaturation may not be the primary cause of WHC differences between pale and dark broiler breast fillets and support the idea that myosin from chicken breast meat may be resistant to postmortem denaturation. Sarcoplasmic protein solubility was lower in pale fillets than dark fillets at both 6 and 24 h postmortem. Similar differences in sarcoplasmic protein solubility have also been observed between normal and pale broiler breast meat. While overall protein solubility measurements were not strongly correlated to WHC attributes in this study (data not shown), our data suggested that the denaturation of glycogen phosphorylase, a key sarcoplasmic protein involved in glycogenolysis, may be related to WHC. Gel electrophoresis analysis showed that the relative abundance of glycogen phosphorylase in the myofibrillar and sarcoplasmic fractions is strongly correlated to measures of WHC and indicated that there was a greater degree of glycogen phosphorylase denaturation in pale fillets from commercially processed broiler carcasses.
Similarly, it has been reported that glycogen phosphorylase denaturation was associated with high drip loss under experimental conditions in which broiler breast meat was incubated at 40°C for an extended time. Thus, postmortem changes in sarcoplasmic proteins may influence WHC attributes in broiler breast meat.

These studies demonstrate that WHC in broiler breast meat fluctuates due to underlying structural and biochemical changes occurring in the muscle. During the first 24 h postmortem, the WHC in broiler breast fillets changes in 3 distinct phases. Contrary to what is often assumed, differences in myosin denaturation do not explain variations in WHC in commercially processed broiler breast meat. However, the denaturation of specific sarcoplasmic proteins, such as glycogen phosphorylase, may have a direct impact on WHC in breast meat. Based on these results it is hypothesized that sarcoplasmic proteins denature due to postmortem pH and temperature conditions within the meat and precipitate onto myofilaments which alters protein surface interactions with water and lowers WHC in broiler breast meat. Understanding the dynamic nature of WHC and the controlling factors will provide the foundation necessary for developing effective processing strategies to improve final product quality and yield and for developing rapid, non-invasive techniques for predicting WHC in fresh poultry.
From the Proceedings of the 2016 Midwest Poultry Federation Convention