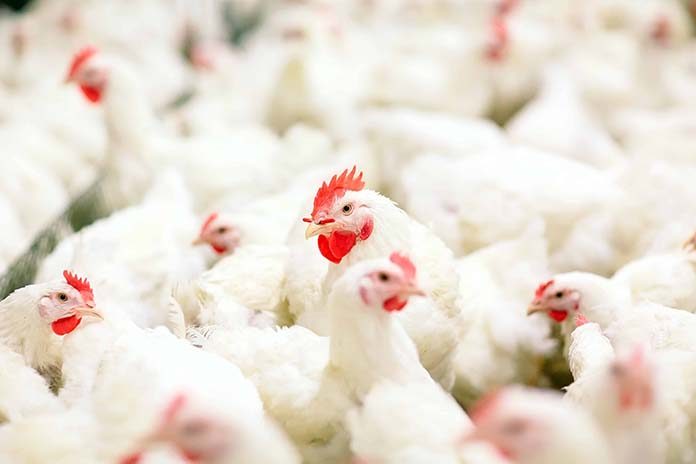 Considerable differences in the export dynamics Even though broiler meat exports are of great importance for the poultry meat producers in both countries, the share of exports in comparison to production differs considerably. While Brazil exported 30.1% of the chicken meat production in 2018, the share in the USA was only 16.8%. The data in Table 3 reveals the different dynamics in the broiler meat exports of the two countries. In Brazil the export volume grew by 492,000 t or 12.6% between 2013 and 2016. Then the meat scandals in combination with import bans by several major importing countries led to a sharp decrease of the export volume by 284,000 t or 6.5%. The Foreign Agricultural Service of the USDA (GAIN Report 1901) even estimated a considerably lower export volume of only 3.69 mill. t.
The falling U. S. chicken meat exports between 2013 and 2016 are a result of the increasing per capita consumption and the outbreaks of the Avian Influenza in the states of the northern Midwest in 2015. Even though broiler farms were not affected by the outbreaks, about 30 countries stopped imports of poultry products for about one year. It was not before 2018 that the export volume increased again. But they were still 3.8% lower than in 2013. In 2017 and 2018, Brazil exported chicken meat to more than 130 countries, about two thirds of the export volume were directed to only ten countries.
A closer look at the composition and ranking of the ten leading countries shows that the majority was exported to Asia. In 2018, seven of the countries of destination were located in this continent (Table 4). The three top-ranked countries shared 33.8% of the overall exports. South Africa ranked in fourth place with a share of 8.5%, followed by the EU with 4.5%. In the EU, the Netherlands, the United Kingdom and Germany were the main importing countries. Exports to EU member countries decreased considerably, however, between 2017 and 2018. Because of the meat scandal and the detection of Salmonella infected poultry meat, about 20 of the leading abattoirs lost their license to export into the EU.
According to preliminary estimates by the Foreign Agricultural service of the USA (GAIN Report 1901), exports fell to only 175,300 t in 2018, a loss of 45.8% compared to the export volume in the preceding year. It is expected that exports will stagnate at a level between 3.7 and 3.8 mill. t even in 2019. It was mentioned before that the outbreaks of the Avian Influenza virus in 2015 had far reaching impacts on U. S. poultry exports even though no broiler farm was affected. In addition, the export ban of the Russian Federation on poultry product imports from the USA, Canada and the EU also affected the export volume and the trade pattern.
In Table 5, the ten leading countries of destination for the broiler meat exports by the USA are listed. The data shows the slow recovery from the drastic decrease of the export volume in 2015. Nevertheless, the exports in 2018 were still about 126,000 lower than in 2013. A closer look at the composition and ranking reveals some interesting changes.
With exception that Chile was replaced by Vietnam, the composition of the ten leading countries of destination did not change between 2017 and 2018. Exports to Mexico (+ 51,000 t), Angola (+ 34,000 t) and Taiwan (+ 41,000 t) increased considerably while imports by Cuba, Canada, Hong Kong and South Africa were lower in 2018 than in 2017. The share of the ten leading countries of destination in the total broiler meat exports of the USA remained almost stable in the two analysed years.
The two countries differ considerably in the way they market broiler meat. Ined, Brazil marketed 29% of the total exports as whole birds, 63% as cutup parts, 5% as processed meat and 3% as salted meat. The high percentage of whole birds results from the preference for this product in the countries on the Arabian Peninsula. In contrast, 49 % of the total exports by the USA were marketed in processed form, 40% as cutup parts and only 11% as whole birds. A comparison of the composition of the ten leading countries of destination reveals that the two countries obviously try to avoid competition in major broiler meat importing countries. Both countries were able to strengthen their market position in Mexico. The USA lost market shares in Hong Kong and South Africa; Brazil in Saudi Arabia, Japan and the EU.

Perspectives
Projections of the future development of production and trade for both countries are only available for chicken meat. Besides the data set, which is published annually in the OECD-FAO Agricultural Outlook, data is also available in the USDA Projections for agricultural commodities.
The OECD-FAO Agricultural Outlook 2018 to 2027 estimates that poultry meat production in the USA will increase from 21.4 mill. t to 23.8 mill t. or by 11.3%. In the same time period, Brazil´s chicken meat production is expected to grow from 13.1 mill. t to 15.6 mill. t or by 18.9%. Despite the higher relative growth rate, the gap between the production volumes of the USA and Brazil is projected to remain at a level of 8.2 mill. t.
In the USA, broiler meat shares about 85% in total poultry meat production. As this contribution has been fairly stable over the past years, it can be assumed that the production volume for broiler meat will reach 20.2 mill. t. In Brazil, broiler meat contributes about 95% to the poultry meat production. Assuming a stable situation for the next decade, the production volume for broiler meat would be as high as 14.8 mill. t. Based on the assumption that in the USA about 17% of the produced chicken meat will be exported, the export volume in 2027 could reach a volume between 3.6 and 3.7 mill. t. This seems to be a realistic projection. The USDA expects a total export volume for poultry meat of 4.0 mill. t in 2027.
Brazil exported about one third of its broiler meat production. This would equal an export volume of 4.9 mill. t in 2027. This value is about 1.4 mill. t lower than the USDA projection for Brazil with 6.3 mill. t. This projection seems to be very unrealistic when taking into consideration that in 2018 about 4 mill. t of Brazil´s broiler meat production reached the global market.

*For the USA, data on broiler meat production and trade are published, for Brazil, only data for chicken meat are available. The share of chicken meat from spent hens is, however, only of minor importance in comparison to broiler meat so that the term ”broiler meat” will be used.