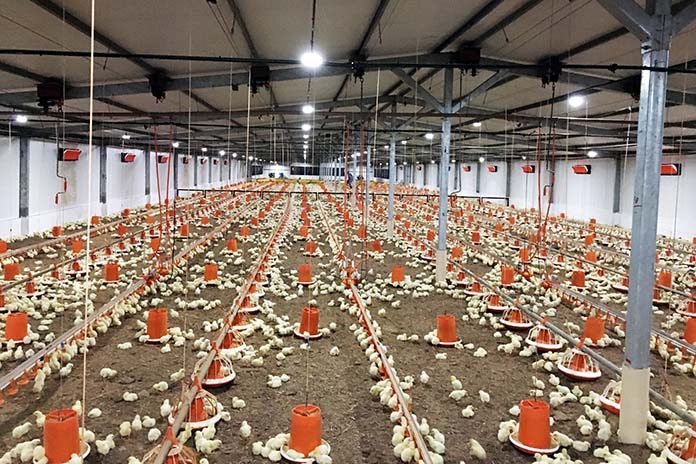 Investing in new technologies, while important, is not the only way to reach top performance potential in broilers. Simple efforts such as paying attention to what happens in a chicken house and taking care of the needs of broilers can have a significant impact.
As the potential for growth has increased in recent years, so too has the importance and influence of a chick’s first days of life on final meat results. Since broilers are able to achieve their processing weights in fewer days than in the past, the brooding part of their life represents a higher percentage of their total life. Additionally, in the first week of its life, a chick has the highest potential for growth and development that it will ever have, being able to multiply its weight by more than 4.6 times in the first seven days. This growth potential is fundamental for digestive, immune and cardiovascular systems. If systems such as intestines are not fully developed in the first week, chicks will have less capacity to assimilate feed in the following weeks with a higher final FCR. Also, a less-developed immune system will make chicks less resistant to diseases, which presents an animal welfare issue.
To achieve optimal chick growth during their first week of life, Cobb has identified the following five key principles:

Temperature
When chicks arrive at a farm, they cannot control or adjust their internal temperature until seven days of age. This means that producers must be the ones to provide chicks an environment where they can stay in their thermoneutral zone so that they do not need to divert energy normally used for growth and development to compensate for the adverse conditions. A chick that feels too cold will limit its activity to reduce heat loss and conserve energy, and feed will be used as fuel for heating instead of as protein and energy for growth. Similarly, an excessively hot environment will lead to waste of energy since an overheated chick will start panting to get rid of the excess heat.
The correct temperatures to provide chicks when they arrive are 32-33° C for the air, 30-32° C for the litter and at least 28° C for the concrete. The litter and concrete temperatures are very important since the feet of the chicks are the part of their body from where they tend to lose most of their heat. All of these temperatures will also depend on parameters like relative humidity and the type of heating used (e.g., radiant brooders, forced air heaters, etc.).
Observing the behavior of the birds will help signal if they are comfortable or not. Chicks should be evenly spread across the brooding area eating, drinking, walking and “talking” to each other. Do not forget to directly measure the chicks’ temperature with a cloaca thermometer to confirm the well-being of birds, which should read 40.4-40.6° C in the first five to seven days and 41.5° C later.

Feed
Feed intake makes it possible for chicks to grow, developing necessary tissues and systems. It is fundamental that chicks have easy and unrestricted access to feed from the start. Their growing potential is highest during the first week and will naturally decrease in the following weeks. However, this will be irreversibly reduced if a correct seven-day weight is not achieved. In a chick’s first days, protein and energy from the feed will be used for basic metabolic needs and for development of vital systems like the skeletal, digestive and immune. Therefore, if not enough feed is available, development will be delayed and reduced since chicks will just try to stay alive and only use whatever protein and energy is left for development. Inadequate feed amounts can also lead to loss of weight/uniformity and increased culls and mortality as chicks will be more sensitive to disease challenges and will have depleted immunity levels following early vaccinations.
To achieve the correct feed intake, make access to feed as easy as possible. Cobb-Vantress advises poultry men to cover at least 50 percent of the brooding area with good-quality paper and provide at least 75 grams of feed per chick on the paper. This allows all chicks to have adequate feed available and will make for an easier transition to the automatic feeding system. It is also possible, especially with partial house brooding, to use trays or supplemental manual feeders. If using manual feeders, make sure that there is at least one per 50 chicks and that they never run empty since that will create a huge stress for chicks, leading to reduced growth.

Water
The importance of providing fresh, good-quality water is often underestimated but vitally important. In fact, a young chick’s body is more than 70 percent water. Water is a critical component of chick development, helping to transfer nutrients, remove toxic substances, and disperse heat and chemical reactions. Also, remember: Feed consumption is directly correlated to water consumption, so if chicks do not drink enough they will also not eat enough. There are many systems available to provide water for chicks, both open and closed varieties. Nipple drinkers are the most hygienic option and also provide easy distribution to the chicks. When using these, there are several rules to follow to ensure water intake is correct. The first parameter is temperature. This can be difficult to manage, given high brooding temperatures and the low consumption during a chick’s first days, causing water temperature to exceed the recommended level. Water temperatures higher than 25° C will have a negative impact on consumption. If the water temperature exceeds 25° C, then it is necessary to flush the lines at least three times each day in the first week. This will also help in maintaining clean drinker lines and removing biofilm. Calculate two seconds in flushing mode (one to two bars) per 1 meter of drinker line length.
A water flow through nipples of 40 milliliters per minute is recommended in the first week, but always follow manufacturers’ instructions. Keep nipple height slightly above the chicks’ heads and check that they can drink with their feet flat on the ground.
Water line distribution is also critical, as chicks should not have to travel more than three meters to find water and no more than two meters between drinkers and feeders. This is especially important when brooding in the center of the house. As soon as birds are allowed to go to the sides closer to the walls, drinkers in these portions of the house should be lowered immediately.

Air
Though often forgotten as such, oxygen is another critical nutrient for all living organisms. Provide chicks with an atmosphere that has no less than 19.6 percent oxygen. The easiest way to check if there is enough oxygen in a broiler house is by measuring the level of carbon dioxide, which has a direct correlation to the oxygen level. The carbon dioxide concentration should never be above 3,000 parts per million.
Install a minimum ventilation system to ensure that chicks have the correct air quality, as this system will be responsible for removing the air in the chicken house and replacing it with fresh air from the outside. The fan capacity used must be able to exchange the entire air volume in the house in eight minutes (fans needed = house volume/8/single fan capacity). Fans should be operated on a timer with a starting cycle of one minute on, then four minutes off. Air entering the house should be the correct speed and pressure to ensure that it reaches the top of the house where hot air tends to rest. Additionally, make sure there is no air movement over 0.3 meters per second at chick level, to avoid chilling. (Regardless of air temperature, remember that in the first five to seven days, chicks are unable to control their own internal temperature.)

Light
Chicks need a bright environment so that they can easily identify and locate feed and water. The maximum variation in light intensity between the darkest and the brightest spots in the house should be no more than 20 percent. Greater variations will have a negative impact on bird distribution, leading to uniformity and sizing issues. After seven days, it will be possible to start reducing light intensity and providing several hours of darkness to allow birds to follow the natural circadian cycle. However, be sure to always follow local legislation as this may affect your light program.
The above rules are all of equal importance — don’t sacrifice one for the other. For instance, if feed is available but temperatures are off, chicks will either not eat (too hot) or use feed to produce heat rather than for development (too cold). Alternatively, if temperatures are correct but there is not enough feed or water, chicks again will not grow. Or, if oxygen levels are too low, chicks will have little to no activity, as well as less water and feed intake, which leads to less growth.
Chicks have an extraordinary potential for growth and performance, but they need our help and care to reach it. Every extra effort made during their first days, such as providing the correct environment and easy access to good-quality feed and fresh water, will be repaid in excess in the final performance data.