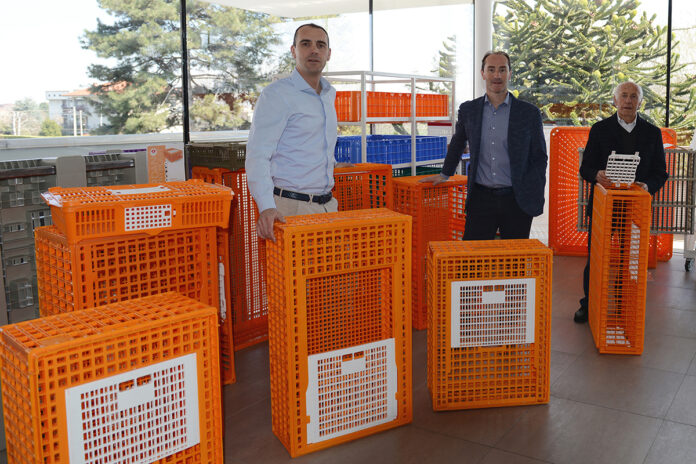 Giordano Poultry Plast, a leading international company in the moulding of plastic materials, specialised in the design and production of poultry industry equipment, is based in Caraglio (CN), Italy, with productions scattered around in Mexico, Argentina, Egypt and Malaysia. The Giordano family has full control of the group made up also by other companies operating in different sectors, with Osvaldo Giordano, Chairman, and his sons Oscar and Enrico, Chief Executive Officers.

Giordano Poultry Plast is an international company that exports 95% of Italian production and carries out its business in over 65 countries. For this reason, too, we spoke with Oscar Giordano, Chief Executive Officer of Giordano Poultry Plast, to discuss how the situation of companies operating in the poultry sector has unfolded itself over the last few months on account of the pandemic.

How did Giordano Poultry Plast organise itself during the Covid-19 period, in terms of both its internal organisation and its relationship with the outside world?

As regards the internal organisation, we obviously had to apply the measures laid down by the State, sometimes even at the last minute: I cannot deny that it has been tough, but we have succeeded in organising ourselves well. Precisely under these circumstances, in fact, we implemented procedures that, though ultimately envisaged, would have perhaps been applied within a few years, accelerated by the contingent situation. We have invested time and money: temperature scanners have been set up at the entrance, with separate entrances and exits, and several improvements have been introduced.

Several of our employees have been engaged in smart working since last spring and will keep on doing so. We have a fixed attendance calendar at the company, to ensure a constant alternation of personnel manning the office at all times, and enable production to operate regularly. The staff at the company premises has been retained in full. Despite the lockdown, we have not stood still even a single day: our Ateco (characteristic activity) code allowed us not to stop production, and notwithstanding some dip in sales at the start, we have bounced back excellently during the summer months.

Meanwhile we have implemented some investments as well. Part of the machines have been replaced and others added; we have become even more automated. To give you a figure, to date, in 2020, we have made investments for approximately EUR 950,000. In the last two years, no profits have been redistributed, as they have been invested entirely in the company, enabling us at present to make use of a pretty new and technological pool of machines, one that will allow us – once normality is restored – to cater more effectively for any need. At the end of October 2020, our turnover is hovering around the same value as the corresponding one from last year, and we think we are going to end this year on a sum close to EUR 26 million. In January-February, we were proceeding at a level of 15% above the same months of the previous year, and then, after the important drop of March/April (up to a 50% dip in turnover), we have rebounded in the following months.

Another aspect we have focused upon during the most acute phases of the pandemic was the reorganisation of company communication: we created monthly news, sending around 14,000 emails every month, and done the restyling of websites, and we are refurbishing the digital catalogues. In just one and a half months, we have revolutionised our communication on social networks in order to implement a weekly rather than monthly plan, meeting our customers online. With our salesforce, too, we arrange virtual meetings every fortnight or monthly, which we find extremely useful in a period in which physical movements are so drastically reduced.

Have you also thought of proposing new products to the market during this period?

We have not developed any completely new product, but we have improved some, like the perches for ducks, creating a novel grid, which, although it might have already been planned, we had previously found no time to implement. The product has also been launched on the market, with all the problems entailed by launching a product through the Internet, without a fair. We have likewise improved the turkey feeder and the ECS, our integrated egg handling system. Essentially, Giordano Poultry Plast has introduced 2.0 products, so to speak: improving those already available on the production line, striving to the attainment of excellence.

This tragic period of pandemic forced us also to reconsider the role of international fairs. What is your position in this regard?

For the first 6 months of next year, Giordano Poultry Plast is not planning any fairs or conferences and will not invest in them. Right now, travelling is too complicated: quarantine periods are required going and coming back, swabs must be performed, and above all, the customers themselves do not desire to receive visits or move around.

Covid-19 has completely transformed the trade fair scenario: we have switched from a period in which fairs were being held incessantly, up to twice a month as well, to none at all at present.

In my view, in 2021 we should restart with 3 or 4 global fairs, truly specific, bypassing local or scarcely attended ones. After all, we were previously travelling for the slightest issues as well, which, as we later found, could be adequately managed by video call. Rather than saying “because of Covid”, we could say “thanks to Covid” we realised that we can do a lot even from our own desk, reducing costs and investing these savings in other activities, perhaps more useful than flying a lot across the world. In future, we will lend preference to the quality of physical encounters, managing the rest of relationships digitally, thereby also increasing the workers’ quality of life. The results will remain the same, but we will move around only for truly important occasions.