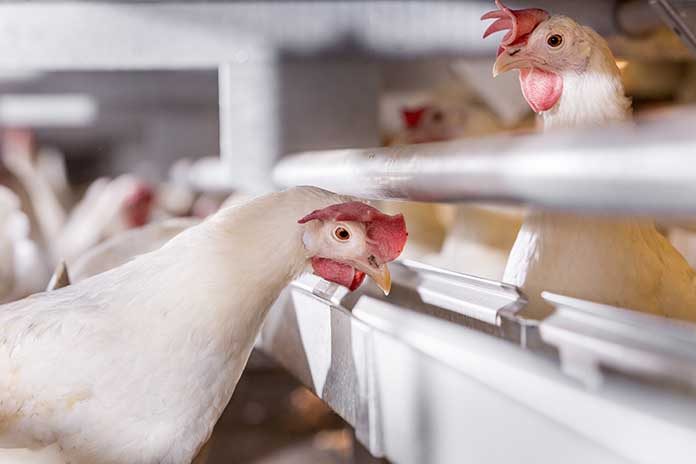 Egg production has an important role in the global production of food. For decades, we have successfully selected laying hens that efficiently produce animal protein in the form of eggs. As the global human population grows, and the contribution of eggs and poultry meat to the world’s diet increases, the environmental impact of food production has become an important sustainability issue.

Although the egg and broiler meat supply chains have relatively low emissions, the scale of both sectors and the rate of growth require a further reduction in emission intensity. The effects of greenhouse gas (GHG) emissions and the depletion of scarce resources, like phosphorus, are a part of today’s discussion on the sustainability of animal protein production to feed the global population, now and in the future.

The production of feed for laying hens contributes to over 69% of emissions in the value chain. This number is partly made up of direct on-farm energy (4%), post-farm processing and transport (6%), and the storage and processing of manure (20%) (MacLeod et al., 2013).

The production of poultry meat has higher feed emissions than those of eggs. This can be partly explained by the higher share of soybean in the bird’s diets. On average, more soybean is sourced from areas where a change in land-use (LUC) takes place. A clear example of LUC is the conversion of forest into agricultural land in the Amazon rainforest. As a consequence, LUC accounts for 21 percent of poultry meat emissions and 13 percent of egg emissions (MacLeod et al., 2013).

Feed production is the main source of GHG-emissions. By selecting for improved feed conversion rate (FCR), e.g. the amount of feed needed to produce 1kg of eggs, we can directly lower the environmental impact of egg production. Besides selecting for improved FCR, we also select birds that can maintain their egg production while eating a diet that contains lower feed quality ingredients, such as by-products or residual flow products. A clear example that our birds can perform well on these diets is the Dekalb White at the Kipster farm. At Kipster, the birds are fed a specially developed feed made from bakery leftovers and other residual flows. This chicken feed consists of about 97% leftovers and 3% of vitamins and minerals. The CO2 footprint of Kipster feed is 50% smaller compared to standard chicken feed.

In Europe, the use of soybean in poultry diets is increasingly under pressure. The poultry industry collectively consumes the most soybean in any livestock sector in Europe (van Gelder et al., 2008). The EU is also heavily reliant on the import of soybeans from South America. The FEFAC 2012 statistical yearbook showed that in 2012, the European self-sufficiency of soybean meal was only 3%, while it accounts for 64% of the protein-rich feed materials (De Visser, 2014). Soybean meal is a major source of the essential amino acid lysine, which, after Methionine, is the second limiting amino acid. Next to the negative impact on the change in land-use in South America, the dependence on imports makes the EU exposed to unexpected changes in feed prices and ingredient scarcity. At the moment, the existing substitutes for soybean products in the European poultry diets are rather limited, the production of soybean in Europe is insufficient, and there has not been much progress in scaling up production.

There is no doubt that insect meal is suitable for the feeding of poultry from a nutritional perspective (Józefiak and Engberg, 2015). However, there are still some barriers present to utilize insect protein in poultry diets. Under EU regulations, insect protein is classified as processed animal protein (PAP) and is not allowed to be used in livestock feed. The international platform of insects for food and feed (IPIFF) is an EU non-profit organization that promotes the use of insects for human consumption and insect derived products as a top tier source of nutrients for animal feed. With their presence, insect protein may soon be allowed in poultry diets.

In the future, the impact of animal production on the environment and available feed protein sources will become even more important than as it already is today. It is important to breed birds that are healthy and efficient. By selecting birds based on their feed conversion ratio and ability to thrive while eating sustainably formed feed, the resulting protein will contribute to a more innovative and sustainable food chain.