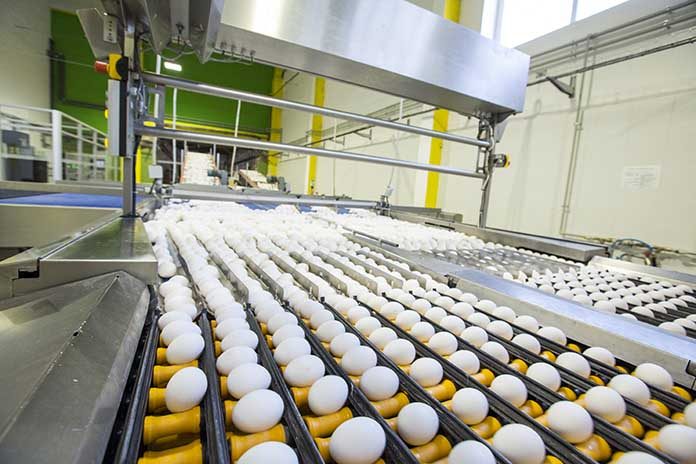 In this paper, an overview will be given on the development of the laying hen inventories and of egg production between 2007 and 2017. More recent data sets will not be available before the end of this or the beginning of next year. The data in Table 1 shows that the laying hen inventories of the Americas increased by more than 200 mill. hens or by 20.3 %. Despite this remarkable growth, the share in the global inventory decreased from 16.5% in 2007 to 15.4% in 2017, indicating an even faster growth in other parts of the world. With the exception of South America, all other sub-regions lost shares in the analysed decade. This reflects the remarkable increase of the inventories in South America by 34.7%. In the Caribbean (+ 9.7%) and Central American countries , (+ 14.2%) the inventories also grewmuch faster than in North America, where only 9.4% was reached. Egg production in the Americas grew by 3.4 mill. t or 28.1% between 2007 and 2017 (Table 2). The growth rate was lower than at the global level where 31.5% was reached. This again documents the faster increase in parts of Asia and Africa. In 2017, Latin American countries shared 56.9% of the total egg production of the American double-continent. Parallel to the dynamics in the laying hen inventories, South America showed the highest relative growth with 49.6%, followed by the Caribbean with 25.7 % and the Central American countries with 22.4 %. The relative increase in the two North American countries was considerably lower with 17.5%.
Egg production in North America increased, however, faster than the inventories, indicating the higher efficiency of egg production in Canada and the USA. While in North America almost only hybrid strains with high laying rates are used, in almost all Latin American countries local or regional strains with a much lower laying rate are still producing in backyards of small farms parallel to hybrid herds in market-oriented companies. With a relative growth rate of 37.5%, egg production in Latin America grew faster than at the global level where 31.5% was reached. This is mainly a result of the remarkable increase in South America. In this sub-region, the production volume grew by 1.78 mill. t or by 49.6%. But also in the other two sub-regions high relative growth rates were reached with 25.7% in the Caribbean countries and 22.4% in the Central American countries. South American countries shared almost 60% in the overall production volume of Latin America and contributed 72.5% to the absolute growth in the analysed decade.

Dynamics differ at country level
A detailed analysis of the dynamics in the laying hen inventories and in egg production at country level reveals considerable differences. It also shows a high regional concentration. Table 5 documents the development of the laying hen inventories in the ten leading countries between 2007 and 2017. A closer analysis of the data shows that the highest absolute growth rates were to be found in Brazil (79 mill.), Mexico (+ 21 mill.), Colombia (+ 19 mill.) and Argentina (+ 15 mill.). The highest relative increase showed Bolivia (+ 69.2%), Colombia (+ 58.0%) and Peru (+ 54.0%). Regarding the development of the share in the total laying hen inventory in the Latin American countries, Mexico, Chile, Cuba and Venezuela lost shares, all other countries gained shares. Mexico lost 3.5% of its share in the analysed decade, a result of several outbreaks of the Avian Influenza virus. The downward trend in Cuba and Venezuela is a consequence of the lasting economic problems. The regional concentration was already very high in 2017 and even increased in the following decade. The negative trend in Mexico was compensated by the dynamical development in Colombia, Argentina and Peru.
The development of egg production in the ten leading countries between 2007 and 2017 is documented in Table 6. As was to be expected, the share of the ten leading countries in egg production in the total production volume of the Latin American countries was almost identical with that in the laying hen inventory. A closer look at the date reveals considerable differences at country level. The share of Mexico in egg production is much higher than in the laying hen inventory.
The opposite is the case in Brazil. Quite obviously, the efficiency of production is much higher in Mexico. While in the market-oriented egg companies in Mexico modern housing systems, hybrid hens with high laying rates and high-quality compound feed is used, in Brazil many backyard flocks with local breeds and less efficient feed are in production. In most of the other countries, the share in egg production is also higher than in the laying hen inventories. Despite the high efficiency, Mexico´s share in the overall production volume of the Latin American countries decreased by 4.2% in the analysed decade due to the negative impacts of the Avian Influenza outbreaks.
Lower shares could also be observed in Venezuela and Guatemala even though their production volume increased. Because of the fact that egg production grew in all ten leading countries, the regional concentration increased from 91.7% to 92.5%. The share of the two leading countries decreased, however, from 62.4% in 2007 to 59.3% in 2017

Summary and perspectives
The preceding analysis could document the remarkable dynamics in the laying hen inventories and in egg production in Latin America. Growth rates in the three sub-regions were higher than in the two North American countries. It is worth noting that Mexico´s share in egg production was much higher than in in the laying hen inventories, a result of the high efficiency in the vertically-integrated companies. The opposite is the case in Brazil because of a considerable amount of small farms with backyard flocks. Nevertheless Brazil was able to increase its share in the total production volume of the Latin American countries.

Avian Influenza outbreaks have been a problem so far only in Mexico. The virus is a permanent threat to the poultry industry in this country despite a vaccination program. It can be expected that also in future outbreaks will occur because the virus is endemic in the centers of production. Only a change in the spatial pattern of production and a new start in states with a low poultry population might be a solution to this problem.
The increasing population and a higher purchasing power of a growing middle-class will result in a higher egg demand. However, political and economic instability in some countries may lead to lower absolute and relative growth rates.