Egg production plays an important role in the Spanish poultry industry and in agriculture (Table 1). A closer look at the development between 2010 and 2020 reveals that towards the end of the past decade, the contribution to total animal production and agriculture decreased. 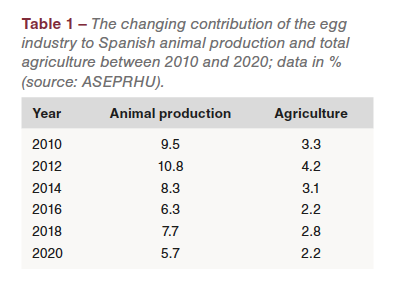 One reason for the declining value of egg production is the fast growth of the swine industry, which in 2020 reached a share of 42.8% in animal production and of 16.4% in total agriculture; a second, the impacts of the Covid-19 pandemic. The strong fluctuation is also due to the necessary transformation of housing systems because of the banning of conventional cages in the EU from 2012 on. 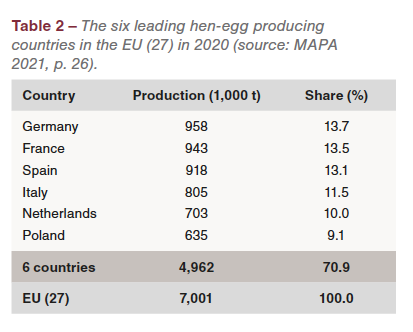 In 2020, Spain ranked in third place behind Germany and France in egg production with a share of 13.1% in the EU (27) production volume (Table 2). In a later part of the paper, the extraordinary dynamics since 2010 will be documented.

Considerable fluctuation in the laying hen inventory and in housing systems

As in all EU member countries, the banning of conventional cages from 2012 on caused considerable fluctuations in the laying hen inventory and in the housing systems for laying hens also in Spain. 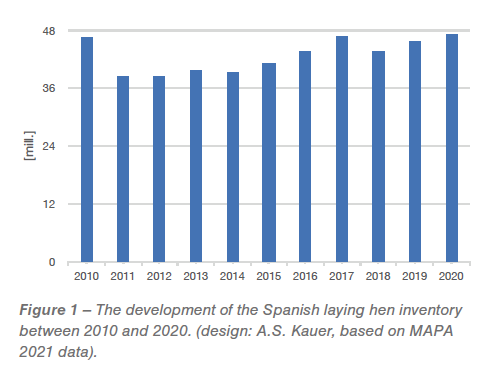 Figure 1 documents the decrease of the number of laying hens from 46.6 mill. birds in 2010 to 38.4 mill. in 2012, a result of the necessary change in the housing systems. In 2010, 81% of the hens were still kept in conventional cages and only 14% in enriched cages. In the following years, a stepwise transformation had to be realised. In 2020, enriched cages were the dominant housing system with a share of 78%. Barn and free-range systems followed with 13% respectively 8%. As in most Southern European countries, organic systems were still only of minor importance. The transformation of the housing systems took six years and it was not before 2020, after two years of a reduction, that with a new maximum of 47.1 mill. hens, the inventory of 2010 was surpassed (Figure 2). 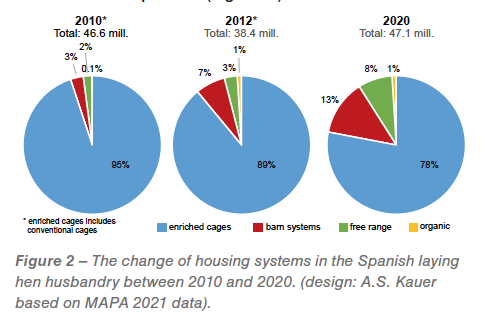 The transformation of the housing systems with changes of the inventories resulted in a considerable dynamics in egg production (Table 3, Figure 3). 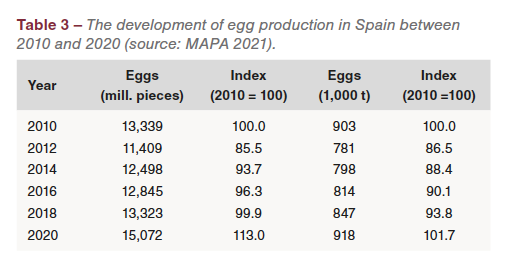 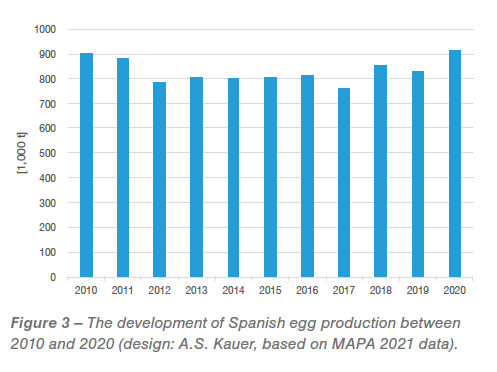 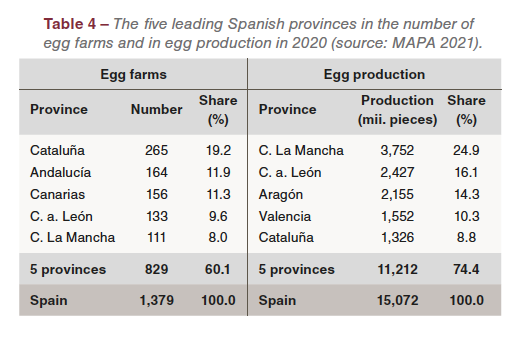 From the data in Table 4 one can easily see that the regional concentration in the number of egg farms and in egg production differed considerably.

While only 8.0% of the Spanish egg farms were located in Castile La Mancha, they shared 24.9% in egg production. On the other hand, 11.3% of the egg farms were located on the Canary Islands, but they only shared 2.4% in egg production. It is obvious that the farms in Castile La Mancha were much bigger than in the other provinces and that with as share of together 41% the two Castile provinces are the centre of the Spanish egg industry.

Spain is one of the leading egg and egg products exporting countries. In 2020, it ranked in fourth place with shell eggs for consumption exports and in third place with egg products. 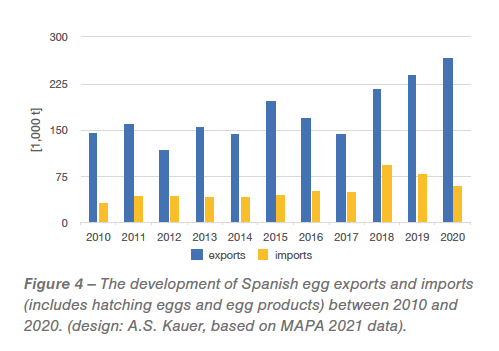 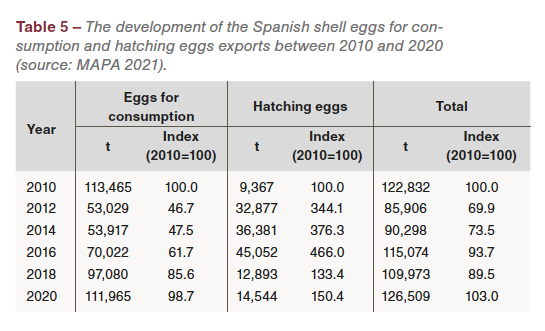 During the transformation, exports of shell eggs for consumption declined rapidly because of empty farms. To compensate for the economic losses, exports of hatching eggs gained in importance, as no chicks and pullets could be placed (Table 5). As soon as the transformation was completed and the farms were filled again, the exports of hatching eggs declined very fast, and eggs for consumption exports increased. Nevertheless, they were still lower than in 2010. 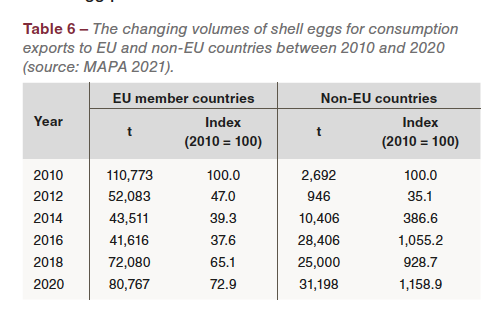 It is worth noting that during the transformation process the trade flows to EU member countries and non-EU countries changed considerably (Table 6). In 2010, only 2.4% of the eggs were exported to non-EU countries, in 2020 their share was 27.9%. Parallel to the increase of hatching egg exports, exports of egg products also grew considerably, as eggs, which were produced in conventional cages during the transformation, could still be sold to the egg processors. 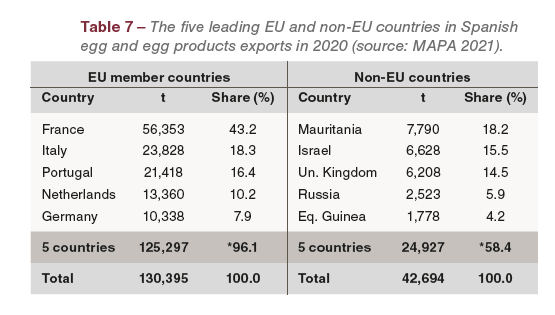 Egg imports were only of minor importance in comparison to exports. About 70% came from France and Portugal. Hatching eggs were mainly imported from Germany, the USA and the Netherlands. 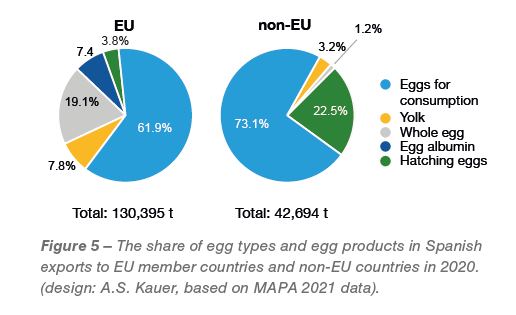 The preceding analysis showed that the transformation of the housing systems for laying hens had far-reaching impacts on the Spanish laying hen inventory, on egg production and egg exports. The banning of conventional cages from 2012 on was a severe challenge for egg farmers as in 2010 still 81% of the hens were kept in conventional cages. The enforced transformation to alternative housing systems not only caused a sharp reduction of the laying hen inventory but also of egg production. The export volume of shell eggs for consumption decreased dramatically within a few years. To compensate for the economic losses, more hatching eggs and egg products were exported. Even in 2020, the volume of shell egg for consumption exports had not reached the value of 2010 again. 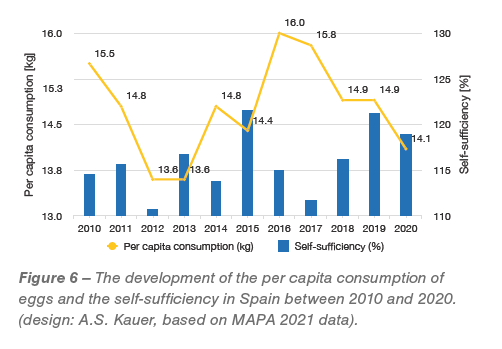 The strong fluctuation in egg production and egg exports caused considerable changes in the egg prices for the consumer and resulted in changes of the per capita consumption and the self-sufficiency rate (Figure 6). The Covid-19 pandemic and the lockdown caused a sharp reduction of tourists and of the domestic egg demand. The decrease could, however, be compensated by higher exports. With increasing tourism and a higher domestic demand, the export volumes of eggs and egg products my decline in this and the next year.