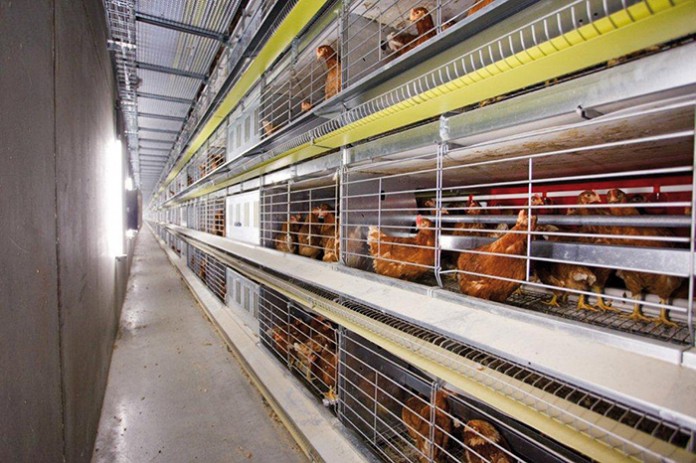 The ban on the conventional battery cages in the EU was the starting point for the necessity to develop various alternative management systems for layers.
In compliance with all the legal requirements (Council Directive 1999/74/EC of 19 July 1999 laying down minimum standards for the protection of laying hens) Specht has developed in the course of the last years three systems in order to meet with the different needs of the poultry farmers:

Enriched Cage (so called German small aviary):
The birds (43 in the EU; 36 in Germany) share a closed installation. The Specht group cage is a system already tested in practice for many years. In fact since 1994 this system has been delivered to countries all over the world as a group cage for layer breeders. According to the EU regulation, this installation provides the birds with 750 cm² area per hen (min. 600 cm² of which is usable area), a separate nest, a littered area, appropriate perches with at least 15 cm per hen, claw shortening devices, sufficient nipple drinkers and a minimum of 12 cm feed trough per hen. The nest is located between the bird sections. It is designed as a family-roll-off nest of 60 x 60 cm. The section length is 2,40 m, the profundity 1,20 m.
The feeding is done by means of feed hoppers, just like in the conventional layer batteries. Also the manure removal, the egg collection and the manure cross removal correspond to the systems used in the Specht layer batteries – i. e. tested in practice for many years.

Aviary System:
The Specht aviary follows the same construction system as the Specht cage equipment, but without doors; thus the birds can move freely in the whole house.
Feeding (chain feeding system) and drinkers are integrated in the equipment as well as perches and nests. The last ones are situated on a separate nest tier (for example in the case of equipments with 3 tiers on the middle tier). As to construction and function, the nests are identical to the automatic Specht layer nests. Series of tests have demonstrated that almost all the birds frequent the Specht nest in order to lay their eggs there. Thus the quantity of eggs laid outside the nest, is reduced to a minimum which is more than acceptable. The small number of displaced eggs rolls in the Specht aviary into a kind of receiver channel which has been created specially for this purpose and where the birds cannot reach the eggs any more because of a cover sheet installed there. Of course, the Specht aviary system fulfils all the legal requirements for alternative systems. “Varia-System”:
In the daily conversation with many customers, Specht staff often perceived their uncertainty in view of the necessity to take a decision – group cage or aviary system – as it was not clear about what would have been the best way for them – particularly in view of the possible changes in the future consumer demand. This inspired Specht technicians to the development of an equipment, which is quasi a kind of symbiosis of the above indicated systems: the Varia-System is an installation which can be used as a closed group cage or as an open aviary system – depending on what the customer wants. The modification from one into the other system is always possible –without any problems.
The Specht Varia-System is equipped with feeding systems (chain feeding system), nipple drinkers, nests and perches on each tier. The nests, which have been designed as family-roll-off nests, are situated close to the egg belt – this guarantees a “short way” for the eggs and therefore minimal quantities of displaced eggs.
When using it as an aviary, the Varia-System allows an optimal stocking number of 18 birds/m². When used as a group cage the Specht Varia accommodates space for 48 birds (according to the EU regulation).