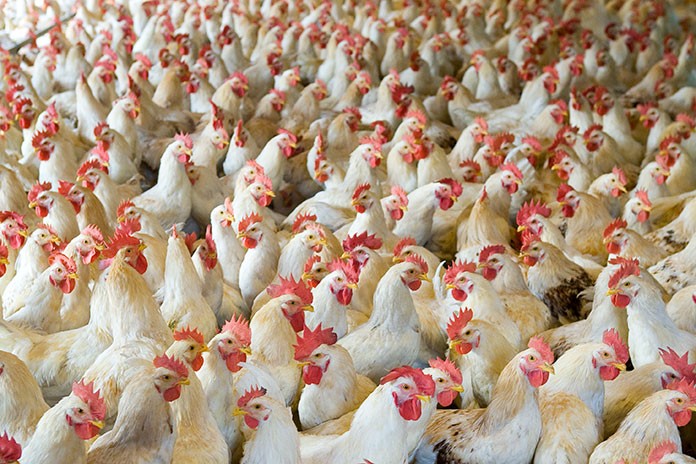 The Netherlands hold an exceptional position in European egg and poultry meat trade. In 2013, they contributed 41.4 % to the shell egg exports of the EU and 23.6 % to the poultry meat exports. For many years the Netherlands have been the leading egg exporting country with a share of 12 % of the global export volume in 2012. The main goal of this analysis is to document the changing sectoral and regional patterns of the Dutch poultry industry as well as of the trade with poultry products.

The dynamics of production
Low contribution to the value of agricultural production despite high export volumes
It is of importance to realise that the contribution of the poultry industry to the overall value of agricultural production is low compared to the value of milk and pork production. In 2012, more recent data are not available, poultry meat and eggs only contributed 4.9 % to the value of agricultural production, much less than the 15.7 % of milk and dairy products and the 11.1 % of live pigs and pig meat. The picture changes considerably, however, when the export values of poultry meat and eggs are compared to other animal products. In 2012, the value of exported animal products reached a volume of 14.6 billion €. To this poultry meat contributed €, 2.6 billion € and eggs 900 mill. €. With a share of 24.0 % poultry products reached a much higher share in the export volume than in production with only 12.5 %. These data document the importance of the egg and poultry meat exports for the Dutch economy and the trade balance. As will be shown later, the trade relations with Germany are decisive for the dynamics of the Dutch poultry industry.

Fast sectoral concentration in poultry farms
Since 2000, the number of poultry farms in the Netherlands has been decreasing very fast. A massive reduction was caused by the outbreaks of the Avian Influenza (AI) in 2013, which affected 255 farms and about 30 mill. birds. It is obvious that several poultry producers decided to quit poultry production after the considerable financial losses they had to face.

Table 1 shows that after the dramatic decrease between 2000 and 2003, a short recovery period could be observed, but then the consolidation process speeded up again. This is closely related to lasting low egg prices and a considerable reduction of egg exports to Germany. In contrast the situation in broiler production has stabilised. The decrease of turkey farms was extremely high. In 2014, only one third of the farms of 2000 were left. The closing of the last remaining turkey slaughterhouse in the Netherlands has obviously added to this development. Figures 1 and 2 shows that layer farms are concentrated in the four eastern provinces of Gelderland, Noord-Brabant, Limburg and Overijssel. In broiler production, it is the provinces of Noord-Brabant, Overijssel, Friesland, Drenthe and Gelderland. The centres of production are obviously located outside the urban agglomerations in the western part of the country and close to the German market. ocks is due to the fact that several broiler farms are also located in the north provinces where only a few AI outbreaks occurred and to the shorter growing cycles which made it possible to place new chicks after the disinfection of the barns and to increase production much faster than in layer farms. The dynamics in the layer and broiler flocks has to be explained in more detail.

Because of the banning of conventional cages for laying hen husbandry in Germany two years earlier than in most other EU member countries, the self-sufficiency rate dropped to only 55 %. To meet the demand, almost 9 billion shell eggs had to be imported: 5.8 billion from the Netherlands. This resulted in a fast expansion of the laying hen population, especially in barn systems, as the leading German food chains had decided to no longer list eggs with the Printing “3” which stands for all types of cages, also for enriched cages. But when the transformation of the housing systems in Germany was completed faster than expected and the self-sufficiency rate reached 71 % again, imports from the Netherlands were reduced considerably which resulted in smaller layer flocks. When, however, the number of layers increased again in 2013, the oversupply of eggs in the EU led to lasting low egg prices. The growing number of broiler places after 2006 is due to the increasing demand for poultry meat, not only in EU member countries but also in Africa and Asia. The high regional concentration of poultry farms is reflected in the spatial distribution of the poultry flocks as can be seen from the data in Table 3 and Figures 3 and 4. Of the total number of laying hens almost two thirds were concentrated in the three leading provinces, Gelderland, Limburg and Noord-Brabant. A similar concentration was to be found in broiler production. Here, Noord-Brabant with a share of 33.2 % was in an absolutely dominating position. Egg and poultry meat production are growing again
Table 4 shows that egg production decreased by 25 % between 2000 and 2003. It was not before three years that the former production volume was reached again, after that a phase of continuous growth began. But the Netherlands did not reach a share of 12.2 % of the EU production volume again because of the dynamics in other EU member countries. The self-sufficiency rate is still higher than 300 %, which explains the domination role of the Netherlands in global egg trade.

High dependence of the Dutch egg industry on German imports
Over the past decades very close trade relations have developed between the Netherlands and Germany in egg and egg products exports and imports. From the data in Table 7 one can easily see that the AI outbreaks in 2003 led to a drastic reduction of the shell eggs for consumption exports. Between 2000 and 2003 the export volume decreased by 116,000 t or 36.5 %. It was not before several years that the former export volume was reached again. The export surplus fell below 100,000 t in 2003, but was 1.5 % higher than in 2000.

A closer look at the export flows reveals the role of Germany as the most important country of destination for the shell eggs for consumption exports (Table 8). The share of Germany increased from 64 % in 2000 to 79 % in 2010 and then fell back to 71 %. The fluctuation is a result of the earlier banning of conventional cages in Germany which led to a drop of the self-sufficiency rate to only 55 %. The Netherlands could increase their export volume to the eastern neighbour by 1.3 billion eggs. After the end of the transformation process, the German egg imports decreased considerably which led to an egg surplus in the Netherlands and to lasting low prices for the egg producers.

The Dutch egg industry is heavily dependent on egg exports to Germany, but on the other hand, Germany needs the imports from the Netherlands to meet the domestic demand. For a short time, Spain, Poland and France stepped in. Presently, about 74 % of the German imports come from the Netherlands. For 2013, the Dutch Centraal Bureau voor de Statistiek has not published data regarding the export volumes by countries of destination, but data on the export values. Table 9 shows that Germany here was also in an unchallenged leading position with a share of 69 % of the overall export value. In the following places ranked Belgium, Italy and Switzerland. It is obvious that the Dutch egg exporters try to develop new market in Asia and Africa. High export surplus also in poultry meat trade
The decrease of poultry meat production as a consequence of the AI outbreaks in 2003 is reflected in the development of the export volumes. But the exports decreased by only 61,000 t or 8.4 % between 2000 and 2003. The different spatial distribution of layer and broiler farms as well as the earlier possibility of the broiler farms to place chickens after the end of the outbreaks explain the much lower impact compared to egg exports. But after several years with high absolute growth rates a plateau of the export volume seems to have been reached from 2012 on, nevertheless, the export surplus increased because of lower imports. The close trade relations between the Netherlands and Germany could already be documented in the analysis of the shell egg trade. A similar situation shows the trade with poultry meat. A comparison of the data reveals that the Netherlands are to a lesser degree dependent on exports to Germany than Germany on imports from the western neighbour. The considerable differences in the data cannot be dissolved as they are already to be found in the original data sets. This is a result of the incomplete coverage of the intra-EU trade.
In 2013, 25.8 % of the Dutch poultry meat exports went to Germany and Germany imported 42.9 % of the total poultry meat from the Netherlands. In 2013, the Netherlands exported 1.052 mill. t of poultry meat of which 801,100 t or 76.1 % remained in EU member countries, while 250,960 t or 23.9 % were delivered to non-EU countries. The most important countries of destination in the EU were Germany and the United Kingdom, while Hong Kong, the Democratic Republic of Congo and the Russian Federation in the non-EU countries. It is obvious that the Netherlands try to develop new markets in Eastern Europe, Africa and Asia because of the oversupply with poultry meat in the EU. Here, however, they have to compete with Brazil, the USA and Thailand. As no data are published on the export volumes of poultry meat by species, only overall data for this commodity can be presented. As broiler production is absolutely dominating in poultry meat production and because of the high self-sufficiency rate it can be assumed that mainly broiler meat was exported.

The Author is Scientific Director of the Science and Information Centre Sustainable Poultry Production (WING), University of Vechta, Germany (www.wing-vechta.de)