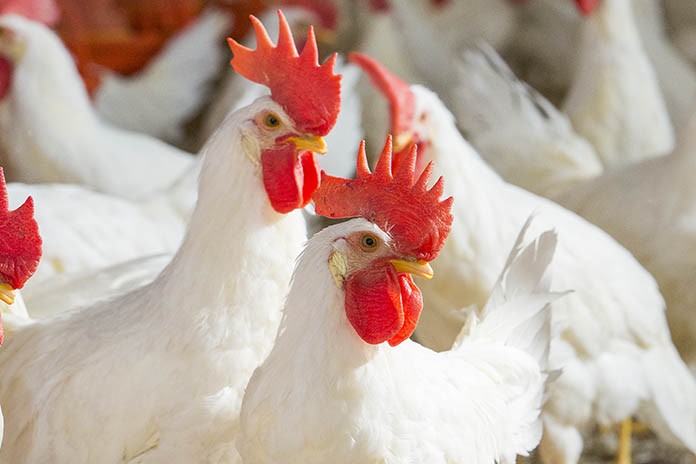 Maize and wheat are a major source of energy in broiler diets. Generally, wheat-based diets are offered to broiler chickens in Europe, Australia and New Zealand while maize-based diets are widely used in the US and Asia.
Studies have demonstrated that dietary cereal source have a significant influence on bird performance however the type of cereal used has received little attention as a factor affecting chicken meat quality. Del Puerto et al. (2016) reported that dietary cereals may affect pH and colour of meat. Moreover, Kennedy et al. (2005) have shown that while meat from birds fed maize-based diets may benefit from dietary vitamin E supplementation to improve the sensory value of meat, there was no advantage in supplementing wheat-based diets.
This observation suggests a gap in the meat quality between the two cereal types. Therefore, the objective of this study was to measure some meat quality and growth performance parameters of broiler chickens offered diets where maize or wheat provided the major energy source.

Materials and methods
All procedures used in this study were approved by the Animal Ethics Committee of University of Sydney. Experimental birds were housed in battery cages. Broilers (Ross 308, male) were placed on a common wheat-based standard starter diet until day 10. From 10 to 17 days and from 18 to 38 days, broilers were offered grower and finisher diets respectively which were based on either maize or wheat as a principle source of carbohydrate, and satisfied all nutrient requirements as suggested by the breeder manual. All experimental diets provided similar calculated metabolizable energy (ME kcal/kg) and crude protein (%).
Energy levels were adjusted with soybean oil and digestible amino acid levels with soybean meal, canola meal and synthetic amino acids. Exogenous enzymes were not included. Chicks had ad libitum access to water and feed. Average individual body weights (BW) and average daily gain (ADG), and cage average daily feed intake (ADFI) and feed conversion ratio (FCR) were recorded on a weekly interval. The FCR values were corrected for the body weight of any bird that died during the course of the experiment.

At 38 days of age, birds were killed according to the recommendations for euthanasia of experimental animals. Meat quality was determined on 1 bird per cage. Drip loss was determined by the weight difference of suspended Pectoralis muscle samples stored at 4°C at 0, 24, 48 & 72 h post-slaughter. Meat colour change was determined daily over 7 days using the CIELAB method for lightness (L*), redness (a*) and yellowness (b*) in the Pectoralis muscle using a Minolta Lab CR-10 colourimeter.
The pH was determined at 0 and 1 day of post mortem in the Pectoralis muscle using a glass electrode (TPS ionode) attached to a portable pH meter (TPS LC80A pH-mv-TEMP) which is temperature compensated. Shear force value of Pectoralis muscle was determined with a Warner Bratzler Shear attachment on a Stable Micro Systems TAXT2 Texture Analyser.
Data were analysed using the generalised linear model procedure of SAS. Meat colour data were analysed by repeated measures using the mixed procedure of SAS. The experimental units were pooled cage means for growth performance and 1 bird per cage for meat quality. Data are presented as least squared means ± standard error of the mean (SEM). Differences were considered significant at P < 0.05. The effects of feeding wheat and maize-based diets on growth performance are presented in Table 1 and meat quality is presented in Figure 1 & 2 and Table 2. Dietary cereals had no effect on body weight (BW), average daily gain (ADG), feed conversion ratio (FCR), and average daily feed intake (ADFI) of broilers chicken from 10-17 and 17-24 d of age. Similarly, BW and ADG of birds from 25 – 38 days of age were not influenced by wheat or maize-based diet, but the birds fed on maize-based finisher diet had lower FCR (P<0.001) and ADFI (P<0.001) compared to those offered wheat-based diets. These outcomes are in agreement with Peng et al. (2003) who stated that a maize-based diet significantly improved FCR when compared with a wheat-based diet. There was no significant effect of dietary cereals type on mortality rate of broiler chicken over the entire growth period.

The breast meat of broilers offered the maize-based diet had a higher drip loss rate than the wheat-based diet (P<0.05; Figure 1). These results are confirmed by Ao and Choct (2004) who reported that wheat-based diet fed group of birds had a lower drip loss value than the maize. An increase in drip loss in the maize-fed group also agrees with the observations of Kennedy et al. (2005) who observed an improvement in the eating quality of maize-fed, but not wheat-fed chicken meat when supplemented with vitamin E. In contrast, the yellowness (b*) value (Figure 2) of meat from maize-based diet was (P < 0.001) higher than the meat from wheat-fed birds which might be because of pigments (carotene and xanthophylls) present in yellow maize. In this study, the shear force value of breast meat was not (P > 0.05) influenced by dietary wheat or maize. These results are in disagreement with Lyon et al (2003) who got significantly higher shear force value in meat from wheat-based diet compared with maize diet.
Similarly, dietary cereals had no significant effects on the pH value of breast meat. These findings are supported by Perlo et al. (2010); Osek et al. (2010); Garcia et al. (2013) who did not notice any significant effect of dietary cereals on pH value of broiler chicken meat.

Conclusion
To our knowledge, there has been little research conducted to evaluate the response of meat quality to broiler diets based on maize or wheat. In this study, birds fed wheat-based diets had poorer feed efficiency and higher feed intake in the final week (from 25-38 days of age) only.
Meat from maize-based diets was more yellow whereas birds offered a wheat-based diet had more red and lighter-coloured meat and a higher water holding capacity. The results of this study indicate that variations in dietary cereal use as a major carbohydrate may be related to differences in meat quality properties. Further evidence is merited exploring the evidence and explanation for variation in meat quality between diets based on these major cereals.

From the Proceedings of the 2017 Australian Poultry Science Symposium