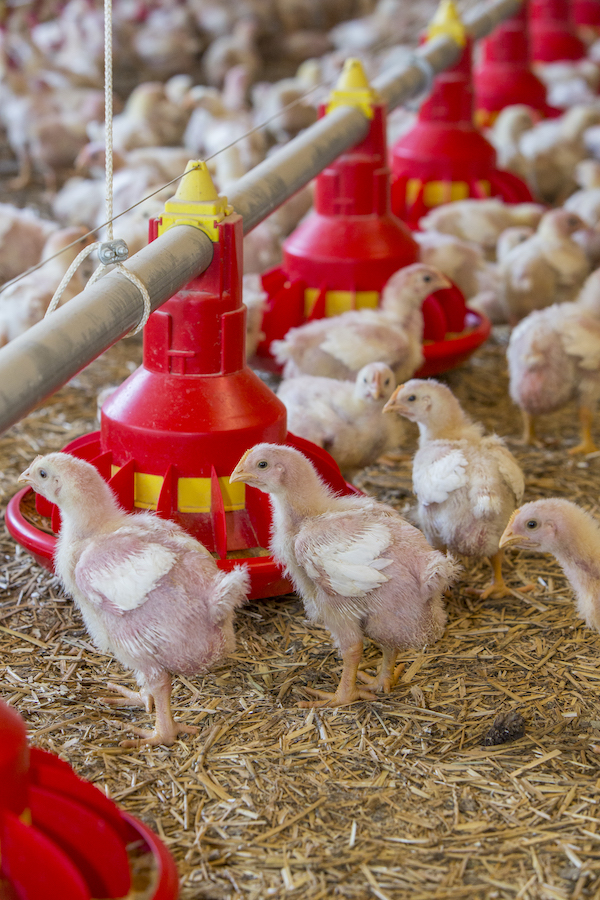 Six groups of broiler chickens aged 0-7, 7-14, 14-21, 21-28, 28-35 or 35-42 post-hatch, were utilised. Four experimental diets with the same inclusion (957 g/kg) of either of the grains were developed in pellet form. Each diet was randomly allocated to six replicate cages in each age group, and excreta were collected over the last 4 days of each period. Bird age had a significant (P<0.001) effect on AME and AMEn of all cereal grains. The AMEn of wheat declined quadratically (P<0.01) with advancing age, from 14.48 MJ/kg in week 1 to 13.47 MJ/kg in week 2 and then plateaued. The AMEn of sorghum grain declined linearly (P<0.001) with advancing age, from 15.74 MJ/kg in week 1 to 14.88 MJ/kg in week 6. Age quadratically affected the AMEn of barley (P<0.001) and maize (P<0.05), where the AMEn declined by 1.25 MJ/kg in barley and 0.66 MJ/kg in maize from week 1 to week 2 and then increased. In conclusion, the present results showed that broiler age has substantial impact on the AME and AMEn of cereal grains and the effect varied depending on the cereal grain.

Cereal grains such as wheat, sorghum, barley and maize are commonly used in poultry diets as the main source of energy. Knowledge on the metabolisable energy content of cereal grains is critical for their efficient use and precise poultry feed formulation. Despite several limitations, the AME has been the globally accepted system for describing the dietary energy content for poultry.

Modern, commercial broiler diets are formulated to use AME or AMEn values of feed ingredients from reference tables or equations. Most published data on the AMEn content of feed ingredients have been generated with either adult cockerels or older broilers (typically 5-week old) and are widely used in feed formulations for all the phases of broiler’s growth. However, this practice overlooks the potential effect of bird age on the AMEn content of feed ingredients. Furthermore, bird age has been shown to have a substantial effect on the digestion and absorption of energy-yielding nutrients. Birds at different ages have variable ability to digest and metabolise feed ingredients especially those containing anti-nutritive substances such as soluble non-starch polysaccharides. Moreover, the capacity of digestive tract to digest and absorb nutrients is limited during the early life of broilers and, there is a consensus that the nutrient digestibility generally increases with advancing age.

The relevance of using a single value of AMEn obtained with older birds to all growth phases, especially the early life, of broilers is questionable and highlights the need for age- dependent estimates for use in feed formulations. All previous studies on age-related responses have been conducted on grain-based complete diets. To our knowledge, no published data are available on age effects for the AMEn of single cereal grains. Therefore, the aim of this study was to investigate whether the age of broiler chickens has any effect on AMEn of commonly used cereal grains (wheat, sorghum, barley and maize) using the direct method by the total excreta collection.

Four cereal grains (wheat, sorghum, barley and maize) were obtained from local commercial suppliers. The wheat and sorghum samples were of Australian origin, and maize and barley were sourced from New Zealand. The AME and AMEn of the cereal grains were determined using the direct method. In this method, four basal diets were formulated to contain the same inclusion level (957 g/kg) of each grain, and fortified with macro minerals, vitamin and mineral premixes. Diets were mixed in a paddle mixer and then pelleted.

Day-old male broilers (Ross 308) were obtained from a local hatchery and raised on floor pens until assigned to the experimental treatments weekly. Birds were fed broiler starter mini pellets until day 21 and finisher pellets from day 21 to 35. At the beginning of each week (days 0, 7, 14, 21, 28 and 35), birds were weighed individually and allocated to cages so that the average bird weight per cage was similar at each week.

For each cereal grain, the assay diet was fed to six replicate cages of broilers during six periods, namely days 0-7, 7-14, 14-21, 21- 28, 28-35 or 35-42. Each replicate cage housed 10 birds during week 1, and 8 birds during weeks 2 to 6 post-hatch. The AME was determined using the total excreta collection procedure. For each week, diets were fed for 7 days with the first 3 days serving as an adaptation period. The feed intake and total excreta output for each replicate cage were recorded over the last 4 consecutive days of assay. Daily excreta collections were pooled within a replicate cage, mixed in a blender, sub-sampled and lyophilised. Dried excreta samples were ground to pass through a 0.5-mm sieve and, the diets and excreta samples were analysed for dry matter, gross energy (GE) and nitrogen (N). The AMEn was calculated by correction for zero N retention by assuming 36.54 KJ per g N retained in the body as described by Titus et al. (1959). The data were analysed using the General Linear Model procedure of SAS Institute, 2015. Orthogonal polynomial contrasts were performed to determine the linear and quadratic effects of broiler age. 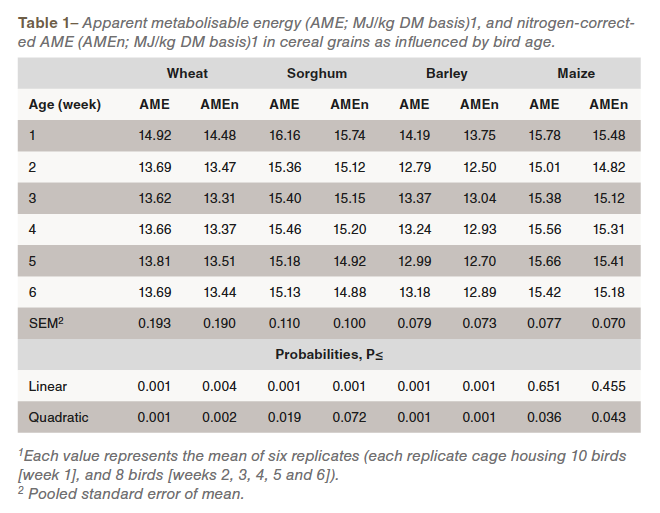 The paramount motive for this study was to investigate whether the age of broilers will (i) influence the metabolisable energy content of common cereal grains, and (ii) whether the effect, if present, is similar for all grains. Predictably, the AME and AMEn values of cereal grains were influenced by bird age, regardless of the cereal type. While the highest AMEn values were observed at the first week for all cereal grains, the AMEn declined, either linearly (sorghum) or quadratically (wheat, barley and maize). It has been documented that, due to the under-developed digestive tract and limitation in digestive enzymes required for nutrient digestion, the utilisation of major nutrients is low in the newly hatched chick but increases with age. In contrast to the current findings, some studies have shown a lower metabolisable energy during the first few day’s post-hatch followed by an increase after the first week. Thomas et al. (2008) reported that AMEn of a maize-based diet was higher at day 3 (13.87 MJ/kg), then declined by 1.59 MJ/kg to 12.28 MJ/kg at day 7, and increased to 13.01 MJ/kg by 14 days of age. These researchers reported similar trends for wheat- and sorghum-based diets. However, in agreement with current findings, Moss et al. (2020) reported higher AME:GE ratios in young broilers (7-9 days) than older broilers (33-34 days) in diets based on wheat (0.799 vs. 0.765), sorghum (0.782 vs. 0.713) or maize (0.796 vs. 0.785). 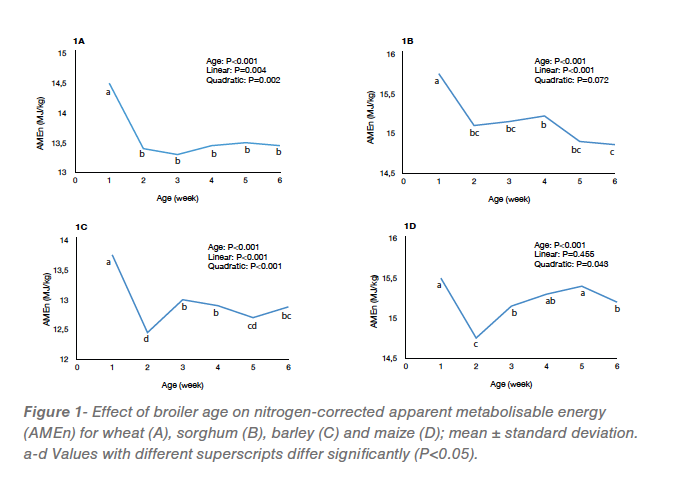 The higher AMEn during the first week post-hatch may be due partly to the beneficial effect of the yolk sac. During the first week post-hatch, chicks undergo metabolic adaptations while moving from embryonic yolk dependence to rely on obtaining and utilising nutrients from a complex dietary source. Additionally, the digestive tract of the hatchlings is sterile and is rapidly colonised by microflora after hatching. Gut microflora contains various bacterial species that consume energy for their rapid growth and colonisation. These factors may contribute, at least in part, to the subsequent decline in the dietary energy utilisation and is supported by the lower AMEn recorded in week 2 in the present study. After the second week of age, AMEn of ingredients either remained unchanged or increased, the latter of which could be reflective of the increase in digestive and absorptive capacities of the intestine enabling birds to extract more nutrients from feed.

Overall, the current findings suggest that, regardless of cereal type, age of broilers has substantial impact on AME and AMEn values of cereal grains, and question the application of single value of AME or AMEn for broilers at different ages, which can under- or over-estimate the energy utilisation.

Therefore, to enhance the precision of feed formulation and production efficiency, age-dependent AME and AMEn values should be used when formulating broiler diets. Moreover, as the methodology (direct vs. substitution methods) can have an impact on metabolisable energy content of feed ingredients, future studies are warranted to evaluate the AME and AMEn content of cereal grains using the substitution method.

From the Proceedings of the APSS 2021