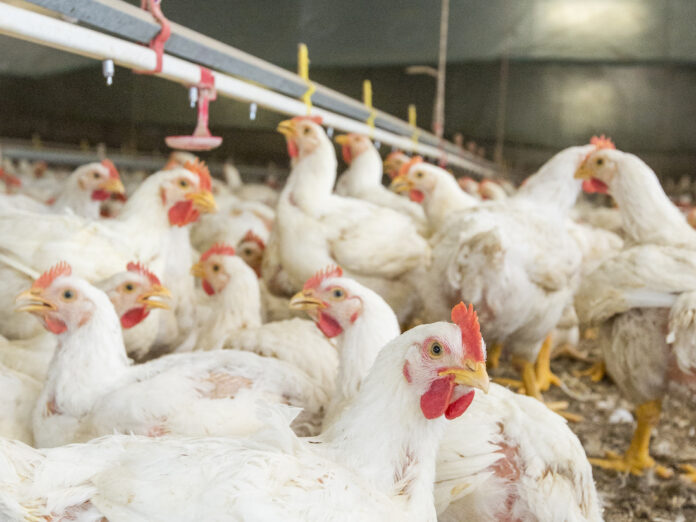 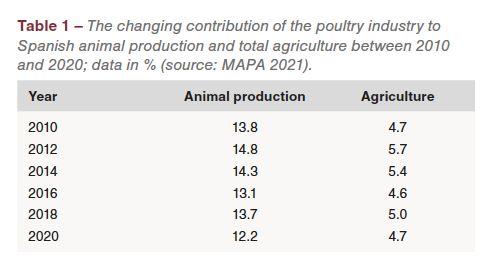 In 2020, Spain ranked in second place behind Poland in poultry meat production with a share of 12.7% in the EU (27) production volume (Table 2). In a later part of the paper, the extraordinary dynamics since 2010 will be documented. 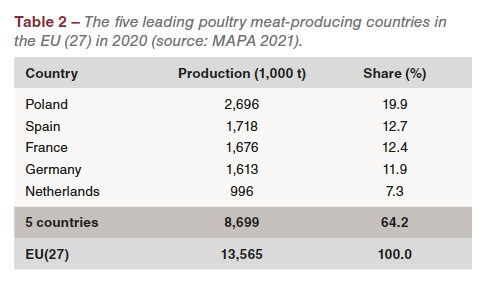 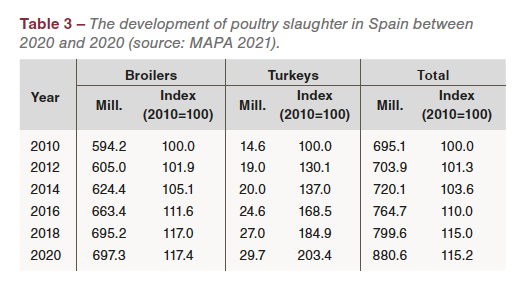 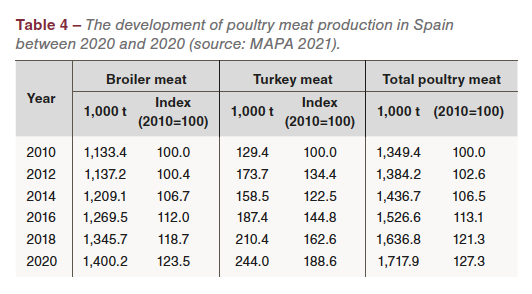 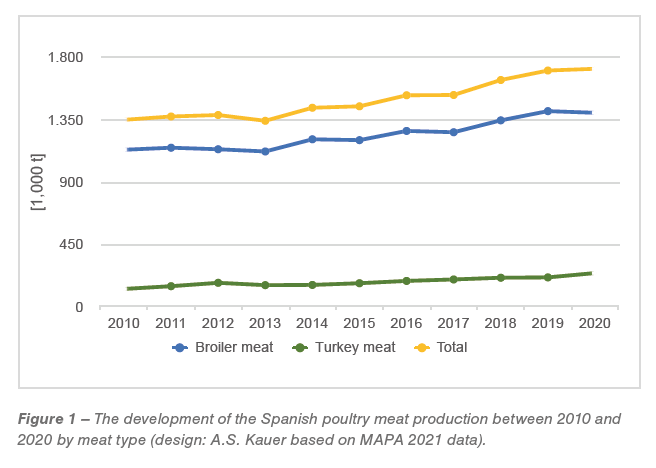 It is worth noting that the relative growth of broiler meat production was higher than that of broiler slaughter, resulting from the growth in the average slaughter weight. The opposite was the case with turkey meat, resulting from the decreasing average slaughter weight. To the total production volume of poultry meat, broilers contributed 81.5%, turkeys 14.2%. The share of ducks and geese was only of minor importance. 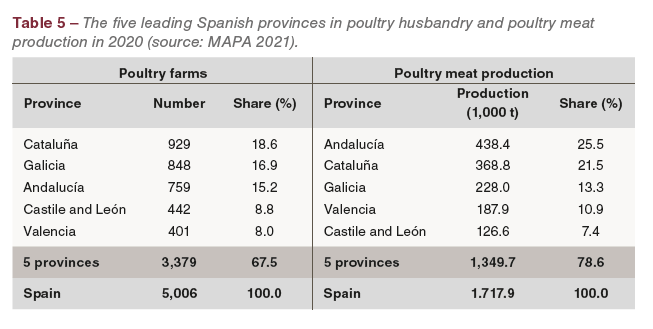 From deficit to surplus – remarkable changes in poultry meat tradeA comparison of the development of poultry meat exports and imports reveals a remarkable dynamics, exports increased considerably while the import volume declined. Despite a growing per capita consumption, from 2014 onwards, foreign trade with poultry meat showed a positive balance (Figure 2, Table 6). While the exports grew by 102,000 t or by 73.2%, imports increased by only 23,200 t or 11.9%. 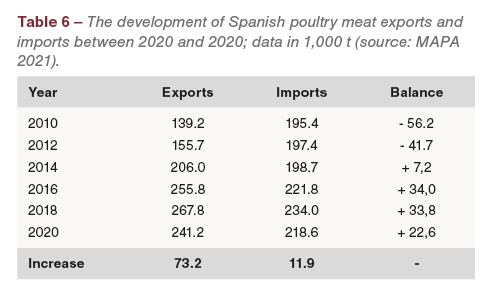 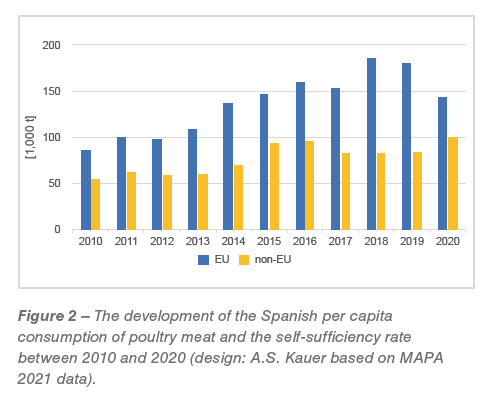 A closer look at Figure 3 shows the considerable decrease of the exports to EU member countries in the past two years. The reasons were Avian Influenza outbreaks, which resulted in import stops, and the Covid-9 pandemic, which caused a decreasing demand because of lockdowns in several countries. Figure 4 documents the lower imports from EU member countries from 2017 on. Here, too, Avian Influenza outbreaks in several countries of origin and the Covid-19 pandemic were the main steering factors. In exports as well as in imports non-EU countries gained in importance in 2020. 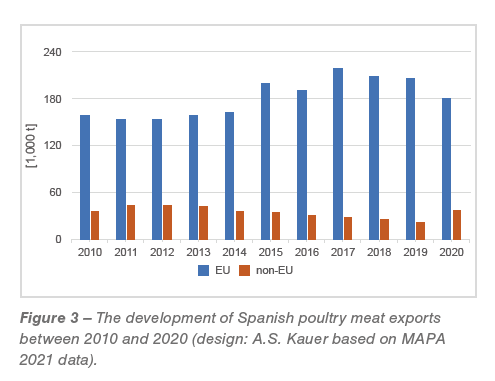 Table 7 lists the five leading countries of destination for the exports to EU (28) member countries respectively to non-EU countries. The regional concentration in intra-EU trade was extremely high. The five listed countries shared 97.3% of the export volume, Portugal and France together 79.9%. Short transportation distances, which resulted in lower costs, were an important steering factor. In contrast, the regional concentration in trade with non-EU countries was much lower. Nevertheless, the five leading countries shared over two thirds of the export volume, with South Africa in an unchallenged top position. In 2020, 59.2% of the exports to EU member countries was broiler meat and 22.7% turkey meat. With a share of 72.4%, broiler meat dominated exports to non-EU countries, followed by turkey meat with 19.2%. 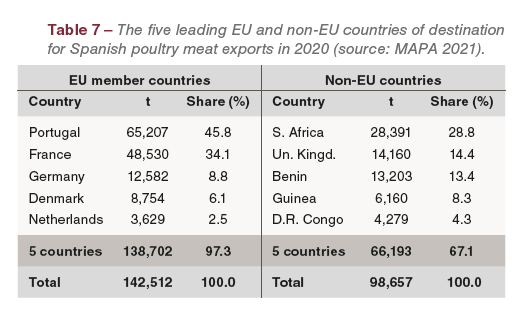 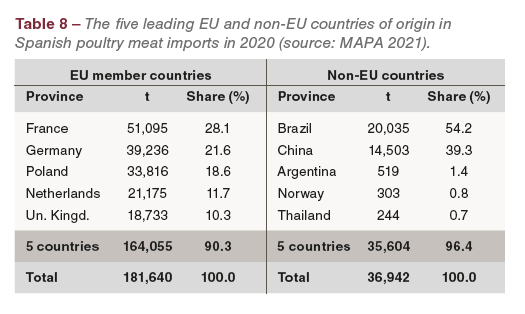 The preceding analysis of the trade relations showed that exports as well as imports decreased considerably between 2018 and 2020. Avian influenza outbreaks and the Covid-19 pandemic were the main factors, which caused the downward trend.

Despite the remarkable dynamics, production grew by over 15% between 2020 and 2015, the poultry industry lost in importance regarding the value of production because of the steep increase of the swine industry and the impacts of the Covid-19 pandemic. Avian Influenza outbreaks in 2020 led to import stops by several countries of destination for poultry meat exports; in addition, the decreasing demand because of the Covid-19 pandemic in most of these countries resulted in a considerable reduction of the export volume. Parallel to this development, imports decreased, resulting from the lower domestic demand, especially in the tourist sector, and Avian Influenza outbreaks in several countries of origin for the imports. If the downward trend can be stopped, will to a high degree depend on the future dynamics of the Covid-19 pandemic, not only in Spain.