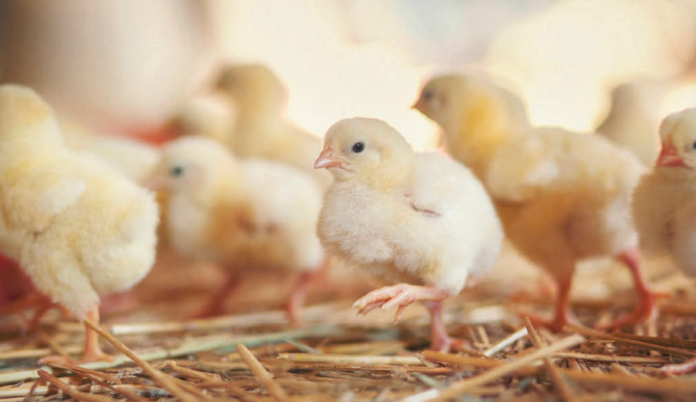 A specified minimum ventilation rate based on age of flock in weeks suggests that the amount of moisture needing to be removed from a house doesn’t really change much over the course of a week. Though this may be true towards the end of the flock, it is far from the truth during brooding. The objective is to make adjustments to minimum ventilation fan settings at the first sign that house moisture levels are building, before moisture levels build to the point where the litter cakes over.

University of Georgia, College of Agricultural and Environmental Sciences 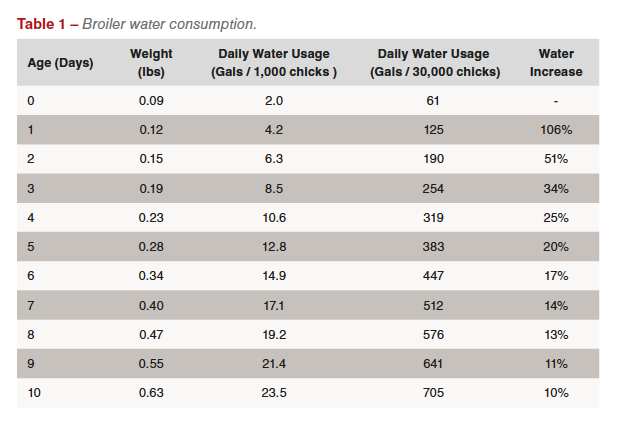 It stands to reason that as water intake increases dramatically, the amount of moisture the birds are adding to the air and litter in a house will increase in a similar dramatic fashion. Since our goal is to maintain a relatively constant, low litter moisture, minimum ventilation rates need to increase roughly proportionally the amount of water the chicks are consuming each day. For instance, if the birds drink 200 gallons in a day, roughly 200 gallons of water need to be removed from the house through ventilation to maintain a constant level of litter moisture.

Though it is true that the chicks will retain roughly 20% of the water consumed to build meat, tissues, blood, etc., they are also “building” a significant number of water molecules as they chemically break down the feed in their digestive tracks. So the chicks are not only drinking water, they are also creating water from the feed. In fact, the chicks are actually producing an amount of water from the feed roughly equal to that which is being retained in the form of body tissues, etc. The net result is that for every gallon of water the chicks consume, roughly a gallon of water is added to the air and litter in the house which needs to be removed through ventilation.

Table 2 provides an example of the calculated daily minimum ventilation rates required to remove the moisture that 30,000 chicks are adding to a house over the first ten days of a flock. The values in the table were calculated assuming an outside temperature of 40oF and a relative humidity of 50%. The inside relative humidity was set at 50%. The calculated minimum ventilation rates to control moisture shown for the first few days of the flock are much lower than would typically be utilized in most poultry houses. This is because the minimum ventilation rates illustrated in Table 2 are only sufficient to remove moisture added to a house by the birds and not the additional moisture which may be added by a house’s heating system. For each gallon of propane, nearly one gallon of water is added to the air in a house. So if on Day 1, 100 gallons of propane are burned to maintain the proper house temperature the moisture added to the house by combustion of 100 gallons of propane could be equal to that added by the 30,000 birds thereby requiring a doubling of minimum ventilation rates shown in Table 2.

Another important assumption used in creating Table 2 is that ALL the fresh air brought into a house is entering through air inlets and is properly heated and dried before moving down to floor level. Cold air entering through cracks, loose-fitting doors, fan shutters, curtains, etc., can quickly fall to the floor and since its moisture-holding ability is lower than warmed air which entered through the air inlets, it is less effective in removing moisture from the litter. As a result, the looser the house, the more the minimum ventilation rates show in Table 2 would need to be increased to compensate for the fact that the air moving over the litter is cooler and wetter than if it would have been had it entered through the house’s side wall inlets. Last but not least, the minimum ventilation rates provided in Table 2 assume that there is little to no ammonia present and that carbon dioxide concentrations are at an acceptable level. 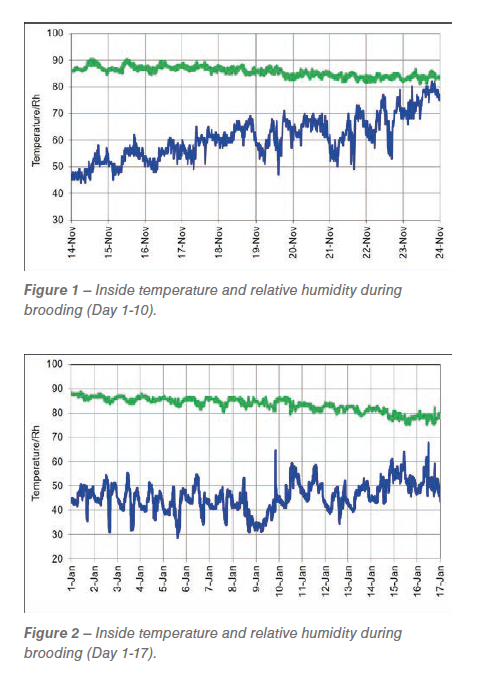